After Defrocked Cardinal Theodore McCarrick Charged with Sexual Assault, Another Alleged Victim Sues Him and an Opus Dei Priest 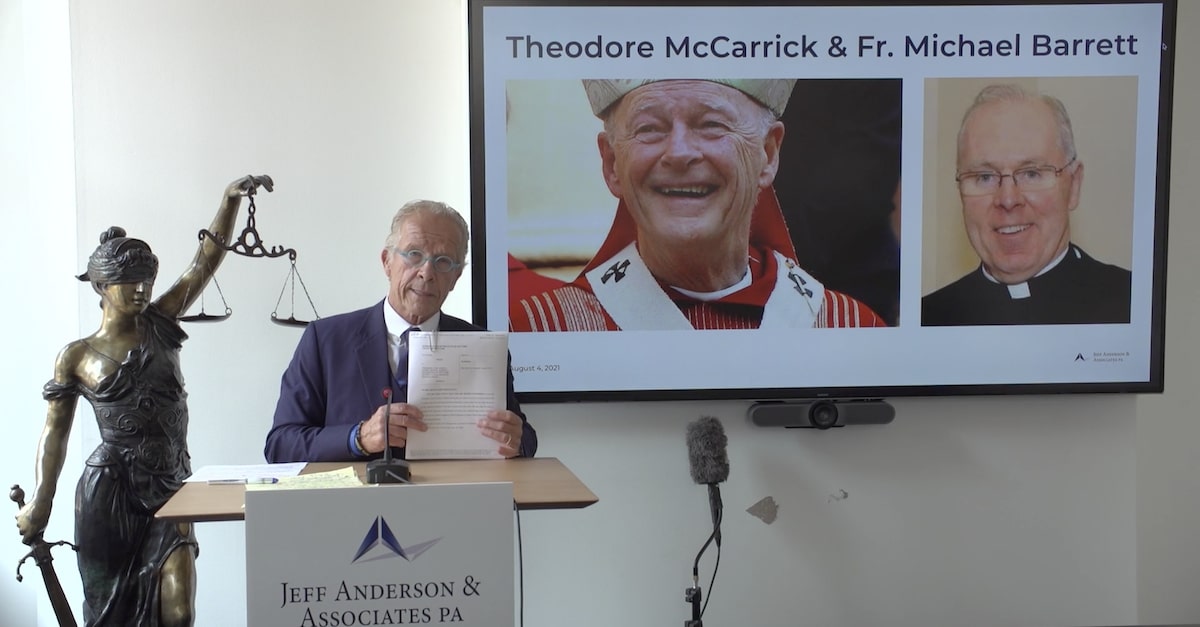 Just days after a graphic criminal complaint charged defrocked Cardinal Theodore McCarrick with sexually assaulting a 16-year-old boy, another alleged victim has stepped forward anonymously in a civil lawsuit against McCarrick and an Opus Dei priest serving as a pastor in the Archdiocese of New York.

The new lawsuit claims that McCarrick sexually assaulted “at least 8 minor boys” between 1970 and 1990.

“In 1992 and 1993, a series of six anonymous letters and one pseudonymous letter were sent to the National Conference of Catholic Bishops, the Apostolic Nuncio and various United States Cardinals accusing McCarrick of pedophilia,” the lawsuit states. “One of the letters also indicated that authorities in Rome had known about McCarrick’s ‘proclivity for young boys’ for decades.”

More than two more decades would pass before the Vatican defrocked McCarrick after finding him guilty of sexual abuse in 2019, releasing a report the next year about its institutional knowledge.

A man going by the pseudonym “JA-140 Doe”—and represented by noted attorney Jeff Anderson, known for representing alleged victims of childhood sexual assault—claims that McCarrick abused him between 1975 to 1978, when he was 13 years old until he was 16.

“In this lawsuit, this courageous survivor named two very powerful and prominent offenders,” Anderson said, referring to McCarrick as a “serial offender well-known to us.”

Now in his 50s, the man alleges that Fr. Michael Barrett abused him between 1974 and 1978 (when the alleged victim was between the ages of 12 and 16). The lawsuit says Barrett joined Opus Dei around 1974 as a lay member. Barrett’s bio at the Church of St. Agnes in New York notes the he was not ordained a priest until 1985.

“My youth, my childhood was robbed from me,” the alleged victim said in a pixelated video scrambling his voice and image. “My happiness as a child was taken from me, by being abused by two people involved in the Catholic Church.”

In the lawsuit, the man blames the “culture of the Catholic Church” for pressuring him to remain silent for decades.

“I’m a grown man, who’s standing up for himself and for others who were abused,” he said in the video. “And I will continue this way, to whatever ends it comes through. I’m not going anywhere.”

His lawyers urged any of McCarrick and Barrett’s other alleged victims to step forward before the Child Victims Act window closes for their lawsuit on Aug. 13 this year.

The man’s other lawyer Mike Finnegan confirmed his client is a different alleged victim than the complainant behind McCarrick’s recent criminal charges.

The criminal complaint alleged that McCarrick abused a teen boy on June 8, 1974, a date the victim recalled because “it occurred at his brother’s wedding reception.” The abuse allegedly occurred in a “coat room kind of closet in the front area with a table and two chairs,” where McCarrick allegedly closed the blinds and said that he needed to go to confession.

“McCarrick then leans in and kisses his penis and then ‘stays over it saying prayers to make me feel holy,’” according to the criminal complaint.

The civil complaint alleges five counts, including sexual battery and negligence against McCarrick, Barrett, the Archdiocese of New York and unknown Does whose identities the lawyers hope to learn during the proceedings.

The Archdiocese of New York and Opus Dei, which is not named as a defendant, did not immediately respond to emails requesting comment.