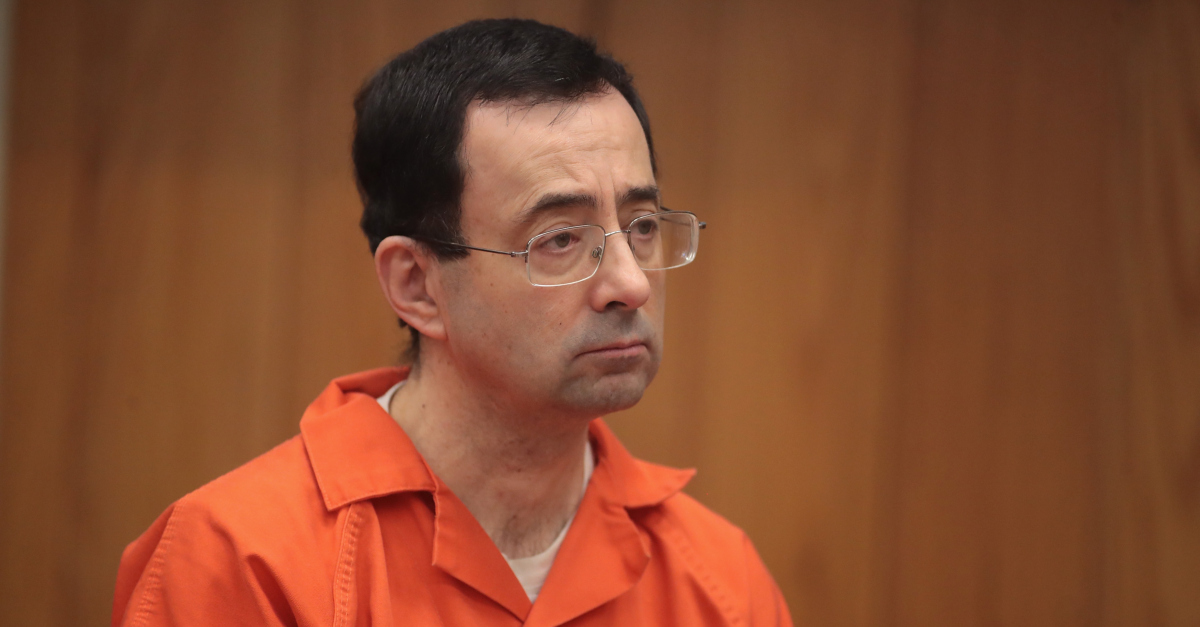 “On order of the Court, the application for leave to appeal the December 22, 2020 judgment of the Court of Appeals is considered, and it is denied, because we are not persuaded that the questions presented should be reviewed by this Court,” said the state Supreme Court’s order, which was issued Friday.

Nassar pleaded guilty in November 2017 to seven counts of first-degree criminal sexual conduct in connection with his sexual abuse of scores of gymnasts while he was working at Michigan State University and as a doctor for USA Gymnastics.

“Our constitution does not allow for cruel and unusual punishment,” Aquilina said after watching a victim’s video statement on the first day of Nassar’s sentencing hearing. “If it did, I have to say I might allow what he did to all of these beautiful souls, these young women in their childhood, I would allow someone or many people to do to him what he did to others.”

“Our country does not have an eye for an eye and Michigan doesn’t have the death penalty so I don’t know how to answer how much is a young girl’s life worth, but I have children of my own and there’s not enough gold in the planet that would satisfy that question,” the judge also said at the time.

Aquilina ultimately sentenced Nassar in January of 2018 to 40 to 175 years in prison.

“I just signed your death warrant,” Aquilina told Nassar, now 58, when she issued her sentence.

In a 2-1 majority, a three-judge panel on the Michigan Court of Appeals upheld Nassar’s sentence. The majority’s ruling said that Aquilina’s remarks, particularly those in which she lamented that she could not give Nassar the death penalty, were “wholly inappropriate.”

“[T]he suggestion that a judge would allow or support the physical or sexual assault of a defendant in prison, regardless of how abhorrent that defendant’s conduct may be, erodes public confidence in the judiciary and casts doubt on whether a defendant’s due process rights were followed,” Michigan Court of Appeals Judges Thomas C. Cameron and Michael F. ​Gadola said in the majority opinion.

Judge Douglas B. ​Shapiro went further in his dissent, saying that that the “process by which this sentence was imposed challenges basic notions of judicial neutrality, due process, the right to counsel, and the use of social media by judges.”

In its ruling Friday, the Michigan’s Supreme Court ruling similarly acknowledged some of its own misgivings.

“We share the concerns of both the Court of Appeals majority and dissent about the conduct of the sentencing judge in this case and seriously question whether the majority committed error by affirming the trial court’s denial of defendant’s motion for disqualification and motion for resentencing,” the state Supreme Court said.

However, the justices indicated that Nassar didn’t meet the “heavy burden” required to disqualify a judge. The justices also cited the specifics of the case.

“[W]e conclude that the jurisprudential significance of any holding from this Court would be seriously limited, as the question of this judge’s impartiality or bias arises in markedly fact-specific circumstances, involving an unusually high-profile and highly scrutinized case, and a unique sentencing procedure,” the Michigan justices said.

The justices also noted that the sentence was “within the range agreed upon in the parties’ plea and sentencing agreement.”

“For these reasons, we decline to expend additional judicial resources and further subject the victims in this case to additional trauma where the questions at hand present nothing more than an academic exercise,” the ruling said.

“We know it is never easy for the survivors to see this man’s name back in headlines; it is our sincere hope this development marks the closure so many were still waiting for,” Nessel said in a statement. “His sentence has been upheld on multiple occasions now, and this denial only confirms his remaining years will be spent behind bars. We remain indebted to the brave voices that ultimately put him there.”

The state Supreme Court’s ruling is likely welcome news for survivors of Nassar’s abuse, many of whom have recently filed claims against the FBI for its alleged failure to promptly and thoroughly investigate credible claims of abuse by Nassar.

Editor’s note: This story has been updated to reflect comment from Attorney General Dana Nessel’s office.