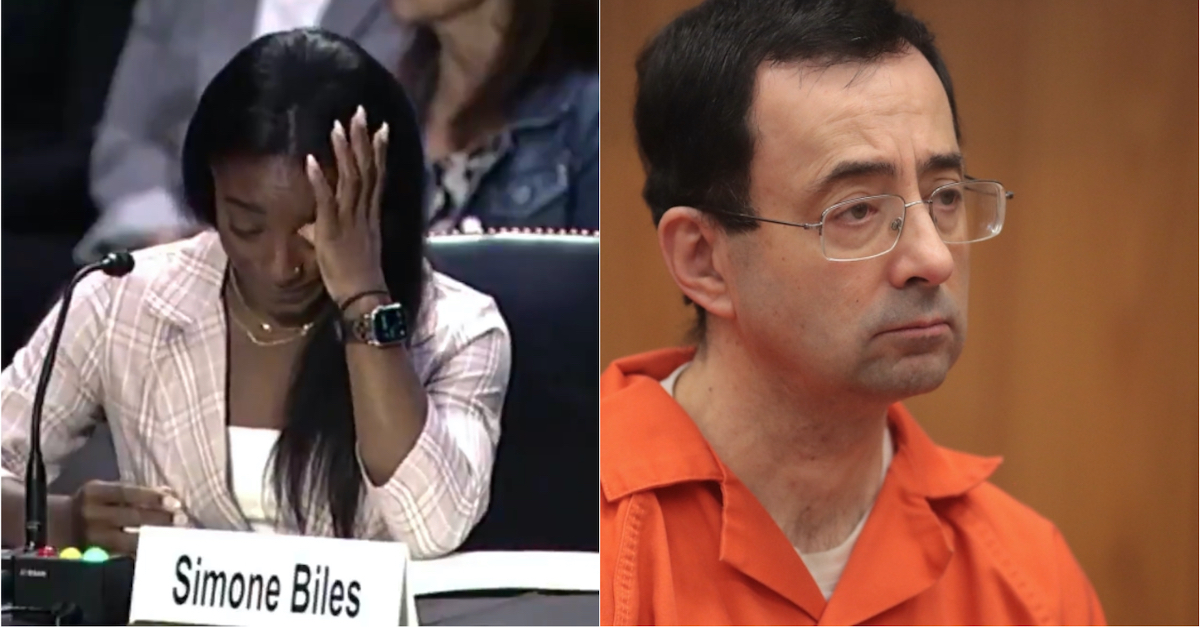 More than 90 U.S. gymnasts filed claims against the FBI over its alleged failure to protect young athletes from Larry Nassar, even after the federal agency had received several credible reports of sexual abuse by the one-time team doctor for USA Gymnastics.

“Survivors of the sexual abuse by Dr. Larry Nassar, the former National Medical Coordinator and team physician for USA Gymnastics filed Collective Administrative Claims today against the FBI for its mishandling of credible complaints of sexual assaults by Nassar received by the agency in July 2015,” lawyers for Simone Biles, McKayla Maroney, Aly Raisman, Maggie Nichols and others announced in a press release Wednesday.

According to the announcement, more than 90 claims have been filed, and the majority of the claimants are “young women and girls who were abused after 2015 due to the FBI’s failure to take required steps to protect them.”

They are reportedly seeking more than $1 billion in damages. The FBI’s requested budget for its 2022 fiscal year is just more than $10 billion.

In 2021, a report from the Department of Justice’s Office of Inspector General (OIG) revealed that the FBI’s Indianapolis field office had received credible complaints in July 2015 from several sources that Nassar had been sexually abusing young athletes. The agency, however, didn’t take action, and in fact ended what appeared to be a half-hearted investigation after determining that the office “had no connection to any of the alleged illegal activity,” which had taken place in Michigan.

Agents in Indiana did not alert state or local authorities about the allegations. Nor did they transfer the case the FBI in Michigan, as they were advised to do in September of 2015, even though it appears that they lied about even doing that.

Months later, in May of 2016, officials with USA Gymnastics made the same allegations about Nassar, this time with the FBI’s field office in Los Angeles. Agents there reached out to Indianapolis; a representative of that field office reportedly said that they had filed a formal FBI complaint form, although no such form was ever found.

While the Los Angeles office pursued an investigation into Nassar, it did not alert local authorities in the midwest.

In fact, the Lansing Resident Agency—the office to which the Indianapolis agents had been advised to transfer the case back in July of 2015—only learned about the allegations against Nassar through a series of local news articles published during the summer of 2016.

During that time, Nassar continued to abuse and victimize the young athletes ostensibly in his care.

“FBI officials, in sworn testimony to Congress, apologized and admitted that FBI employees failed to properly perform their basic duties and ethical obligations,” the lawyers’ press release said. “As a result, children and young women suffered grievous injuries at the hands of Larry Nassar.”

“[T]he FBI was grossly derelict in their duties by declining to interview gymnasts who were willing to talk about the abuse, failing to transfer the complaint to Lansing Michigan where Nassar was continuing to abuse girls, ignoring its obligation to report child abuse to relevant state and federal agencies and lying to Congress, the media and FBI headquarters about their lack of diligence in investigating the Nassar complaint,” lawyers for the gymnasts said in the press release Wednesday. “As a result, Nassar continued his predatory behavior, sexually assaulting approximately 90 young women and children between July 28, 2015, and September 12, 2016.”

Collective Administrative Claims are somewhat different from traditional civil lawsuits, because FBI officials, as federal employees, are largely protected from such lawsuits under the doctrine of sovereign immunity.

The claims were filed weeks after the FBI announced that it would not pursue criminal charges against two FBI agents who allegedly mishandled the complaints, saying in a May 26 statement that while the OIG report “outlined serious concerns” about the agents’ handling of the initial complaints, “the Principles of Federal Prosecution require more to bring a federal criminal case.”

Survivors of Nassar’s abuse see that decision as yet another failure on the part of law enforcement.

“My fellow survivors and I were betrayed by every institution that was supposed to protect us—the US Olympic Committee, USA Gymnastics, the FBI and now the Department of Justice,” Maroney said in the press release. “I had some hope that they would keep their word and hold the FBI accountable after we poured out our hearts to the U.S. Senate Judiciary Committee and begged for justice. It is clear that the only path to justice and healing is through the legal process.”

Read their claim, below: