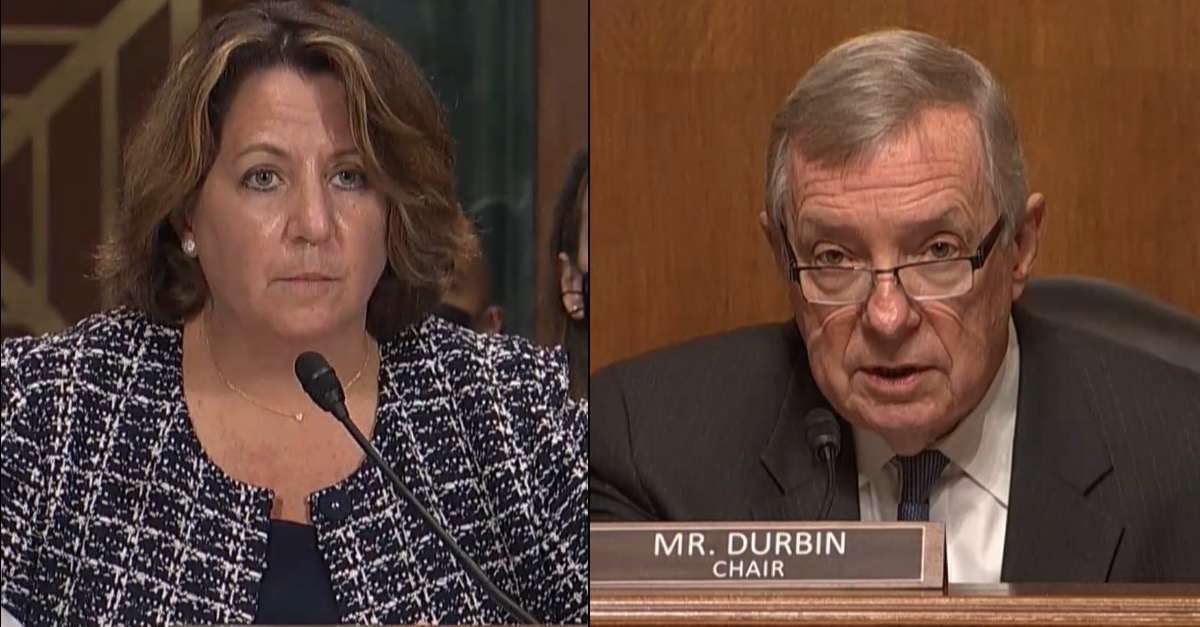 The U.S. Department of Justice is reconsidering its prior decision not to prosecute FBI agents who mishandled reports of abuse at the hands of former USA Gymnastics national team doctor Larry Nassar. That’s according to testimony from a top DOJ official Tuesday.

The revelation came during questioning by Sen. Dick Durbin (D-Ill.), chair of the Senate Judiciary Committee, during a hearing on renewing the Violence Against Women Act.

According to a July report from the DOJ’s Office of the Inspector General (OIG), FBI officials in Indiana and California failed to effectively respond to the sexual abuse allegations against Nassar, who was ultimately revealed to have hundreds of victims. Officials at the Indianapolis office also lied about their actions, claiming that they had transferred the case to FBI offices in Michigan when they had not actually done so, according to the OIG report.

The Indianapolis field office first learned of the allegations in 2015. The agency’s failures to pursue the allegations effectively allowed Nassar’s abuse to continue for more than a year, with at least “70 or more young gymnasts” suffering abuse as a result, the OIG report said.

The DOJ declined to prosecute the agents involved in the investigation in September 2020, the OIG report also said.

“The American people want child predators — like Larry Nassar — and anyone who aids in their crimes held accountable,” Durbin said at Tuesday’s hearing while teeing up a question for the DOJ. “Many people, including myself, my colleagues, and the gymnasts who testified expressed shock and dissatisfaction with the Department’s decision to decline prosecution of the FBI agents who not only mishandled the Nassar investigation, but clearly lied to the Inspector General’s office . . . and yet the decision not to prosecute is one which most of us clearly don’t understand. What is your response to the criticism over the Department’s decision not to prosecute these FBI agents?”

“I can inform the Committee today that the recently confirmed Assistant Attorney General for the Criminal Division is currently reviewing the matter, including new information that has come to light,” Deputy Attorney General Lisa Monaco responded. “In light of that review, I think you will understand Mr. Chairman that I am constrained in what more I can say about it. But I do want the Committee, and frankly, I want the survivors to understand how exceptionally seriously we take this issue and believe that this deserves a thorough and full review.”

Tuesday’s hearing comes weeks after a Sept. 15 hearing, also chaired by Durbin, about the OIG report and the FBI’s handling of the Nassar investigation. The hearing included powerful testimony from champion gymnasts Simone Biles, McKayla Maroney, Maggie Nichols, and Aly Raisman—all of whom were assaulted and victimized by Nassar.

The DOJ did not participate in that September hearing, despite the committee’s invitation.

At the time, Durbin said the OIG report painted a “shocking picture of FBI dereliction of duty and gross incompetence.” The committee’s top Republican, Sen. Chuck Grassley of Iowa, said that the FBI “severely let down dozens of teenage girls, several of whom bravely came forward in 2015 to report their abuse.”

In 2018, Nassar was sentenced to up to 175 years in prison by a Michigan state judge.

Watch Monaco tell Durbin about the renewed investigation, below.