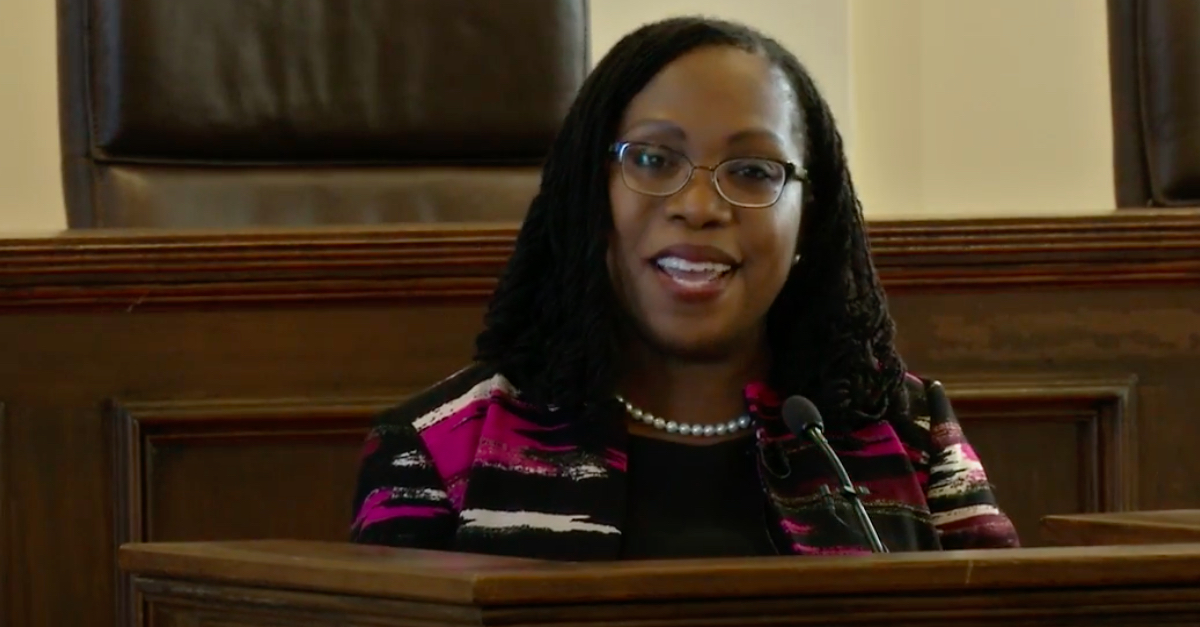 President Joe Biden on Tuesday announced his first batch of nominees for the federal bench, unveiling a historically diverse group of jurists that signals a radical shift from the previous administration, which overwhelmingly nominated white men with prosecutorial experience.

Leading the pack of 11 jurists is U.S. District Judge Ketanji Brown Jackson, who is slated to take over the seat vacated by recently confirmed U.S. Attorney General Merrick Garland on the U.S. Court of Appeals for the District of Columbia. Her elevation to the D.C. Circuit—regarded as the second-most-important court in the nation—makes Jackson a likely favorite for a potential spot on the Supreme Court, should the opportunity arise.

The Barack Obama appointee, a graduate of Harvard Law School and former public defender, was reportedly seriously considered for the 2016 nomination to the high court that eventually went to Garland. Garland’s nomination was, of course, blocked by Mitch McConnell. Jackson is a former clerk of Justice Stephen Breyer. Many think the 82-year-old Breyer is the most likely justice to step down during Biden’s first term. Jackson made waves in Nov. 2019 when she issued a scorching opinion on the subpoena Congress issued to former White House counsel Don McGahn.

“[W]hen DOJ insists that Presidents can lawfully prevent their senior-level aides from responding to compelled congressional process and that neither the federal courts nor Congress has the power to do anything about it, DOJ promotes a conception of separation-of-powers principles that gets these constitutional commands exactly backwards,” the judge wrote. She said ruling otherwise would have put the U.S. on a path to “tyranny.”

“These nominees consist of attorneys who have excelled in the legal field in a wide range of positions, including as renowned jurists, public defenders, prosecutors, in the private sector, in the military, and as public servants at all levels of government,” the White House said in a statement.

In addition to all three circuit court nominees being Black women—two of whom were former public defenders—the group has several other potential trailblazers. Judge Zahid Quraishi, who was nominated for the New Jersey District Court, would be the first Muslim to serve as a federal judge. Additionally, Judge Florence Pan would be the first Asian-American woman on the D.C. District Court and Lydia Griggsby would be the first woman of color to serve on the federal bench in the state of Maryland.

“This trailblazing slate of nominees draws from the very best and brightest minds of the American legal profession,” Biden said in a statement. “Each is deeply qualified and prepared to deliver justice faithfully under our Constitution and impartially to the American people — and together they represent the broad diversity of background, experience, and perspective that makes our nation strong.”

“There is so much that can (and will) be said about the terrific slate of judicial candidates the Biden Administration just put forward,” wrote Duke University School of Law professor Marin K. Levy. “Here’s one – at a time when women make up only 30% of the federal judiciary, it is not for nothing that 9 out of the 11 candidates are women.”

This is a tremendously impressive slate of Biden nominees, led by a superb choice for the seat vacated by Garland. Brilliant, diverse, experienced, judicious, forward-leaning, open-minded. Bodes well for the future. https://t.co/rJAfSHWMkR