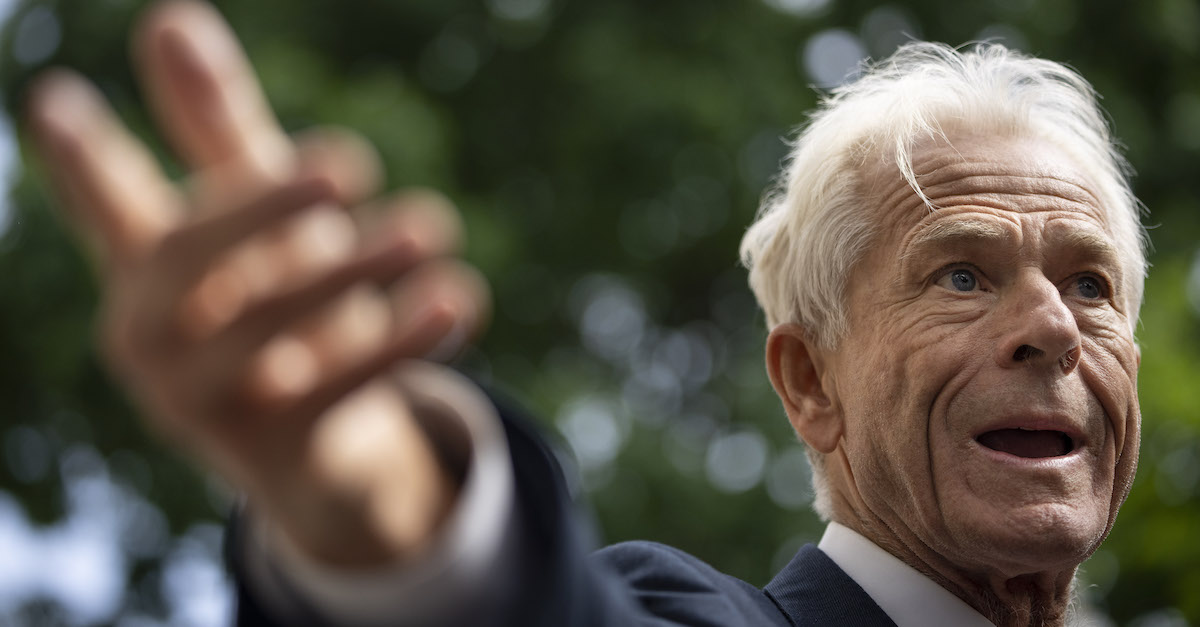 On the day of Peter Navarro’s arrest earlier this month, FBI agents read the ex-Donald Trump adviser his Miranda warnings and agreed to loosen his handcuffs, until he was no longer in pain. The arresting agents allowed him to call his attorney, but the self-represented Navarro did not have one.

“I’m supposed to be on live television tonight,” Navarro allegedly told agents. “I’d like to call the producer and tell him I’m not going to be there. Can I have my phone?”

When the FBI informed him an attorney could handle such arrangement, Navarro called his arresting agents “kind Nazis.”

“How you could live with yourselves?” Navarro asked them.

So reads the three-page FBI report of Navarro’s arrest for contempt of Congress at Reagan International Airport on the morning of June 3.

Federal prosecutors included the FBI’s account of Navarro’s invective as an attachment to a 6-page motion refuting his “false” statements about his access to counsel and conditions of arrest.

“The Defendant has made numerous false statements in the press about his arrest—for example, that he was deprived of food and water,” Assistant U.S. Attorney Amanda R. Vaughn wrote in a footnote to the motion. “In fact, when he asked, he was offered food and water, took it, then asked if he wanted more.”

Indeed, the FBI’s notes indicate that authorities made this offer shortly after Mirandizing Navarro.

“At 11:32 a.m., the FBI vehicle transporting Navarro arrived at Washington Field Office,” the notes states. “Navarro was fingerprinted, photographed, and DNA sample taken. During this process, Navarro was provided water. Navarro was offered food, but declined. Navarro was asked if he needed to see a medic but declined.”

Within an hour, Navarro apparently changed his mind about the food and said he was “hungry and thirsty,” according to the notes.

“At 12:03 p.m., a bottle of water, chocolate, nuts, and dried fruit was provided to Navarro,” the FBI wrote. “Navarro was asked if he wanted anything else to eat or drink which he declined.”

Providing a detailed glimpse into the morning of Navarro’s arrest, the prosecutor’s motion asks a federal judge to reject his request to delay his case by 45 days in order for him to get a lawyer and prosecute his civil lawsuit.

The Justice Department says Navarro rejected an offer for counsel.

“The Defendant refused counsel when it was previously offered and insisted that he would proceed pro se; now that he has apparently changed his mind with respect to representing himself, he still has a week to secure counsel before his arraignment,” the memo states. “In addition, he cites no authority under which a speedy trial can be delayed to allow a civil case to proceed.”

Prosecutors urged the judge not to let Navarro run out the clock.

“Any delay for the Defendant’s civil lawsuit is particularly unwarranted here, where the Defendant filed the suit in an attempt to halt the criminal investigation relating to the pending charges,” they noted in their motion.

They also called it “disingenuous” for Navarro to “blame the government for his lack of counsel when his decision to proceed without one to date was his decision alone.”

Such a request, prosecutors say, is also unnecessary.

“He has over a week remaining to secure counsel in a timely fashion—to contact and interview
possible counsel or file the financial disclosure forms required for counsel to be appointed,” the motion states.

In an email to Law&Crime, Navarro insisted that he was being reasonable.

“I made several requests to make a call for legal advice at the time of the arrest,” he wrote. “This was denied and my phone was confiscated. The record is clear on this. The record is also clear that I have requested the continuance to provide a reasonable time to find legal representation for a case that is unprecedented in our history. This is a reasonable request that I’m asking the court at its discretion to grant.”