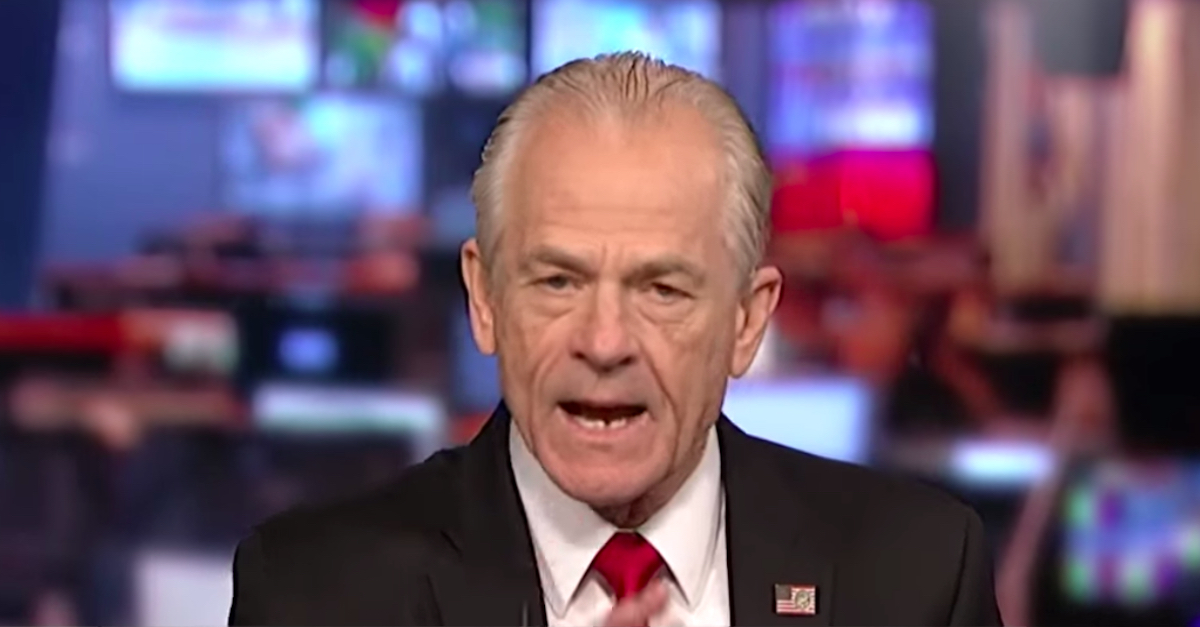 Peter Navarro, former President Donald Trump‘s trade advisor, has been indicted for criminal contempt of Congress for refusing to comply with a subpoena from the House committee investigating the Jan. 6 attack on the U.S. Capitol.

The House Committee said it “had reason to believe that Navarro had information relevant to its investigation,” the DOJ press release said, noting that while Navarro had served as an advisor to Trump “on various trade and manufacturing policies,” he has been a private citizen since departing the White House on Jan. 20, 2021.

“We Look Forward to Discussing Them with You, Too.”

According to the indictment, the House committee noted several instances in which Navarro appeared to publicly acknowledge that he and others in Trump’s inner circle, including former chief strategist Steve Bannon, took specific steps to try to block Congress from certifying Joe Biden’s 2020 electoral win, as required by the Constitution.

It was anger over that certification process that spurred thousands of Trump supporters to storm the Capitol on Jan. 6, lawmakers and staffers inside to evacuate or shelter in place as the certification was temporarily stopped.

Based on publicly available information and information produced to the Select Committee, we believe that you have documents and information that are relevant to the Select Committee’s investigation. For example, you, then a White House trade advisor, reportedly worked with Steve Bannon and others to develop and implement a plan to delay Congress’s certification of, and ultimately change the outcome of, the November 2020 presidential election. In your book, you reportedly described this plan as the “Green Bay Sweep” and stated that it was designed as the “last, best chance to snatch a stolen election from the Democrats’ jaws of deceit.” In an interview, you reportedly added that former President Trump was “on board with the strategy”, as were “more than 100” members of Congress . . . . You also released on your website a three-page report . . . repeating many claims of purported fraud in the election that have been discredited by public reporting, by state officials, and courts. And, because you have already discussed these and other relevant issues in your recently published book, in interviews with reporters, and, among other places, on a podcast, we look forward to discussing them with you, too. Accordingly, the Select Committee seeks documents and a deposition regarding these and other matters that are within the scope of the Select Committee’s inquiry.

The subpoena ordered Navarro to provide the documents by appearing in person at an office in the U.S. Capitol Complex on Feb. 23, 2022. He was also instructed to appear for a deposition on March 2, 2022.

Not only did he not appear on Feb. 23, according to the indictment, but Navarro apparently didn’t communicate at all with the House committee after receiving the subpoena. His first communication to the committee was apparently on Feb. 27, in response to an email from the committee itself asking for the status of the requested documents and reminding him of his upcoming deposition date.

“President Trump has invoked Executive Privilege in this matter,” Navarro reportedly wrote in an email. “Accordingly, my hands are tied.”

When the committee replied that same day that there were topics the committee “believes it can discuss with you without raising any executive privilege concerns at all,” Navarro’s response again stated his intent not to comply.

“[The] privilege is not mine to waive,” he wrote in an email to the committee on Feb. 28, according to the indictment, adding that it would be “incumbent on the Committee to directly negotiate with President Trump and his attorneys regarding any and all things related to this matter.”

The criminal contempt charge is the second issued to a high-level Trump advisor in connection with the investigation into the Jan. 6 Capitol attack. Bannon, a former chief strategist for the former president, was indicted in November for similarly failing to comply with a congressional subpoena.

Bannon’s trial is currently set to start in July.

Prior to the criminal contempt charges against Bannon, it had been decades since such charges were filed. In the 1970s, two players involved in the Watergate scandal—G. Gordon Liddy and Richard Kleindienst—were convicted of contempt of Congress for refusing to answer questions before a House subcommittee. The last time criminal contempt of Congress charges were filed was in 1982, when former federal environmental official Rita Lavelle refused to answer questions about her removal as the head of a toxic waste disposal program at the Environmental Protection Agency. At the time, the agency was run by Anne Gorsuch Burford, mother of current Supreme Court Justice Neil Gorsuch.

Bannon, like Navarro, has claimed that Trump’s assertion of executive privilege bars him from appearing before the committee. U.S. District Judge Carl Nichols, a Trump appointee, has not yet issued a ruling on that issue.

In March, the House committee investigating Jan. 6 argued that Navarro, along with Trump’s former social media director Daniel Scavino, should be held in contempt of Congress for refusing to cooperate with the committee’s subpoenas.

The House Select Committee to Investigate the Jan. 6 Attack on the U.S. Capitol, which is set to hold public hearings starting next week, did not immediately respond to Law&Crime’s request for comment.