Father and Son from New York State Get Home Confinement, Probation for Storming Capitol Together on Jan. 6 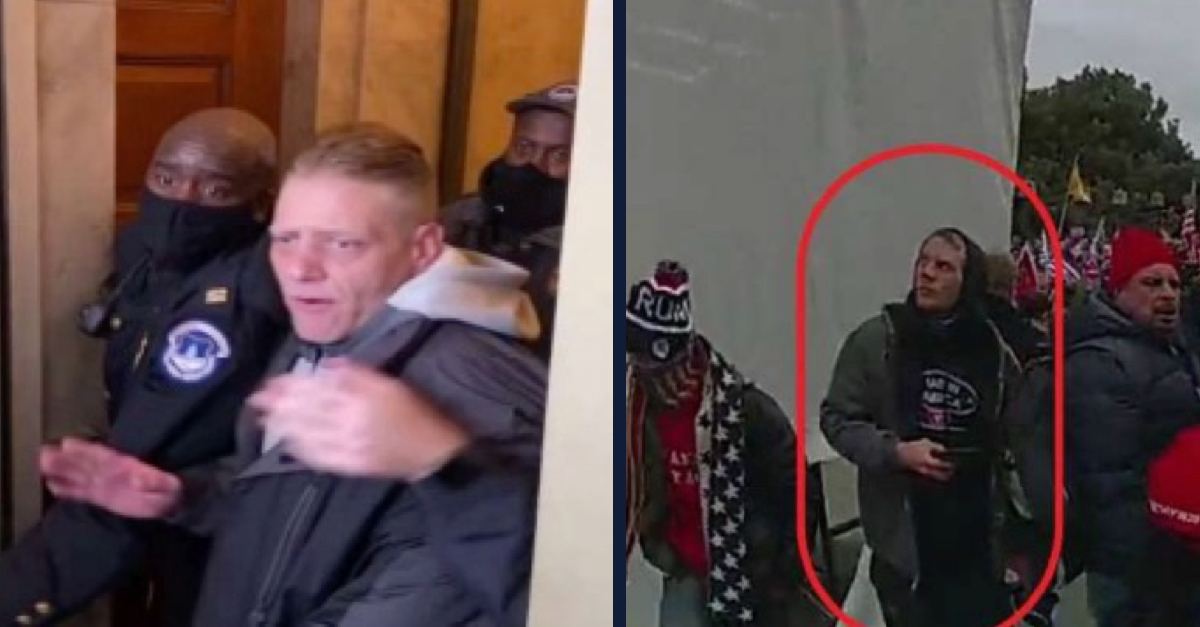 A father-and-son pair from New York State who took a trip to Washington D.C. in an “attempt to bond” and ended up storming the Capitol have been sentenced to home confinement.

William Michael Sywak, 46, and his son William Jason “Billy” Sywak, 28, set out together from the Empire State on Jan. 5 and arrived in Washington on Jan. 6 at around 1:00 p.m. Although they apparently intended to attend Donald Trump‘s so-called “Stop the Steal” rally, court documents say that William and Billy headed straight for Capitol grounds.

They made their way up to the West Plaza, recording video on their cell phone as smoke and pepper spray filled the air. They were just five minutes behind the first rioters to breach the building, and surveillance video shows the Sywaks walking through the doors as others jumped through windows. They made their way to the Capitol Crypt, where prosecutors say they joined a crowd that ultimately overwhelmed police. They spent around 20 minutes inside the building.

The men pleaded guilty in February to one count each of parading, demonstrating, or picketing in the Capitol building, a misdemeanor punishable by up to six months behind bars. Prosecutors had sought jail time for both men: 30 days for William and 45 days for Billy.

Instead, Contreras, a Barack Obama appointee, sentenced William to two years of probation, including four months of home confinement. He sentenced Billy to 12 months of probation, including two months of home confinement. That sentence allows both men to leave their home for essential purposes such as work, medical appointments, religious services, attorney meetings, and court-ordered appearances.

“It would not be prudent to impose [jail time] given the Covid pandemic,” Contreras said, although he did tell William that that decision was also due to some lucky timing.

William, whose extensive criminal history includes convictions for sexual misconduct, harassment, DUI, impaired driving, disorderly conduct, and assault, had been on probation until just one month before he went to Washington. Contreras told him that if he still been on probation at the time, he would have landed behind bars.

“It’s unfortunate for the world but gives you a break in this situation,” the judge said. “I don’t intend to incarcerate you, even though I gave it serious thought because of your criminal history.”

According to court filings, the trip was an attempt to repair a frayed relationship between the two men, with Billy taking it “as an opportunity to start fresh and bond with his father,” according to the younger man’s sentencing memo.

William is “ashamed that he drove his son to Washington,” the elder Sywak’s sentencing memo says, echoing his son’s sentiment. “What started off as an attempt to bond with his son blew up. He expresses the fact that he lives with guilt every single day for what he has done.”

Prosecutors, however, didn’t quite buy this explanation.

Assistant U.S. Attorney Emily Allen pointed to texts Billy had exchanged with his fiancé as he and his father made his way down to D.C..

“President isn’t going to hand it over when there is fruad [sic] I’m so pumped,” Billy responded.

At around 3:00 p.m., an associate texted Billy on Snapchat: “Duuuudeyou rioting??”

“Fuck yeah you got my snapchat[,]” Billy replied.

Billy’s pride in participating in the riot continued even after he and his father left Washington. Shortly after midnight on Jan. 7, Billy texted to a friend: “Fuck yeah we made history together an everyome [sic] thinks it’s a crime to have been there lol[.]”

These texts, Allen said, did not contain the words of someone just looking to bond with their dad.

“His father has taken a lot of guilt and responsibility for his son’s participation,” Allen said. “But it looks like from the evidence … that Billy Sywak was eager to participate, and certainly wasn’t following his father along.”

“If anything, it may have been the reverse,” Allen added.

Contreras pushed Billy on messages he sent after Jan. 6 apparently indicating that he was proud of his role in the riots.

“Things I seen was aw[e]some people handing me pepper spray to get into the push,” Billy said in a text to an associate.

Contreras reminded Billy of the fact that four police officers died by suicide “either immediately after the event or shortly thereafter,” and asked him what he would say to the families of those officers.

In addition to the home confinement and probation, Sywak men will have to pay $500 in restitution toward the estimated $2.7 million in damage to the Capitol.