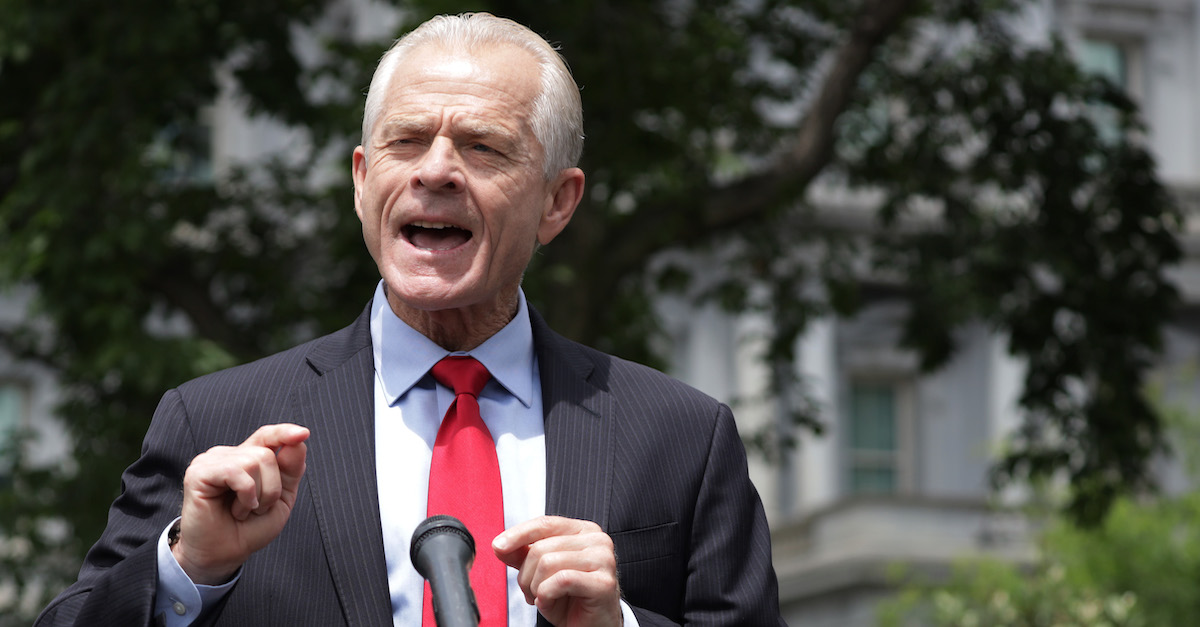 Then-Director of Trade and Manufacturing Policy Peter Navarro speaks to members of the press outside the West Wing of the White House June 18, 2020 in Washington, DC.

Donald Trump’s former trade advisor Peter Navarro made his first court appearance after being arrested and charged with criminal contempt of Congress for refusing to comply with an issued subpoenaed by the House committee investigating the Jan. 6 attack on the U.S. Capitol.

“I have some things to share with the court, if you’ll indulge me,” Navarro told Faruqui, signaling his intention to represent himself in this case despite being “happy” to be represented at the hearing by the federal public defender who had been appointed for purposes of this initial appearance.

Faruqui cautioned Navarro that he must be “100% truthful” with whatever he said in court, or risk facing additional charges, but then allowed him to continue.

“When I was arrested, I was prevented from making a phone call,” Navarro said. “They refused that. I found myself in the position of being in a jail cell without the ability to have any discussions, and here we are. I think [that is] prosecutorial misconduct. That’s not the only thing that’s happened so far, which we can talk about.”

“In all cases, the government has the obligation and duties to treat people fairly,” Faruqui said. “Not just fairly, but humanely. These are human beings, all of us here, and we have to be treated as such.”

Faruqui said that if the government’s actions rose to the level of prosecutorial misconduct, it could potentially lead to sanctions and dismissal of the case.

Navarro said that federal authorities could have arrested him while he was at home, and that he had provided the DOJ with the phone number of a lawyer they should contact.

Instead, he says, they arrested him at the airport, just as he was about to board a flight to Nashville.

“That again is prosecutorial misconduct,” he said.

Navarro accused the government of “moving preemptively” to file the criminal charges against him in response to a civil suit he filed that he says raises issues of executive privilege and testimonial immunity that should ultimately be heard by the U.S. Supreme Court.

“I want this arraignment postponed until that civil suit is allowed to go forward and I at least have a judge hear my prayer for relief and decide whether these people should be enjoined from doing exactly what they did today,” Navarro told Faruqui.

He also confirmed that he intends to represent himself at trial, saying: “I don’t want to spend my entire savings on lawyers.”

Navarro insisted that that he has “always acted ethically,” and said that the charges against him are all part of a plan.

“What’s happening to me now … is intended to eliminate two key institutions of this republic, which is executive privilege and testimonial immunity,” he said.

He also implied that he was being targeted by a nefarious government conspiracy.

“There are bigger things at play than whether I go to prison,” he said. “And that’s why I’m standing here, sir.”

“No American should be treated the way I was treated today,” he added.

The government did not appear to ask that he be detained following his initial appearance. Nonetheless, Navarro pushed back on what is generally considered standard conditions of pretrial release for people charged with federal misdemeanors.

“I’m no threat to anybody, I’m not a flight risk,” he said. “This is just more punitive actions by the Department of Justice, it seems to want to penalize me, it’s just wrong.”

Faruqui reminded Navarro that he didn’t have to get special permission to travel domestically, but only if he planned on leaving the continental United States.

“What kind of burden would that put on you?” Faruqui asked.

“It’s just an additional burden,” Navarro replied, noting that he didn’t tell the federal government that he was traveling to Nashville, and they nonetheless arrested him at the airport gate.

In the end, Faruqui kept the travel restrictions on Navarro, but didn’t revoke his passport. He also cautioned Navarro against speaking publicly, reminding him that anything he said could be used against him in court.

“There is a lot of attention upon you in this case,” Faruqui said. “Every time that you are speaking, you could potentially be putting yourself at risk.”

“Before you make these [TV] appearances, make sure you’re doing what’s in your best interest in the long term, not just the short term,” Faruqui added.

Both charges are misdemeanors. Each carries a potential one-year jail sentence and, according to the DOJ, a $100,000 fine, although that amount appeared to be in dispute at Friday’s hearing.

The House Select Committee to Investigate the Jan. 6 Attack on the U.S. Capitol had argued in March that Navarro, along with Trump’s former social media director Daniel Scavino, be held in contempt of Congress for refusing to comply with the committee’s subpoenas.

Navarro’s arraignment is set for June 17.