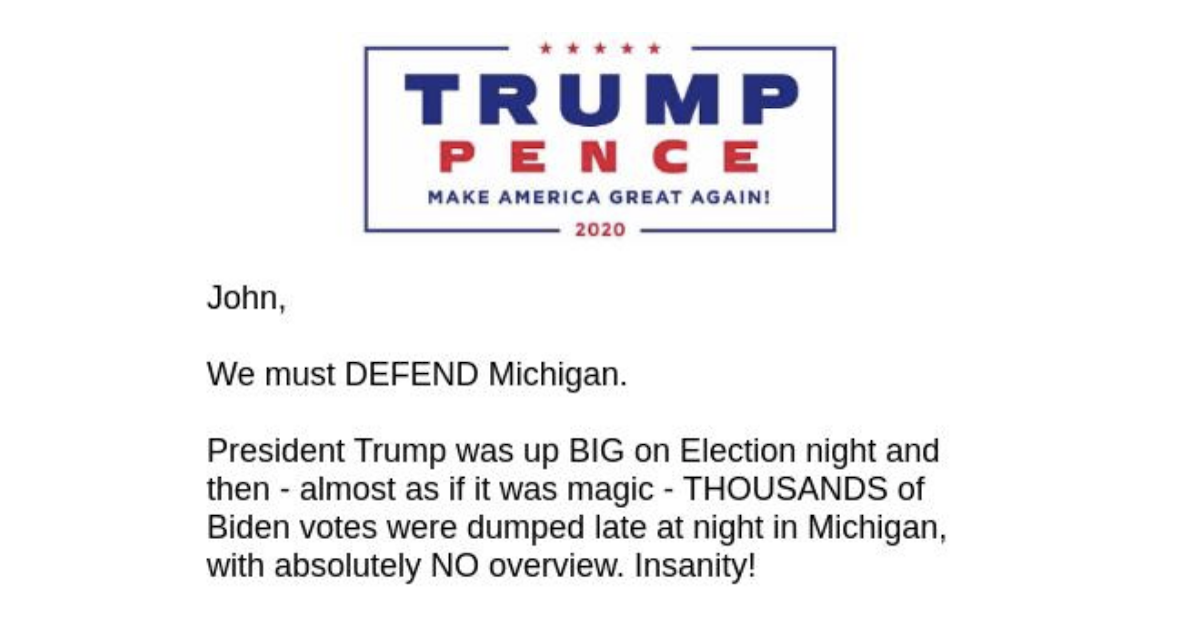 The Trump campaign sent this fundraising email filled with misinformation about the election the day after Joe Biden clinched the presidency.

These are just three subject lines from more than 20 fundraising emails that the Trump campaign sent on Sunday, overwhelmingly asking their supporters to pony up money to fund lawsuits that keep failing in court and, most serious legal experts agree, stand little to no shot of changing the outcome of the contest. In return, donors can “Help us defend the Election” and “Join the Task Force.”

The day after Joe Biden clinched the title president-elect, the solicitations of funds became more frequent. The email drive over the next 24 hours roughly quadrupled the 5.4 messages a day sent out by the Trump campaign since July 2019, according to the Archive of Political Emails, a project of the non-profit Defending Democracy Together Institute.

Corey Goldstone, a spokesman for the non-profit Campaign Legal Center told Law&Crime that financial incentives should not be overlooked in President Donald Trump’s decision to drag out the contest through the courts.

“There’s certainly a fundraising aspect to it,” Goldstone said in a phone interview.

“When you quote unquote ‘give up,’ it might be the gracious thing to do and the overall best thing for the country in terms of ensuring a smooth transition of power,” Goldstone noted. “But that’s not a good message if you’re trying to raise money for whatever the next gig is.”

The Wall Street Journal reported on Friday that the fine print of the Trump campaign’s legal defense fundraising shows half—or more—of the donation money goes to paying down campaign debts. The Republican National Committee, whose leadership has goaded the Trump campaign’s scorched-earth legal strategy, reaps up to 40-percent of some of these drives, the Journal reported.

The Trump campaign even appears to be financing off of dead litigation.

“We have filed a lawsuit in the Michigan Court of Claims to halt counting until meaningful access has been granted,” Team Trump 2020 wrote, in a sentence whose carefully worded present-perfect tense makes it technically accurate, if misleading.

That is the court where a judge dismissed the campaign’s lawsuit as premised upon “inadmissible hearsay within hearsay.” Trump’s legal team submitted a sworn affidavit by a designated poll watcher who repeated a rumor that she heard from an unidentified person about what some “other hired poll workers at her table” allegedly told her.

“Come on now,”  Michigan Judge Cynthia Stephens scoffed when she dismissed the case on Thursday, but the Trump campaign still solicited money based on that thin gruel three days later.

Ross Garber, an election litigation expert and professor at Tulane Law School, is skeptical the Trump campaign could stand to profit off of these messages in the short-term.

“I mean, to maintain all of these activities and the litigation and staff recounts and kind of keep some semblance of a campaign operation going actually is an incredibly expensive venture,” Garber said, adding that this drag would provide more of an incentive for Trump to abandon the cases than prolong them.

The long-term economic benefits for Trump are a different matter.

“If he’s thinking about doing some sort of media venture, having those people invested by way of a belief that the election was stolen is probably going to make it easier for him to bring people to whatever is next,” Garber added.

Rudy Giuliani, Trump’s personal lawyer, announced a plan to save the president’s moribund campaign on Saturday at the Four Seasons — the landscaping company on the outskirts of Philadelphia, not the four-star hotel. There, near an adult book store and a crematorium, the former New York City mayor offered some conspiracy theories and promised a new suite of litigation on Monday, which, viewed charitably, could hardly fare worse than the last set of lawsuits.

“I think they well better have something new, because that first round was a pathetic series of duds,” Elie Honig, a former Southern District of New York prosecutor and current CNN legal analyst, told Law&Crime. “It was just, I mean, they got kicked out of court almost as quickly as they could file these cases—and that’s rare. They were embarrassed over and over.”

The “triple-hearsay anecdote” in the Michigan case, Honig noted, was just one scene of the legal blooper reel.

In Georgia’s Chatham County, a judge quickly booted a Trump campaign petition in a ruling finding “no evidence” to support claims of late ballot-counting there.

In Nevada, local and national Republicans ballyhooed the case of Jill Stokke, a legally blind elderly woman who became the GOP poster child for voter disenfranchisement and the dangers of absentee voting. Stokke claimed that she tried to cast her ballot on Election Day, only to be falsely told that her mail-in ballot had been received and verified. But her allegations quickly collapsed under scrutiny.

Election authorities there gave Stokke the chance to vote with a provisional ballot and swear to her claims in a declaration, which they would investigate.

Stokke refused, she said, because signing such a document would force her to “attest to a lie.”

“I don’t think the plaintiffs have demonstrated a likelihood of success,” U.S. District Judge Andrew Gordon found in his ruling, denying Republicans an injunction that would have overhauled the system of counting votes in Clark County—which just so happens to be Nevada’s Democratic stronghold.

In a statement on Saturday, Trump glossed over this string of losses, rewriting the history as though he were starting with a clean slate.

“Beginning Monday, our campaign will start prosecuting our case in court to ensure election laws are fully upheld and the rightful winner is seated,” his statement read.

If the Round Two lawsuits in any way resemble the first, Honig predicted more courthouse follies.

“If it’s more of the same, get ready for more of the same result,” he said. “Are they gonna have some massive new revelations? I don’t know where they’re gonna come up with it.”

Offering no evidence, Trump and Republican leadership have joined together in baselessly undermining public confidence in the integrity and transparency of U.S. elections, but their depictions of a corrupt and opaque system awash in voter fraud are false. Ballot counting in precincts around the country have been live-streamed in battleground states, with observers from both parties participating in the process.

“You have one Republican for one Democrat, and these election officials, they take their job very seriously,” Goldstone noted. “And it should be remembered by all Americans that elections are local affairs. So all 50 states and the District of Columbia, they set the rules for how their elections are going to go. And so, there’s no way that some grand conspiracy could be achieved where multiple states [could collude on] some kind of orchestrated, widespread fraud effort.”

Studies by the Brennan Center call mass voter fraud a “myth,” and neither the FBI nor Trump’s own Election Integrity Commission found any evidence to suggest otherwise.

Trump’s task force found no evidence of mass voter fraud—let alone at the numbers that he absurdly claimed would have given him the popular vote edge over Hillary Clinton in 2016—before it shuttered early in his first and only term.

“The president and Bill Barr have been trying their damnedest to find massive voter fraud for a couple of years now, and they simply have not found it,” Honig said. “It’s just not there to be found.”

From his so-called “university” to his since-shuttered charity, Trump has a long history of soliciting money in ways that prosecutors and customers have found to be dishonest. After the New York attorney general’s office shut down the Trump Foundation in 2018, the president paid millions to settle claims he used the non-profit as his personal piggy bank. Trump University went belly up in 2010, under the weight of class action lawsuits by former students and AG probes. An active civil case in the Southern District of New York accuses the Trump Organization and family of participating in a Pyramid scheme.

That federal lawsuit continues through Trump’s lame-duck period and inevitably will extend into his post-presidency, when staggering debts, well above those his campaign accrued, are expected to become due and owing.

[Screengrab from the Archive of Political Emails]