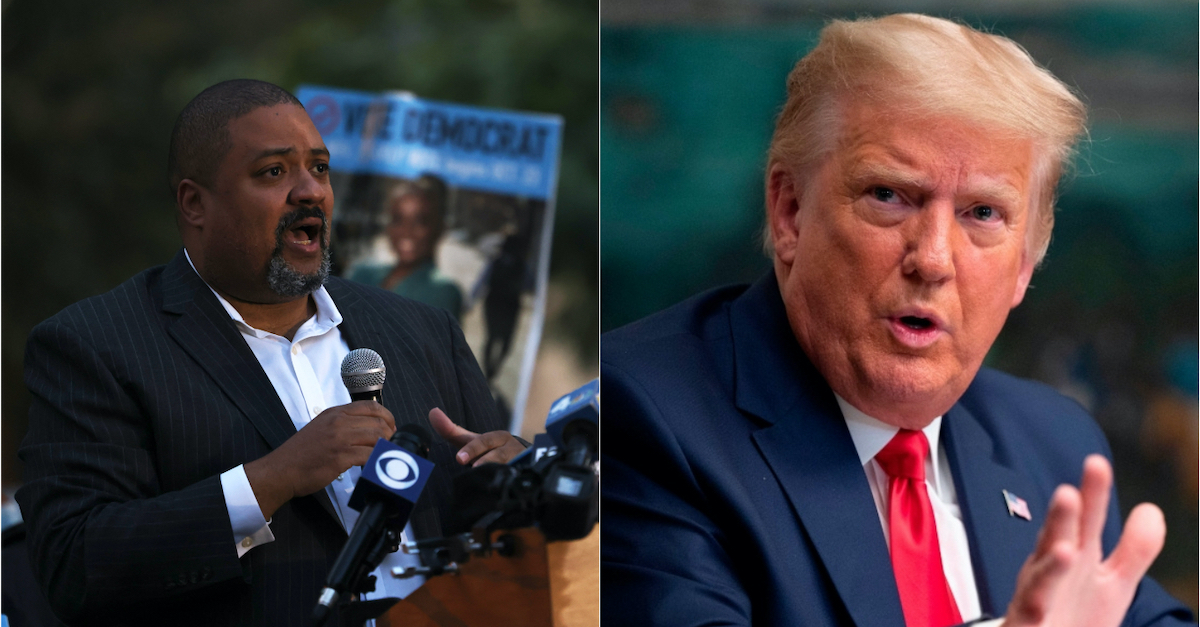 A little more than a month after two of his top prosecutors resigned in protest, Manhattan District Attorney Alvin Bragg (D) broke his silence on Thursday to insist that his criminal investigation into the Trump Organization continues. He also vowed to issue a public statement at the time of the probe’s conclusion.

“In recent weeks, the Manhattan District Attorney’s Office has been repeatedly asked whether our investigation concerning former President Donald J. Trump, the Trump Organization, and its leadership is continuing,” Bragg’s statement began.

“No Magic at All to All Previously Reported Dates”

Conspicuously unmentioned in his statement, Bragg’s former top assistants leading that investigation—Mark Pomerantz and Carey Dunne—abruptly resigned in February. The New York Times’s initial report suggested that they were frustrated because they wanted to pursue charges against former President Trump, and Bragg vetoed that decision. The Times published Pomerantz’s resignation letter the next month appeared to confirm that.

“The team that has been investigating Mr. Trump harbors no doubt about whether he committed crimes—he did,” Pomerantz reportedly wrote, adding that he was confident that prosecutors could prove that “beyond a reasonable doubt” and asserting that failing to do so would be a “grave failure of justice.”

According to Pomerantz’s letter, Bragg’s predecessor Cyrus Vance (D) believed the “facts warranted prosecution” of Trump. Before his term ended, Vance secured the indictment of the Trump Organization and its former chief financial officer Allen Weisselberg last July. New York Attorney General Letitia James (D), who has been investigating Trump, his family and his business in a civil probe, revealed her cooperation with Vance that day. Pomerantz and Dunne surprised many by resigning shortly after a judge ordered Trump to sit for a deposition—and after Trump’s longtime accounting firm Mazars stopped vouching for the accuracy of his tax records.

Just as Trump appeared to be in his greatest legal peril, Bragg’s criminal investigation seemed to unravel. Two of the district attorney’s leaders noisily left just weeks before April, the month the special grand jury investigating him would see its term expire.

Bragg argued he was not bound by that clock.

“As anyone who has worked on criminal cases in New York knows, New York County has grand juries sitting all the time,” he wrote. “There is no magic at all to any previously reported dates. The team working on this investigation is comprised of dedicated, experienced career prosecutors. They are going through documents, interviewing witnesses, and exploring evidence not previously explored.”

The statement did not explain why Bragg decided to speak publicly at this time, but the Democratic district attorney has faced stinging criticism about his reported reluctance to prosecute Trump in a deep-blue Manhattan Island.

“I Pledge This Office Will Publicly State the Conclusion”

Bragg said that his Chief of the Investigation Division Susan Hoffinger now leads the Trump investigation, and he touted his own background as a former state and federal prosecutor in the Southern District of New York.

“I went wherever the facts took me, prosecuting two mayors, a city council member, an FBI agent, a former Senate Majority Leader, a District Attorney, and business executives,” Bragg said, adding that he also served as chief deputy inside the attorney general’s office when it shut down the Trump Foundation.

Grand jury matters are secret as a matter of law, and Bragg said that he cannot satisfy public appetite for more disclosure.

“Doing so can create problems for cases and investigations, the individuals involved, and the criminal justice system,” he said. “It can affect witness testimony or even lead to witness tampering. Unauthorized public disclosures also potentially can affect a defendant’s right to a fair trial.”

“While the law constrains me from commenting further at this time, I pledge that the Office will publicly state the conclusion of our investigation – whether we conclude our work without bringing charges, or move forward with an indictment,” he added.

When reports emerged indicating that Bragg was reluctant to move forward with the Trump case, some legal experts noted that convicting him of tax fraud would not be easy. In the civil probe, AG James alleged that Trump may have used “fraudulent or misleading” asset valuations on six properties to obtain tax benefits, and his former accounting firm no longer stands by them. Some of the alleged discrepancies appear startling: The former president inflated the size of his Trump Tower triplex by three times and valued rent-stabilized units more than 66-fold, the attorney general has said.

Establishing criminal intent, however, could prove trickier: Weisselberg is known to be staunchly loyal to the former president, and he has fought to dismiss the case rather than cooperate with the government. Trump famously does not send text messages or emails, leaving little in the way of a paper trail in a case that would largely hinge upon criminal intent. That would leave Trump’s former fixer Michael Cohen as the key witness against his former boss, and a seasoned defense attorney would likely bring up Cohen’s conviction for lying under oath during cross examination, among others.

Perhaps nodding to such critics, Bragg said that prosecutors cannot only bring cases that are “slam dunks.”

“To the contrary, every case must be brought for the right reason – namely that justice demands it,” he wrote.