‘She Was Held as an Outsider’: Mary Trump’s Lawyers Tell Judge Ex-President and His Sister Covered Up ‘Fraud’ 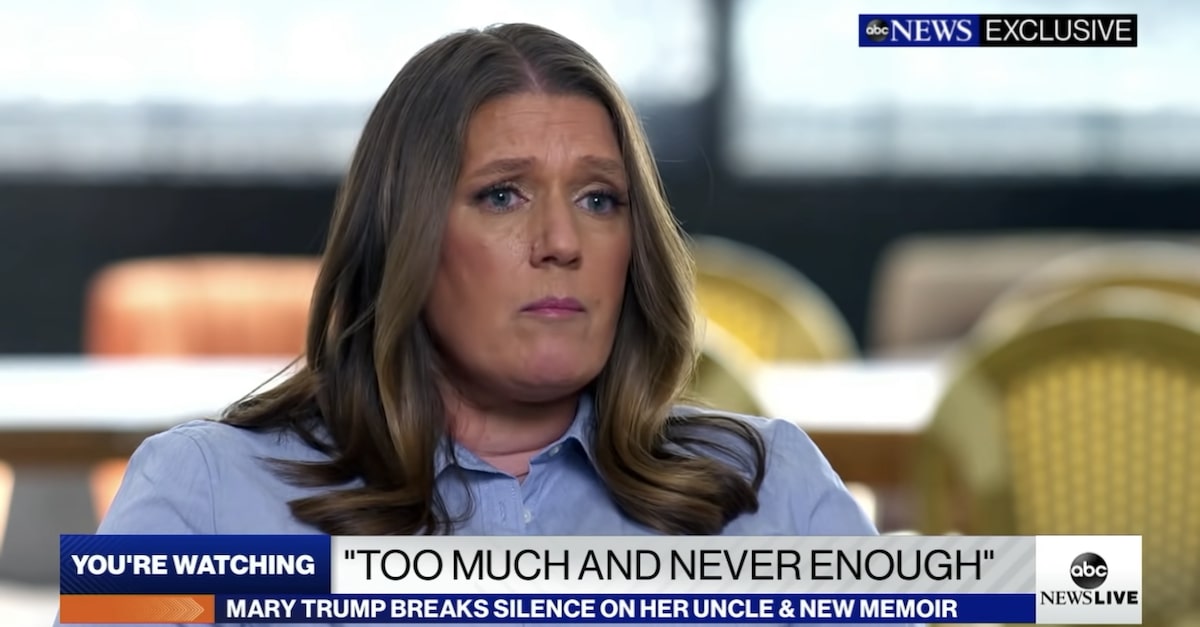 Screenshot of Mary Trump’s interview with ABC’s George Stephanopoulos on her book “Too Much and Never Enough.”

Attorneys for former President Donald Trump and his niece Mary Trump clashed in court on Tuesday morning, for their first face-off over litigation related to the fallout of the latter’s tell-all memoir “Too Much and Never Enough.”

During the roughly two-hour hearing, counsel for Mary Trump’s relatives—including the former president and his sister Maryanne Trump Barry, a retired federal judge—struggled to persuade a New York judge to throw out a lawsuit claiming they “fleeced her of tens of millions of dollars or more.”

“Lying Does Not Equate to Fraud”

A clinical psychologist, Mary Trump employs her professional training to depict her uncle Donald as a narcissist whose family has grown tired of his delusions. The book also provides the backstory to the groundbreaking New York Times investigation alleging the 45th president’s vast fortune derives from inheritance fraud. Mary Trump supplied the financial records for the Times exposé and says that she learned through that process that her uncle and aunt cheated her out of what she was owed from the family patriarch: Fred Trump Sr.

That claim forms the basis of Mary Trump’s lawsuit filed by her attorney Roberta Kaplan on Sept. 24, 2020.

“Mary’s father, and their brother, Fred Trump Jr., died in 1981 when Mary was just sixteen years old,” the 52-page lawsuit alleged. “Upon his death, Mary inherited valuable minority interests in the family business. Donald, Maryanne, and Robert committed to watch over her interests as fiduciaries. They lied. Rather than protect Mary’s interests, they designed and carried out a complex scheme to siphon funds away from her interests, conceal their grift, and deceive her about the true value of what she had inherited.

Barry’s attorney Gary Freidman claimed that the lawsuit must be dismissed because the statute of limitations lapsed since the decades-old inheritance battle. Though Mary Trump has claimed that the Times reporting informed her she had been defrauded, Freidman argued that she was a “sophisticated” actor represented by “competent” counsel.

New York Supreme Court Justice Robert R. Reed noted that Mary Trump tells it quite differently, arguing that her lawyer was “compromised.” The complaint describes her then-lawyer as an “old hand in Trumpworld.”

Trying to use her book against her, Freidman said that Mary Trump wrote about sensing that she was being lied to during the settlement, but Justice Reed countered that this in and of itself would not suggest proof that she was on notice.

“Lying doesn’t equate to fraud,” Reed noted, adding that it is only “one element of fraud.”

Freidman also argued that Mary Trump signed a broad general release, but the judge noted that multiple releases were signed, which the plaintiffs cite as evidence that the releases were not “general.”

The former president’s lawyer James Kiley denigrated the investigative journalism of the Times throughout arguments, describing the reporting as a plain reading of the files provided to them.

“The New York Times was like the Rosetta Stone,” Kiley said, mocking the plaintiff’s argument. “This was the thing that enlightened her.”

But Kiley claimed: “Nothing there was a revelation,” arguing that the Times‘ reporting showed Mary Trump’s own lack of “due diligence.”

Mary Trump’s lawyer John Quinn described the 37-page, Pulitzer Prize-winning Times investigation as far more sophisticated than Kiley depicted it. Part of it unraveled an entity known as All County Building Supply & Maintenance, described in the complaint as a “sham corporation.”

“This was the cover-up, and by definition, the cover-up does not give notice of the fraud that it’s covering up,” Quinn said.

The Times dedicated 18 months with an “army of reporters,” describing the scheme as “numbingly complex,” Quinn added.

Claiming his client’s aunt and uncle kept her in the dark, Quinn said of Mary Trump: “She was held as an outsider in this family.”

Firing back roughly one year later in a countersuit, the former president accused his niece and Times investigative journalists of engaging in an “insidious plot to obtain confidential and highly-sensitive records which they exploited for their own benefit and utilized as a means of falsely legitimizing their publicized works.”

“The defendants’ actions were motivated by a personal vendetta and their desire to gain fame, notoriety, acclaim and a financial windfall and were further intended to advance their political agenda,” Donald Trump’s lawyer Alina Habba wrote.

Mary Trump’s legal team viewed the counterclaims as a vintage example of her uncle’s history of litigation “gamesmanship.”

“Defendant Donald Trump’s most recent gambit makes clear that in the absence of progress in this case, he will try to use the court system to contort the issues, obstruct this litigation, punish Mary, and engage in precisely the kind of gamesmanship we warned of in our prior letter,” Roberta Kaplan wrote on Sept. 22, 2021.

Mary Trump’s attorney Ted Boutrous, a prominent First Amendment lawyer who represented her in a prior lawsuit as well as CNN’s Jim Acosta, described that countersuit as “frivolous” and “doomed.”