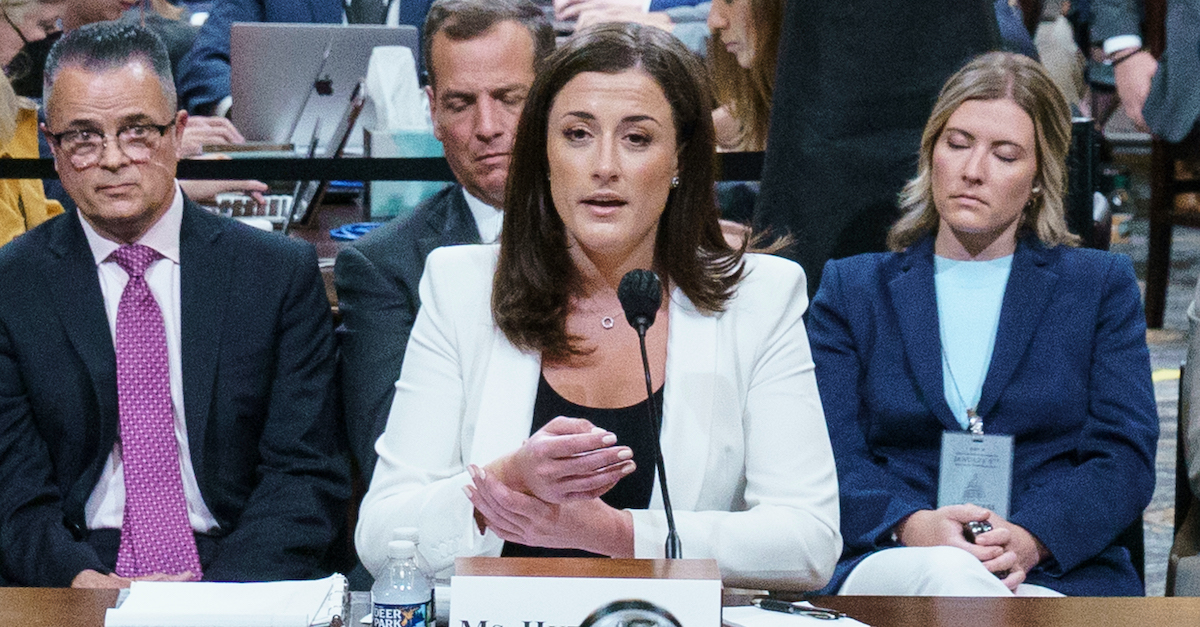 Cassidy Hutchinson, a top former aide to Trump White House Chief of Staff Mark Meadows, describes the alleged actions of former President Donald Trump as she testifies during the sixth hearing held by the Select Committee to Investigate the January 6th Attack on the U.S. Capitol on June 28, 2022 in the Cannon House Office Building in Washington, D.C.

As the top aide for former President Donald Trump’s ex-chief of staff delivered a blow-by-blow account Tuesday of her version of conversations with others in the then-president’s inner circle in the lead-up to Jan. 6, 2021, the official Twitter account for Republicans on the House Judiciary Committee launched a partially specious counterattack.

“It’s literally all hearsay evidence,” tweeted @JudiciaryGOP, a committee whose Republican members are led by Trump loyalist Rep. Jim Jordan of Ohio. “What a joke.”

It’s literally all hearsay evidence. What a joke.

Jordan refused earlier this year to cooperate with the Jan. 6 Committee, and the House Judiciary Republicans whom he leads largely misstated and oversimplified the Federal Rules of Evidence — the rules with which the lawmakers overseeing the courts should be familiar.

Hearsay isn’t the easiest legal concept to describe or understand. Technically, it’s an out-of-court statement offered as proof that the matter asserted is true (as opposed to the mere existence of the statement itself). The core issue is trustworthiness: an in-court statement relevant to litigation and made by someone who is speaking under oath is considered to be more trustworthy than a statement uttered outside of court and thus not subject to the pains and penalties of perjury. Consequently, the “hearsay rule” is one that generally excludes legally untrustworthy statements — but not all out-of-court statements — from being offered as evidence.

“Hearsay rules are meant to ferret out evidence that is more reliable,” attorney Michael Harwin, a former federal prosecutor now in private practice, explained to Law&Crime.

Under federal hearsay rules, the most reliable statements are normally those made in court and after someone has been sworn to testify truthfully under oath. Testimony that refers to statements that were not made under oath could be considered less reliable, Harwin explained.

Accordingly, there are exemptions (things that the rules say are simply “not hearsay“) and exceptions (other carve-outs) in the federal rules of evidence, Harwin told Law&Crime.  Regardless of the moniker applied, the courts who analyze these issues day-in and day-out under the aforementioned rules generally look for an indicia of trustworthiness in an out-of-court statement in order for a fact-finder (a judge or a jury) to consider it.

Examples of statements that are considered inherently trustworthy are present-sense impressions (“describing or explaining an event or condition, made while or immediately after the declarant perceived it”), an excited utterance (a “statement relating to a startling event or condition, made while the declarant was under the stress of excitement that it caused”), and a “then-existing mental, emotional, or physical condition,” which has an even broader definition:

Other types of statements that escape the general ban on hearsay are statements made for medical treatment (because the courts presume that injured persons won’t lie to their doctors; lying to a doctor would stymie treatment and result in additional suffering or harms) and certain official or regularly kept records.

The exceptions are many.  As we said, it’s complicated.

The first issue with the GOP’s tweet is its wholesale approach to the testimony:  “it’s literally all hearsay.”  That’s not entirely accurate.  While some of the testimony almost surely would be considered hearsay in a court of law, some of it would not, and the distinctions are far more complicated than the all-or-nothing assertion made by the GOP’s tweet.

The second issue with the tweet is that Cassidy Hutchinson wasn’t testifying in a court of law.  Therefore, the rules of evidence do not apply.  Evidence rules apply to criminal and civil lawsuits tried before a judge and sometimes a jury.  They do not apply to congressional hearings, which are fact-finding missions at their core.  So, the hearsay assertion as applied to the Committee hearings is ultimately irrelevant.  Trials are different.  Trials assign legal blame in cases and controversies brought before a judge and assess punishments or damages.  No legal jeopardy results directly from from a congressional hearing.

That distinction is important.  There’s no defendant in a congressional hearing who might be ordered to serve time in jail or pay money as a penalty for tortious conduct or a breach of contract.  Therefore, one of the biggest exemptions to the hearsay rule doesn’t even apply here.  That exemption applies to statements uttered by a party or an opponent in a court case.  Litigation is adversarial, and parties who are named plaintiffs (in civil cases) and named defendants (in criminal and civil cases) cannot use the hearsay rules to prevent their own out-of-court statements from being testified to by a witness.  Think about it:  police officers testify every day in America about things criminal defendants said to them.  Criminal defendants cannot use the hearsay rule to stymie such testimony because the statements uttered are those of a party (themselves) and an opponent (also themselves).  Because this is a congressional hearing with no officially named parties or opponents, it’s very difficult to parse out what parts of Hutchinson’s testimony the hearsay rules might exclude or what the hearsay rules might include.

Another exemption also creates vexing possibilities as to Hutchinson’s testimony:  prior out-of-court statements by a witness are exempt from the definition of hearsay.  If Witness A testifies and is attacked as an alleged liar, then Witness B can be allowed to testify in attempt to clear the air about things Witness A said outside court.  It’s unknown why the Jan. 6 Committee called Hutchinson before calling some of the direct witnesses to some of the incidents Hutchinson discussed.  Calling Hutchinson first would probably be problematic for prosecutors in a hypothetical criminal trial based on the same events.  If the case was proceeding in a court of law, the evidence laws would require that some of the more direct eyewitnesses mentioned by Hutchinson would probably have to be strategically called to testify first.

But that, of course, presumes those witnesses are “available” under yet another hearsay exception.  An example of one type of unavailable witness is someone who “refuses to testify about the subject matter despite a court order to do so.”  Though the Jan. 6 Committee isn’t a court, we do know that many witnesses have simply refused to appear.  Statements made by such witnesses may, when washed through the remaining Rules of Evidence, come into a trial if they meet other criteria; one of those criteria is contained in a so-called “residual exception” — which requires that the statement be “supported by sufficient guarantees of trustworthiness” in order to be admitted as evidence even if it is otherwise considered hearsay.

Hutchinson testified Tuesday that on Jan. 2, 2021, as she and the former mayor of New York were walking together after a meeting between Giuliani and Meadows. Giuliani asked if she was “excited” about Jan. 6. When she asked what he meant, Giuliani said that they were “going to the Capitol” and that it would be a “big day,” adding that Trump would be there and he would “look powerful.”

“Talk to the chief about it,” Giuliani allegedly told Hutchinson four days before Jan. 6, apparently referring to Meadows. “He knows about it.”

Hutchinson later told Meadows about what she described as her “interesting” conversation with Giuliani.

Meadows, Hutchinson recalled, was sitting on the couch in his office, scrolling through his phone. He didn’t look up, but he did speak.

“There’s a lot going on, Cass,” Meadows allegedly said. “But I don’t know. Things might get real, real bad on Jan. 6.”

If Hutchinson was testifying at trial, the Meadows statement might be considered hearsay if it was being offered as proof of a fact. But it’s arguable whether a prediction that things “might get real, real bad” is even that; it’s also possible that the Meadows statement could be included in the evidence under under the “state of mind” exception to the hearsay rule.  That exception reads as follows:

“If what you’re testifying to is identifying what someone else said, it can be hearsay, but it doesn’t necessarily have to be hearsay,” Harwin told Law&Crime.

In a court of law, some of Hutchinson’s most stunning (and reportedly to-be-disputed) testimony might be considered excludable hearsay. Her testimony about Trump allegedly trying to grab the steering wheel of the armored vehicle driving him away from his so-called “Stop the Steal” rally — where he encouraged his supporters to march to the Capitol and pledged to join them, even though he ultimately didn’t — recounted events relayed to her by then-Deputy Chief of Staff Tony Ornato, who himself was allegedly telling Secret Service agent Robert Engel’s version of what happened in the car.

“I’m the f’ing president,” Trump reportedly yelled while in the car. “Take me up to the Capitol now!”

Hutchinson said that, according to Ornato, Trump then “reached up toward the front of the vehicle to grab at the steering wheel.”

Engel, then the head of Trump’s security detail, then allegedly grabbed Trump’s hand and told him to take his hand off the wheel. Trump then allegedly turned on Engel himself, using his free hand to “lunge” toward the agent, Hutchinson said.

This line of testimony could potentially be considered inadmissible hearsay, if Hutchinson was testifying at trial and that testimony was being offered in support of the alleged fact of Trump trying to grab the steering wheel. Ornato didn’t witness the encounter himself, and he wasn’t under oath when he allegedly relayed the story to Hutchinson.

However, as Harwin explained, if Ornato himself was being charged with a crime or was a party to a lawsuit, his statement might not be considered hearsay at all, and instead would be deemed an admission of a party-opponent (and, therefore admissible).

But Hutchinson could testify about other things she saw and observed.

“Just because you see something and you testify about your own personal observation, that’s not necessarily hearsay,” Harwin said.

Hutchinson described Engel as looking “somewhat discombobulated, a little lost” when she encountered him and Ornato, and noted that he did not say or do anything to contradict Ornato’s story as he relayed it to Hutchinson at that time.  Her own observations about the matter would likely not be considered hearsay.

As we said, it’s complicated, and the House Judiciary GOP’s broad assertion on the subject failed to capture this nuance.