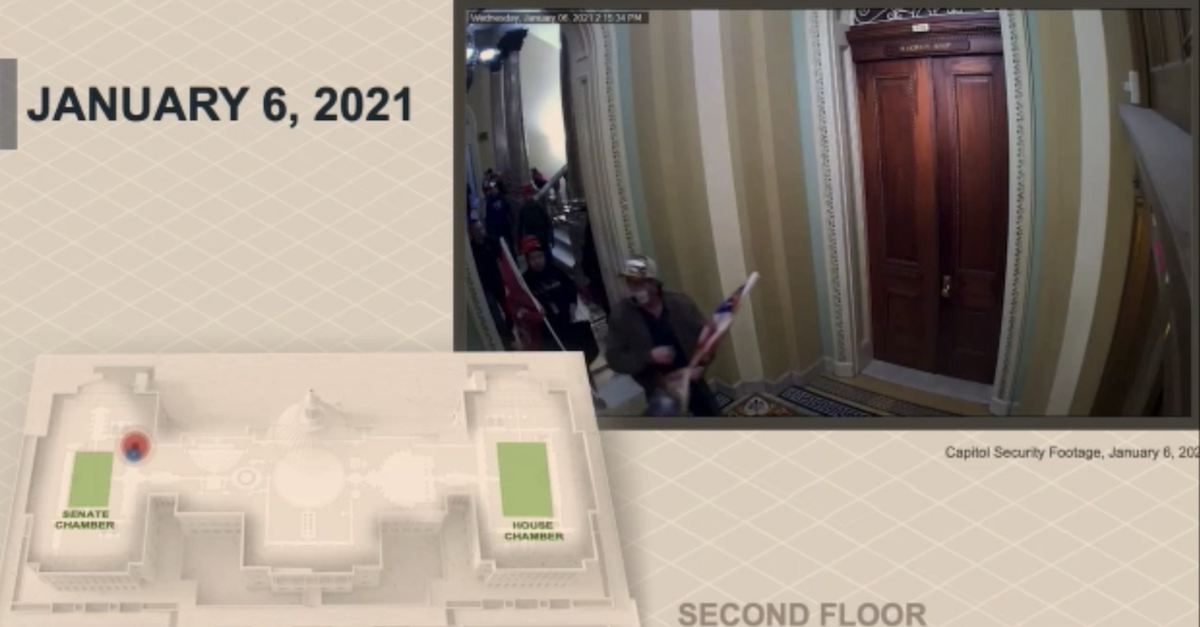 This image of U.S. Capitol insurrectionist diverted by Officer Eugene Goodman can be seen in this security footage shown for the first time during former President Trump’s impeachment trial.

Through hours of opening statements on Wednesday, House impeachment managers sounded a consistent theme that the U.S. Capitol insurrection did not arise spontaneously. The Democrats meticulously showed how former President Donald Trump primed his supporters to believe the election would be stolen some six months before the contest happened, delegitimized the race as it turned against him, and resorted to more extreme measures with every defeat in legal, bureaucratic and extrajudicial channels.

The crescendo of their narration capped off in never-before-seen security footage of rioters overwhelming law enforcement inside the Capitol and police radios of the assaults.

“What you are about to hear has not been made public before,” Stacey Plaskett, an impeachment manager and Delegate to the House from the Virgin Islands, said before the video started to roll.

And with it, came a cacophony of voices.

Later in the video, another yells: “They’re throwing metal poles at us.”

"What you are about to hear has not been made public before."

One voice shouts: "They're throwing metal poles at us." pic.twitter.com/jROkrIXz4Q

Among the new videos that became public on Wednesday were assaults on law enforcement and rioters pursuing Officer Eugene Goodman, who heroically led the mob to chase him to divert them from Congress members.

In another video, narrated by California Rep. Eric Swalwell, now-Senate Majority Leader Chuck Schumer experienced what the impeachment manager called a “near miss” with the mob.

As Rep. Jamie Raskin, a Maryland Democrat serving as the House’s lead impeachment manager, summarized of Trump unleashing the mob: “He told them to ‘Fight like hell,’ and they brought us hell that day.”

“The president used this speech as a call to arms,” Neguse said. “It was not rhetorical.”

The second video in this clip, which shows body cam footage, is horrific. https://t.co/P2UNo6mSww

Trump’s defenders have been quick to point out that the 45th president made passing reference to his supporters “peacefully and patriotically” making their voices heard, but another impeachment manager, Rep. Madeleine Dean (D-Penn.), noted that the fleeting remark paled in comparison to the overall message.

But the consistent theme of the day was the siege took root long before Trump delivered that speech on the Ellipse.

Each House manager took turns showing how Trump tried to stop the count when the mail-in ballots began to favor his Democratic rival, went to the courts to overturn the results, and intimidated officials certified the results, ultimately resulting in what they allege to be one final and premeditated effort to remain in power through mob violence.

Multiple Democratic managers—California Rep. Eric Swalwell and Plaskett—called attention to the role of the group Women for America First and its leader Kylie Jane Kremer in organizing the event, which she promoted with a tweet on Dec. 19, 2020: “The calvarly is coming, Mr. President!”

The new footage adds to a veritable library available on social media, major news networks and other corners of the internet.

The U.S. has public has seen the agonizing footage of Metropolitan Police Department Officer Daniel Hodges howling in pain as a mob crushed him inside the doors of the Capitol. The nation saw the shooting of pro-Trump rioter Ashli Babbitt as throngs of people tried to break through the barricaded doors of the Speaker’s Lobby to pursue the elected officials behind it. The live-stream videos of the siege have gone viral, been screenshot in countless criminal complaints, and even been indexed by enterprising investigative journalists.

Opening statements were made possible after six Republicans joined a unanimous Democratic caucus in finding that the Senate has jurisdiction to try a former president, a right and ability enshrined in both the Constitution and precedent. That was true for President Ulysses S. Grant’s war secretary William Belknap, perhaps the most frequently cited example of a U.S. official tried in the Senate after leaving office.

Rep. Raskin found nothing in law or precedent to support the creation of what he called a “January exception.” The Senators agreed by a 56-44 margin, paving the way for the trial to officially begin.