Trump Supporter Who Told Cops ‘We Back the Blue’ at Capitol Blamed Cops for His Actions During Interview: FBI 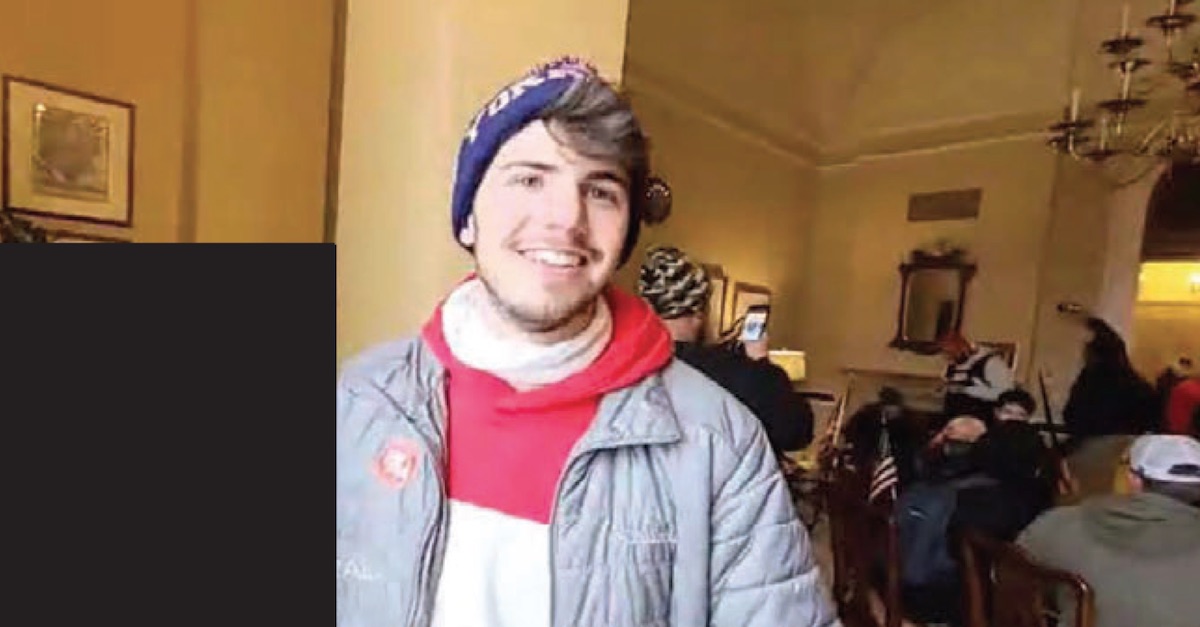 A Donald Trump-supporting man and self-described “patriot” from the Peach State was arrested on Tuesday in the Northern District of Georgia after being identified by the Federal Bureau of Investigation as one of many individuals who unlawfully entered the Capitol on Jan. 6. Benjamin Torre, 23, told cops “we back the blue” while at the Capitol but also threw cops under the bus by saying they “helped us in Capitol,” the FBI said the defendant admitted during an interview.

Torre, who is from Dawsonville, allegedly made these admissions during an interview that his parents attended.

“On January 21, 2021, FBI agents interviewed TORRE at his home in Dawsonville, Georgia. TORRE’s parents were present for the interview. During the interview, TORRE admitted that he entered the U.S. Capitol building. TORRE stated that he drove to Washington, D.C., with his family, including his parents, on January 4, 2021,” the complaint said. “According to TORRE, he did not go to the rally as part of any group, but because he is a ‘patriot.’ TORRE stated that he attended the ‘Stop the Steal’ rally, during which he heard President Trump tell the crowd to ‘peacefully march to the Capitol.'”

The complaint included images, like the one above, showing Torre inside the Capitol. There are other images apparently showing him on a boat with a large Trump flag, calling to mind the raucous Boaters for Trump parades of last year.

According to the FBI, Torre styled himself as a backer of the blue while also pointing a finger at the blue for allowing to him commit what the government now alleges were federal crimes:

TORRE advised the agents that the officers were “completely fine” with all of the “protestors” in front of the Capitol.

TORRE reported that the officers “helped us in Capitol,” in that they did not shout or try to stop them from coming into the Capitol. TORRE further stated that he nodded at the officers, and continued into the building.

TORRE stated that at one point he saw a line of officers and he spoke to them and said, “We are here in support of you and we back the blue.” TORRE reiterated that the officers did not “stop, hinder, or do anything to keep people from inside the Capitol.” TORRE then explained that when he left the building, he did so through the same broken window; when he was already half- way through the window, an officer instructed TORRE and another person to exit the building through a doorway instead of through the broken window so they would not get injured.

TORRE admitted that he had told some people that he was at the Capitol for the events of January 6, 2021 – although he did not tell them “the full story.” TORRE said he was telling those people that what happened “was not what you see on the news. TikTok makes it look really bad. Instagram makes it look really bad.” TORRE also confirmed that he was still working for the same employer referenced by Person 1.

The defendant said he did not damage property or commit violent acts but admitted he was inside the Capitol, per the FBI. He said he was caught up in the moment, as the FBI put it, thinking he would tell his kids all about Jan. 6 some day.

Torre faces charges for knowingly entering or remaining in any restricted building or grounds without lawful authority, and for violent entry and disorderly conduct on Capitol grounds.

The court docket does not currently show an attorney of record for Torre, but DOJ records indicate the defendant made an initial appearance on Tuesday afternoon.