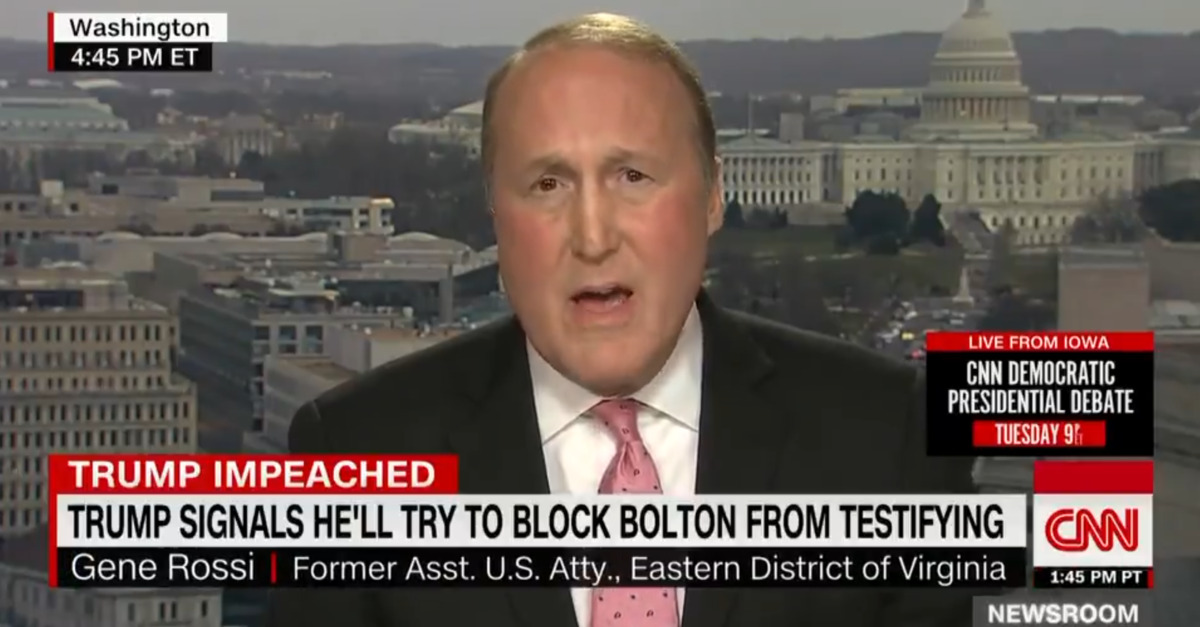 Speaker of the House Nancy Pelosi has summarily folded. After some pressure from the media and congressional Republicans, House Democratic leadership say they plan to transmit two articles of impeachment to the U.S. Senate as soon as early next week. The Senate’s trial of President Donald Trump could then begin soon as this coming Wednesday–but all indications suggest that landmark trial will be conducted without a single witness.

The transmittal of those two historic articles was delayed after Pelosi saw former Watergate whistleblower John Dean suggest such a brief hiatus on television, according to media reports. The plan, per Democrats, was to to hold back the articles until Senate Republicans agreed to conduct a fair trial. That pause has apparently come to an end without any promises from Senate Majority Leader Mitch McConnell as to the framework or fairness that will occur in the upper chamber.

“I have asked Judiciary Committee Chairman Jerry Nadler to be prepared to bring to the Floor next week a resolution to appoint managers and transmit articles of impeachment to the Senate,” Pelosi said in a letter to her colleagues released Friday.

And, now, all eyes are on McConnell.

“According to the Washington Post, the Senate has conducted 15 impeachment trials in its 231-year history and it’s heard witnesses in every single one,” Cabrera noted. “Is there any legal argument to not call witnesses?”

To which Rossi responded:

There’s no strong legal–you can always make a legal argument Ana–but in the President [Andrew] Johnson impeachment trial in the 1860s, they had 41 witnesses. Forty-one. And, I gotta tell you this, Ana, If they don’t have any witnesses in this impeachment trial, when the history books are written, it will be the biggest sham, the biggest con imposed on the American people in the history of our country.

“My goodness gracious, could you have maybe five witnesses?” Rossi asked out loud. “There’s probably 40 they could call. But could you at least give them five?”

“If they don’t have any witnesses in this impeachment trial, when the history books are written, it will be the biggest sham, the biggest con imposed on the American people in the history of our country.” — Gene Rossi, former US Attorney pic.twitter.com/t8ELqb3Hmp

Cabrera was referring to a Thursday analysis by Citizens for Responsibility and Ethics in Washington Director Noah Bookbinder attempting to shame McConnell for his decision-making over the format and content of the upcoming trial.

“If the current Senate takes seriously its constitutional responsibility to conduct an impeachment trial of Trump and the oath its members will take to ‘do impartial justice,’ then it must not depart from this unambiguous body of precedent,” Bookbinder argued. “It must hear from witnesses to the president’s misconduct.”

The opinion piece relayed some of the specific history:

Only 19 other individuals besides Trump have been impeached by the House of Representatives. The Senate completed a trial in 15 of those cases, and in every single one of them, it heard testimony from witnesses. Those cases include the only two prior instances in which a president was impeached. At the impeachment trial of Bill Clinton, the Senate permitted House managers to obtain trial depositions of three witnesses — Monica Lewinsky, Clinton confidant Vernon Jordan and White House aide Sidney Blumenthal — and the full Senate viewed video excerpts of those depositions.

But the avalanche of criticism simply isn’t sticking.

In fact, McConnell himself has recited the exact same notes before.