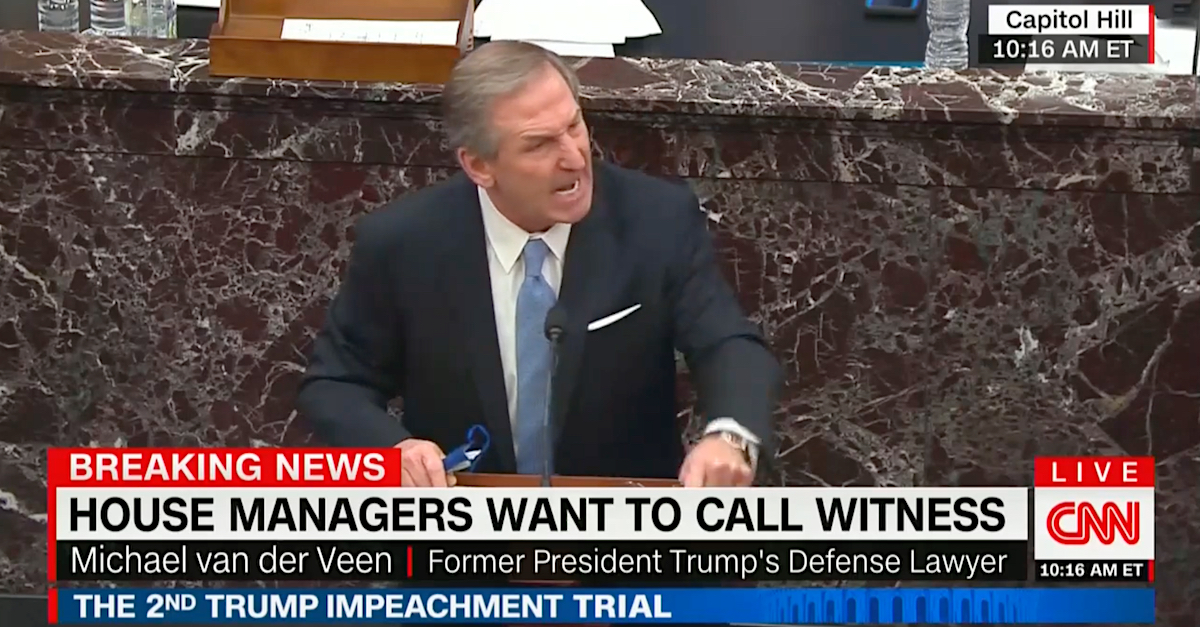 The attorney who represented former President Donald Trump during his second impeachment trial made waves after incorrectly pronouncing “Philadelphia,” despite being from the City of Brotherly Love. Now, he says, the mispronunciation was on purpose.

“That was intentional,” Michael van der Veen, a personal injury and criminal defense lawyer, said in a Thursday interview with The Legal Intelligencer. “I use ‘Philly-delphia’ regularly.”

The reason he used it during the historical and nationally televised tribunal, however, was to connote three separate things in service of his professed need to conduct “over 100 depositions,” in response to the Democratic Party’s quickly-rescinded vote to call witnesses. Some of those depositions, van der Veen said, would have included House Speaker Nancy Pelosi and Vice President Kamala Harris.

“I don’t know why you’re laughing,” van der Veen added, after being laughed at by multiple members of Congress.

“I haven’t laughed at any of you, and there’s nothing laughable here,” van der Veen said.

But the attorney insists there was no snafu; no nerves taking their toll on his loquacity.

“During the trial, I pronounced it that way to speak to the strong work ethic, thoroughness and toughness of the people in this great city,” he told the outlet. “I was intimating the same type of thoroughness would occur in the depositions at my office on Spruce Street.”

This isn’t the first time he’s made the claim that “Philly-delphia” was purposeful.

“Philly-delphia is something I say often, it’s actually a point of oration,” van der Veen told local CBS affiliate KYW-TV in mid-February. “Often I will pronounce something differently to make an effective point. Folks in my office or my kids will tell you I always talk about Philly-delphia.”

In the most recent interview, the impeachment winning attorney went on to express his fondness for what linguists call a blend word or lexical blend—often called a portmanteau.

“I often intertwine words to achieve an effect,” van der Veen mused. “Humorously, one of my longtime colleagues keeps a dictionary of words I blend, along with their meanings.”

The case of “Philly-delphia,” however, is not a genuine portmanteau but something more akin to a compound blend because a portmanteau or genuine lexical blend involves parts of two entirely separate words. Here, the word “Philly,” which is a clipped form of “Philadelphia,” in linguistics terms, is being used in full along with part of the city’s full name. (And, to be extremely technical, “Philly” is a final or back-clipped version of “Philadelphia.”)

To the attorney’s credit, the word isn’t without some precedent—though Philadelphians insist it is disgraceful and worthy of scorn.

“My nephew Scott on the beat,” he notes during the end of the last verse. “Illy Philly-delphia.”