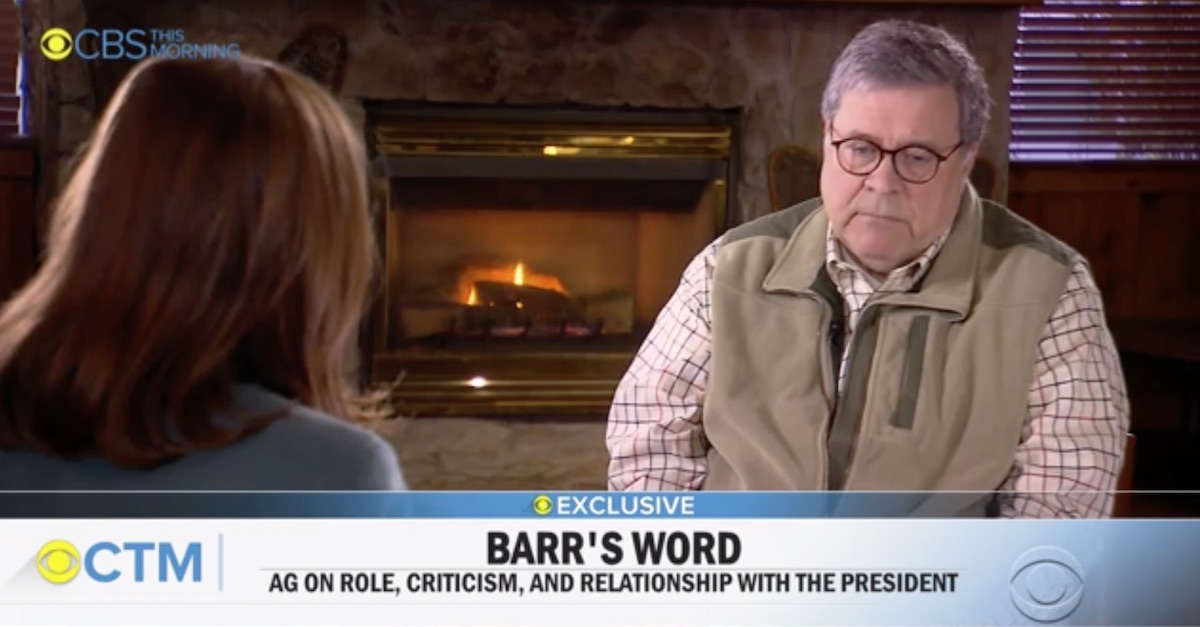 Attorney General William Barr, during a Q&A with CBS News while away in Alaska, commented that it’s people trying to take down President Donald Trump who are “shredding” American institutions, not the president.

Barr’s comments were published in full on Friday morning, and there were a few nuggets worth highlighting.

Barr was asked why he even wanted to take the Attorney General job, as opposed to remaining a private citizen. By now everyone knows that it was Barr who reached out the DOJ with an unsolicited memo arguing that the obstruction of justice case against Trump–which he believed Special Counsel Robert Mueller was considering–was fatally flawed. It took a few months, but Barr eventually ascended to the U.S. Attorney General position (for the second time in his career) and ended up being the person who a) handled Mueller’s Russia Report and b) determined that the evidence was “not sufficient” to accuse the president of the crime of obstruction of justice.

During the CBS interview, Barr explained that he is not a believer in the “Homeric idea” of immortality.

What Barr appears to be referring to is the ancient Greek idea of kleos, which basically means lasting glory/eternal fame that a hero has earned through great feats in life. This kleos would be expressed in the kind of song Barr alluded to (i.e. The Iliad and The Odyssey). (Contrast that with timé, a temporal honor that can be lost or gained. The spoils of war are a prime example.)

At any rate, Barr is saying he doesn’t care about kleos.

“I am at the end of my career,” he said. “Everyone dies and I am not, you know, I don’t believe in the Homeric idea that you know, immortality comes by, you know, having odes sung about you over the centuries, you know?”

2) Barr: No one cares about substance anymore, so I knew I’d be taking some heat

Barr said that he had no regrets about taking the job and described this time of American history as one of “intense partisan feeling.” Barr said he fully expected to lose “a lot of political capital” and didn’t care. In fact, he said, it was a reason he took the job.

“They only care about who it helps, who benefits, whether my side benefits or the other side benefits, everything is gauged by politics,” he said. “And as I say that’s antithetical to the way the department runs and any attorney general in this period is going to end up losing a lot of political capital and I realize that and that’s one of the reasons that I ultimately was persuaded that I should take it on because I think at my stage in life, it really doesn’t make any difference.”

“I think one of the ironies today is that people are saying that it’s President Trump that’s shredding our institutions. I really see no evidence of that,” Trump’s AG said. “From my perspective, the idea of resisting a democratically elected president and basically throwing everything at him and you know, really changing the norms on the grounds that we have to stop this president, that is where the shredding of our norms and our institutions is occurring.”