What’s the Deal with the Bizarre Temple-Like Structure on Jeffrey Epstein’s Private Island? 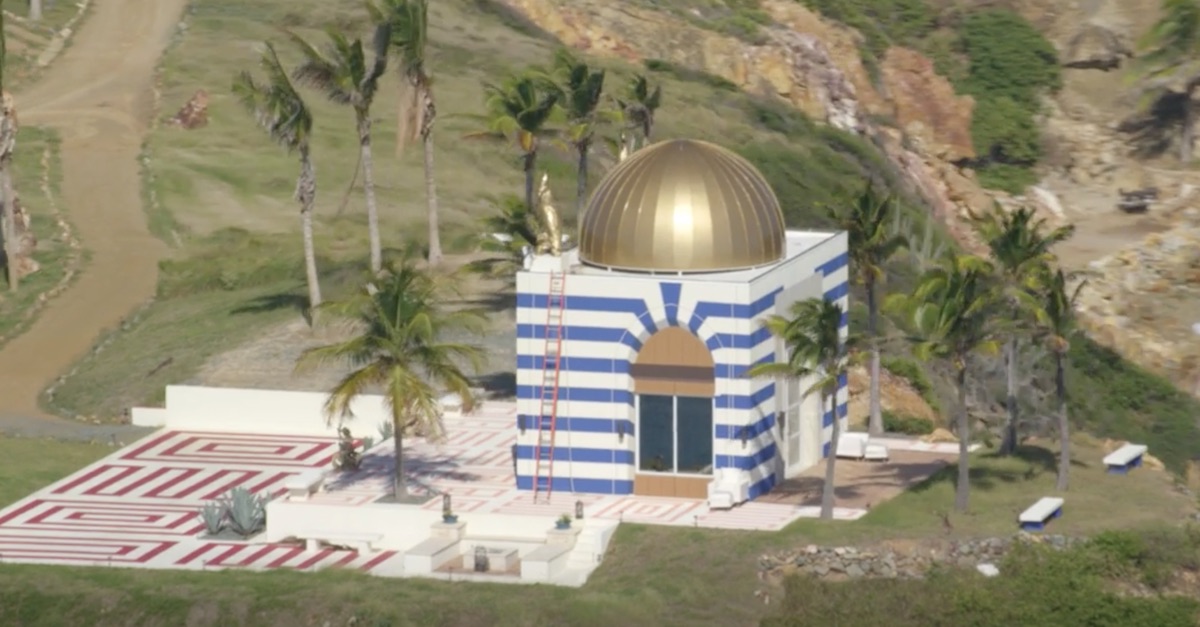 There have been varying explanations for the blue-striped “temple.” While the Associated Press account of it was benign, INSIDER’s story about it turned up something that is potentially nefarious.

The AP, citing workers, said that the building may have functioned as a glorified and grandiose music room, complete with a grand piano and “acoustic walls.” It’s been said that Epstein is classically trained. But the INSIDER account is raising eyebrows because an engineer and contractor named James Both commented that the wooden door of the structure appeared to be designed to keep people in, rather than keeping people out.

That and a second structure or apparent door down the hill have given rise to the thought that, perhaps, the temple served a very different purpose.

Could this secluded temple on 'Pedophile Island' be where Jeffrey Epstein and his guests 'abused underage victims'? https://t.co/9iu3Zrj6jg

Not sure we’ve scratched the surface yet on the sinister weirdness of the Epstein story https://t.co/fhbPPnmM9f pic.twitter.com/vLDLent7uJ

Here’s what Both said of the temple structure:

It’s styled like what you might see on a castle, with what appears to be a reinforcing lock bar across the face. What makes it peculiar is that if you wanted to keep people out, the bar would be placed inside the building, [but the] locking bar appears to be placed on the outside … as if it were intended to lock people in.

One angle of the second structure: 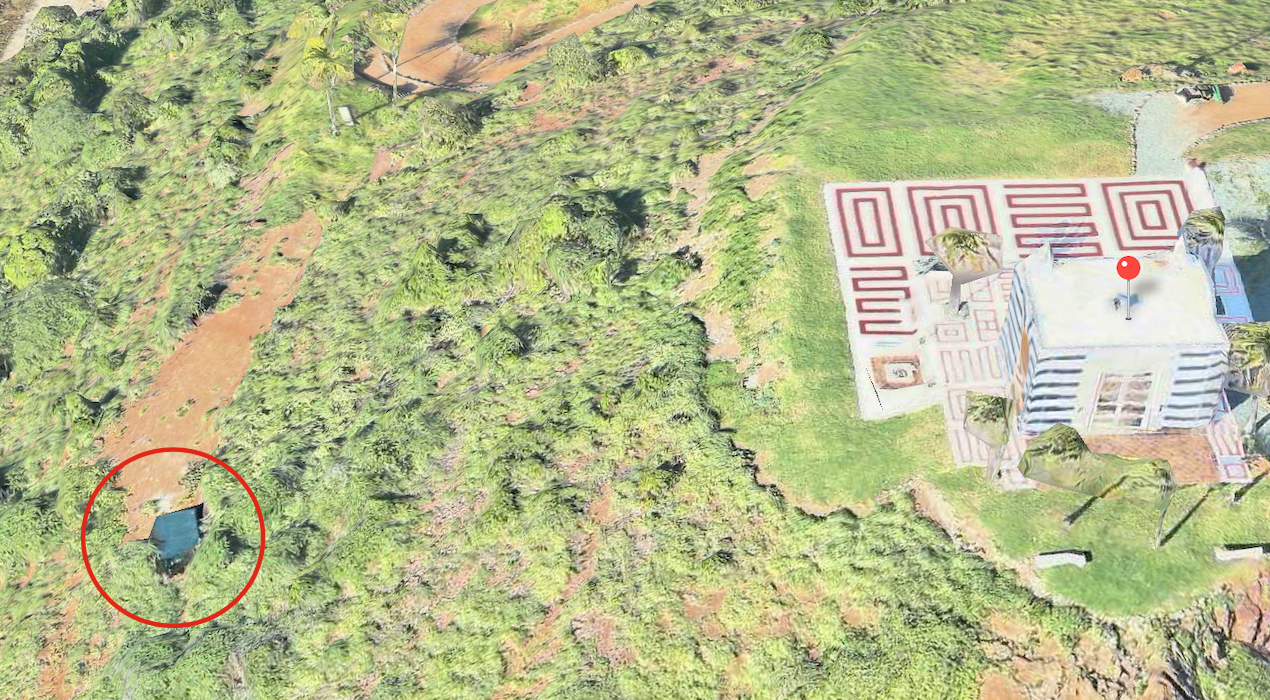 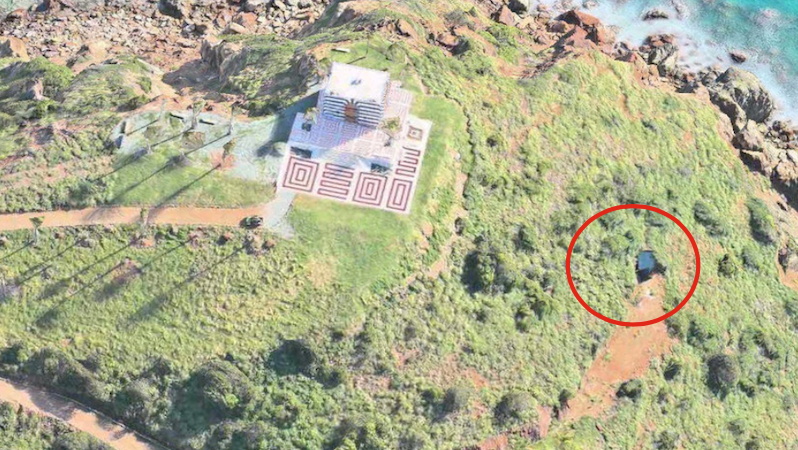 Mr. Both downplayed the purpose of the second structure, while also allowing the possibility that there could be something underneath the temple:

But Both, the Chicago contractor and engineer, said the smaller structure looked less like a secret entrance and more like a cistern for storing or treating water, a necessity for bringing plumbing to the more remote parts of the island. Another possibility, he added, was “a small caretaker’s shack which might include equipment for maintaining the property.”

As for a secret elevator and lair: “It is absolutely possible to install a dwelling and elevator underneath the structure.” The main caveat, however, was privacy: “If an elevator was built there, [there] would most likely be a record with the vendor who installed the elevator, as they typically require yearly maintenance and inspection. … A simple stairwell would be a better option if someone wanted to conceal their activities at the location.”

Interestingly, the temple appears to have been built between 2009 and 2013, which was after Epstein got a sweetheart deal that resulted in 13 months in a county jail in Florida.

After Epstein was arrested and charged with sex trafficking and conspiracy to commit sex trafficking, Southern District of New York prosecutors painted a picture of a man unrepentant. When authorities raided Epstein’s Upper East Side mansion, they said they found “at least hundreds–and perhaps thousands–of sexually suggestive photographs of fully-or partially nude females.”  Prosecutors said some of the images appeared to be of underage girls. “[A]t least one girl, who according to her counsel, was underage at the time the relevant photographs were taken,” they said. Prosecutors said Epstein locked away the photos in a safe.

Prosecutors noted that Epstein is a registered sex offender with a prior conviction, but that he has nonetheless “continued to maintain a vast trove of lewd photographs of young-looking women or girls in his Manhattan mansion.”

Inquiring minds, therefore, want to know what was going on Epstein’s secluded estate in the U.S. Virgin Islands, where he reportedly spent most of his time in recent years.

Jennifer Araoz, a now-32-year-old woman who alleged this week that Epstein raped her when she was 15, described a man who was a creepy and criminal aesthete.

Araoz said that when she was 14 she was recruited outside of her NYC school by a young woman to go to Epstein’s townhouse. That was in 2001. Araoz described strange things at Epstein’s residence–of which there are many–including a painting of a young naked woman that hung on the wall of Esptein’s “favorite room in the house.” In that room was a massage table. “When he first brought me up there, he was like, ‘You know, you remind me so much of this woman in the painting,’” she said.

By Araoz’s account, this was an example of Epstein linking select art works to sexual perversion. It makes one wonder whether the temple or other art works were linked in a similar way.

This hasn’t been the only account of Epstein using art for strange purposes. Consider R. Couri Hay’s comment in the New York Times after Epstein’s arrest. Hay is a PR employee who claimed to have visited Epstein at his Manhattan mansion earlier this year. Hay said that Epstein commissioned a mural, one showing him behind bars; this was after Epstein escaped potential life in prison in Florida for sexually abusing dozens of girls. The painting reportedly hangs on the second floor of the Upper East Side mansion.

The painting depicted “a photorealistic prison scene that included barbed wire, corrections officers and a guard station, with Mr. Epstein portrayed in the middle.”

Hay claimed that Epstein remarked, “That’s me, and I had this painted because there is always the possibility that could be me again.” Based on this account, it seems he commissioned it as a reminder — but of what, exactly, and why?

For more on this structure, see ABC News’ recent reporting.