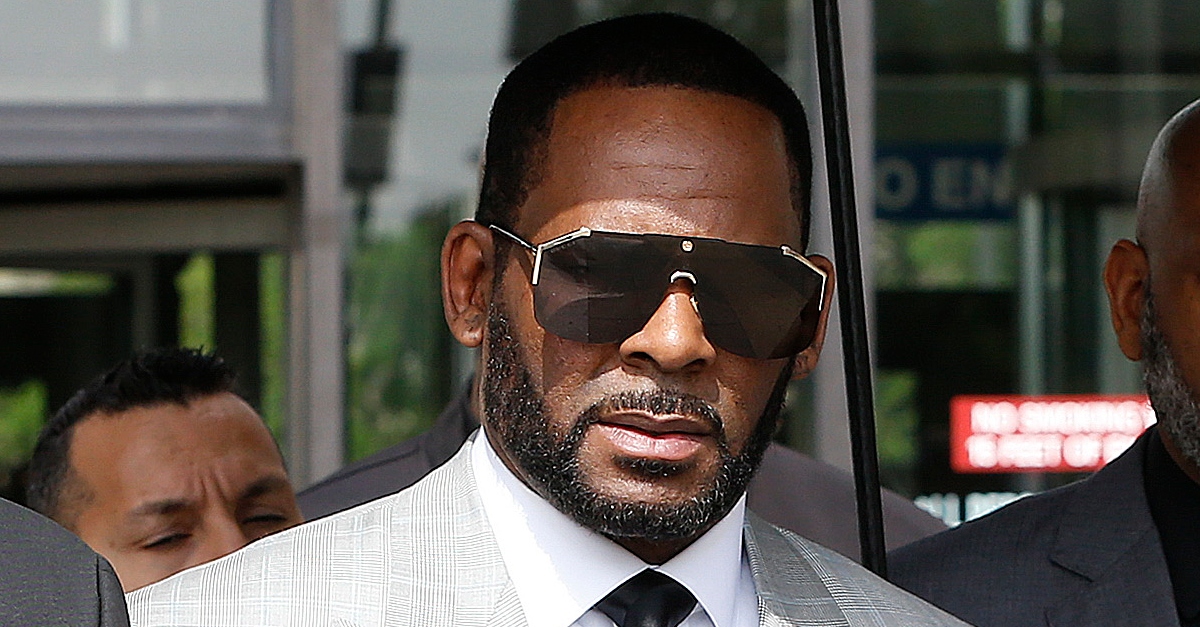 Two separate U.S. Attorney’s offices are charging singer R. Kelly in connection to his alleged abuse of women and girls. Prosecutors in the Eastern District of New York are going after Kelly for racketeering in the sexual exploitation of his victims. Meanwhile, investigators with the Northern District of Illinois hit him with child pornography charges and more.

Here are the key takeaways from these two indictments.

Kelly took victims across state lines to participate in illegal sexually activity, prosecutors said. Basically, he and his associates allegedly recruited them at his concerts, invited them backstage and maintained a relationship with them.

“As alleged, R. Kelly, together with employees and members of his entourage, engaged in a racketeering enterprise that preyed upon women and girls who attended his concerts so that the victims could be available to engage in illegal sexual activity with him at a moment’s notice,” said United States Attorney Richard P. Donoghue. “Today that comes to an end. This indictment makes clear that fame and power will not shield anyone from prosecution, particularly predators who victimize vulnerable members of our communities for their own sexual gratification.”

Each of the alleged victims is identified in the court documents as a Jane Doe. Allegations date back to 1999. The most recent involved Jane Doe 5 in 2018.

The New York indictment alleged the Kelly exhibited controlling behavior. He allegedly set down rules for the alleged victims:

Kelly sexually abused five underage girls, and recorded some of his actions on tape, said prosecutors with the Northern District of Illinois. Charges include conspiracy to receive child pornography, receiving child pornography, and enticement of a minor to engage in criminal sexual activity.

4. Two Co-Defendants. One of Them and Kelly Led Operation to Collect Lost Tapes, Prosecutors Say (Illinois)

Prosecutors are also going after two of Kelly’s former employees.

Federal records don’t name attorneys of record for these co-defendants.

Kelly possessed a collection of videos showing him abusing minors, prosecutors said. He and McDavid realized in about 2001 that some tapes were missing, and they worked together in finding the footage, pay out hush money, and getting people to lie to authorities, authorities said. From the indictment:

Between approximately 2001 and approximately 2009, KELLY, MCDAVID, Individual A, and others caused Individual B to be paid hundreds of thousands of dollars for obtaining and returning multiple videos that they knew depicted KELLY engaged in sexual contact and sexual acts with a minor.

In another incident, Kelly and McDavid allegedly agreed to pay Minor 2 about $250,000 for her to return a tape that showed Kelly in sexual acts with her and Minor 1.

As a condition of being paid money for returning videotapes that depicted KELLY engaged in sexual contact and sexual acts with minors, KELLY and MCDAVID directed Minor 2, Individual B, and Individual C to take polygraph examinations regarding whether they had returned all copies of such videotapes.

5. In 2008, Someone Was Going to Expose Kelly in a Press Conference, Prosecutors Say (Illinois)

According to prosecutors, a person identified as Individual B was planning to announce in a press conference that he had videos showing Kelly in sex acts with minors. Kelly, McDavid, and others paid him $170,000 to cancel, authorities said.

Kelly allegedly had Minor 1 lie to a grand jury in 2002. He had her deny that she had a sexual relationship with her and Minor 2, prosecutors said.

The singer also allegedly tried to get Minor 5 to lie to the grand jury that she didn’t recognize Minor 1 in a video under investigation.

Later, in 2007, Kelly and McDavid had Minor 2 meet with a lawyer to deny that she, Kelly, and Minor 1 ever engaged in sex acts with each other, authorities said.

Kelly and his attorney Steve Greenberg previously denied all wrongdoing in an existing criminal abuse case in Illinois state court. In an infamous CBS interview, the singer denied ever doing anything illegal when it came to women.

In a statement Friday, Greenberg said, “The conduct alleged appears to largely be the same as the conduct previously alleged against Mr. Kelly in his current State indictment and his former State charges that he was acquitted of.”

“Most, if not all of the conduct alleged, is decades old,” he continued. “Mr. Kelly was aware of the investigations and the charges were not a surprise. He had already assembled a team of outstanding federal litigators. He and his lawyers look forward to his day in court, to the truth coming out and to his vindication from what has been an unprecedented assault by others for their own personal gain.”