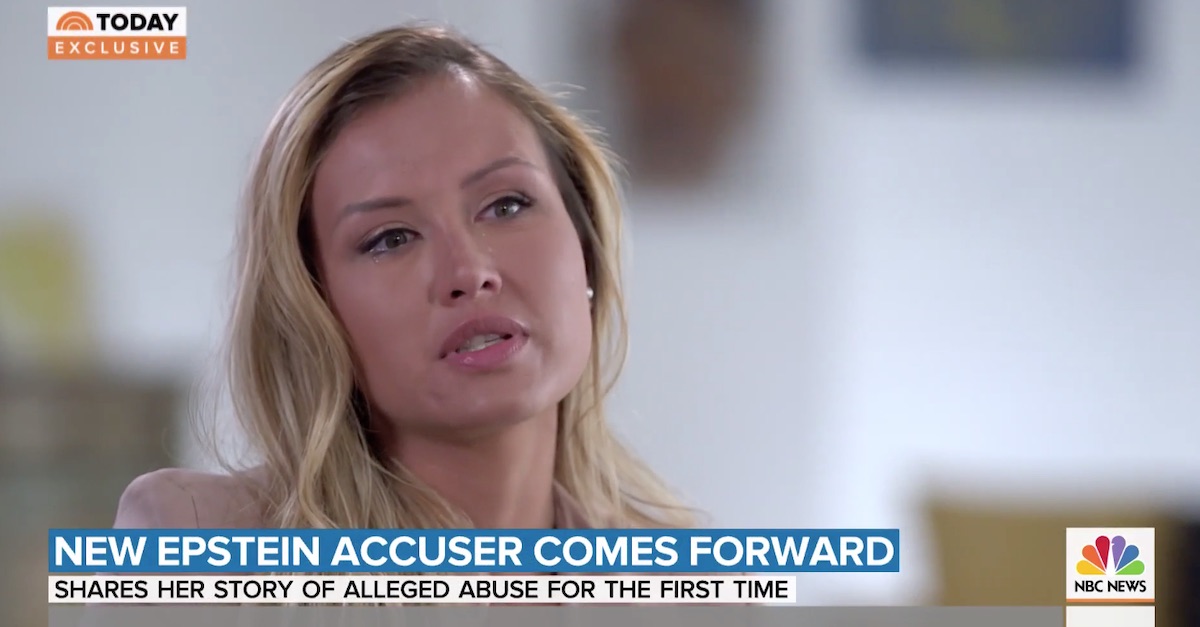 A 32-year-old woman has come forward with allegations that Jeffrey Epstein raped her when she was 15 years old. The details that Jennifer Araoz provided NBC News on Wednesday match up in many ways with what Southern District of New York prosecutors alleged in the Epstein child sex-trafficking indictment.

Epstein has been accused of sexually exploiting and abusing dozens of minor girls–both at his Palm Beach, Florida and Manhattan, New York homes–from around 2002 to 2005. Prosecutors said Epstein knew the victims were underage because they “expressly told him their age.” The girls were as young as 14. Prosecutors also said Epstein created and maintained a “network” of minors for the purpose of sexual abuse with the help of associates and victim-recruiters.

Jennifer Araoz said that when she was 14 she was recruited outside of her NYC school by a young woman to go to Epstein’s townhouse. That was in 2001. Araoz described strange things at Epstein’s residence–of which there are many–including a painting of a young naked woman that hung on the wall of Esptein’s “favorite room in the house.” In that room was a massage table. “When he first brought me up there, he was like, ‘You know, you remind me so much of this woman in the painting,'” she said.

“All the rooms were very grand and had a lot of artwork, a lot of murals on the walls,” Araoz would say.

Epstein allegedly asked Araoz about her hopes and dreams, and she revealed that she wanted to become an actress on Broadway.

“He would also like when I would play with his nipples,” Araoz said. “He used to get turned on by that. And then he would finish himself off and then that would be the end of it.”

Araoz said, however, that Epstein raped her in 2002.

“He raped me, forcefully raped me,” she said. “He knew exactly what he was doing.” Araoz recalled saying “Please stop,” but Epstein didn’t stop. She said that this was the last time she went to Epstein’s residence; she said she struggled to cope with the trauma for several years.

She said that Epstein did not use a condom. Araoz recalled Epstein saying during a massage, “Why don’t we try something a little bit different?” and “Why don’t you do the massage on top of me?”

Araoz said that when she said no, Epstein replied “It’s okay. You’re fine. You’re not doing anything wrong.”

The indictment did not describe an assault like this one. Araoz was reportedly not one of the three unidentified victims mentioned in the indictment.

Araoz told NBC News that she confided in her mom, an ex-boyfriend and two of her friends that she was raped by Epstein.

Araoz said that when she was recruited outside of school a young woman told her Epstein was “very powerful,” “very wealthy,” and “a great guy” who was “almost like a fatherly figure to her.” Araoz said that she was vulnerable to this because her dad died of AIDS when she was 12. In describing the kind of grooming and manipulation that occurred, Araoz said that Epstein even talked about donating to AIDS charities.

She also said, just as in the indictment, that Epstein was aware of how old she was, having mentioned that she was 14 while Epstein could hear it.

“He knew exactly who he was hanging out with. I don’t think he cared,” Araoz said.