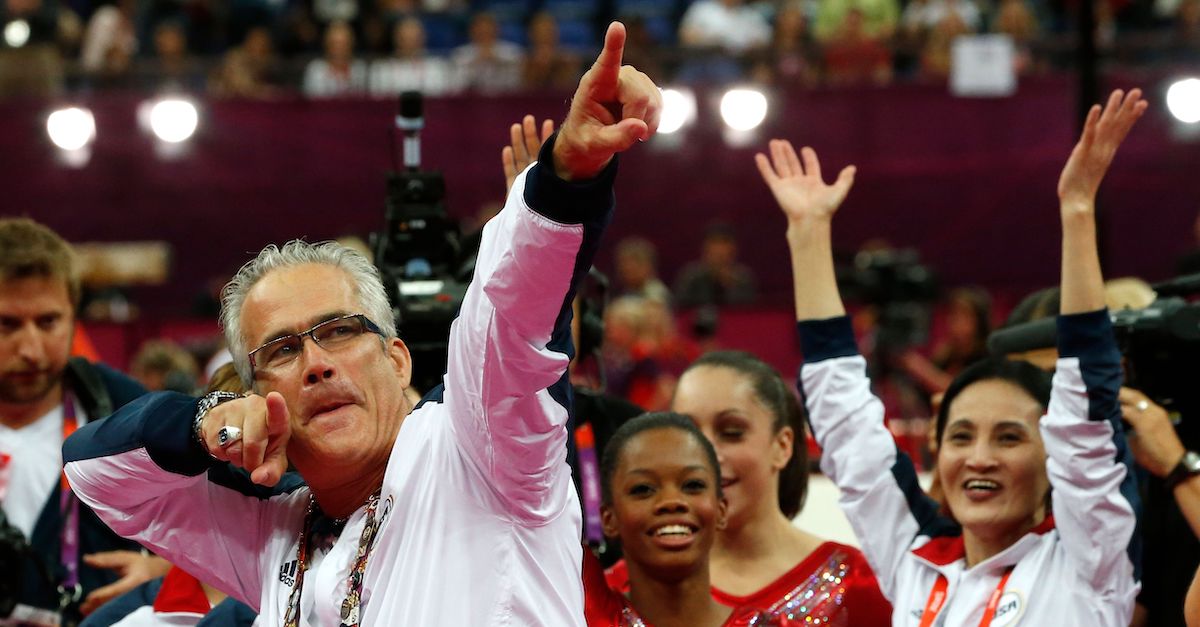 US women gymnastics team’s coach John Geddert celebrates with the rest of the team after the US won gold in the women’s team of the artistic gymnastics event of the London Olympic Games on July 31, 2012 at the 02 North Greenwich Arena in London.

Former U.S. Gymnastics coach John Geddert has been reported dead by suicide hours after being charged with 24 counts, from human trafficking and sexual assault, in a case tied to disgraced doctor Larry Nassar’s serial abuse of women and girls in Olympic sports.

Geddert’s attorney Chris Bergstrom did not immediately respond to a request for comment on his client’s death, first reported by Lansing-based broadcaster WLNS, a CBS affiliate, but attorneys for both parties confirmed the accounts.

“My office has been notified that the body of John Geddert was found late this afternoon after taking his own life. This is a tragic end to a tragic story for everyone involved,” Michigan Attorney General Dana Nessel (D) confirmed in a statement.

Michigan State Police disclosed that troopers found Geddert’s body at the rest area on EB I-96 in Clinton County at 3:24 pm.

Authorities declined to release further details at the time, citing the ongoing investigation.

Accused of covering up Nassar’s crimes and participating abuse on his own, Geddert had faced 24 charges alleging that he committed at least one sexual assault and multiple incidents of physical abuse against dozens of his young female athletes.

“These allegations focus around multiple acts of verbal, physical and sexual abuse perpetrated by the defendant against multiple young women,” Nessel said in a statement. “I am grateful for these survivors coming forward to cooperate with our investigation and for bravely sharing their stories.”

The last count involves Geddert’s alleged misdirection of Michigan State University (MSU) police on Sept. 27, 2016, in which he told officers that “Nassar had a limited role at Twistars as the team physician” and claimed that he had “never heard anyone complain about Nassar’s treatments,” according to court papers.

Nassar’s survivors included gymnasts who went to the doctor for treatment at MSU, among them, USA Gymnastics competitors and several Olympians. More than 150 women and girls ultimately stepped forward against him.

Prosecutors claim that Geddert also falsely told authorities five years ago that “he was not aware of any of his athletes receiving any kind of intervaginal treatments while at the Twistars facility or males are not allowed in the female locker room.”

If convicted of false statements, Geddert would not be the first found to have looked the other way.

Former Michigan State University gymnastics coach Kathie Klages was also convicted of lying to authorities about Nassar, who ultimately received an effective life sentence after pleading guilty to 10 of the charges against him.

“I just signed your death warrant,” Judge Rosemarie Aquilina told Nassar at his sentencing, where she allowed those survivors to speak.

Attorney General Nessel also has convicted MSU’s Dean William Strampel of misconduct in his office and has a case pending against the school’s president President Lou Anna K. Simon. The case against Simon was dismissed in May 2020, but that dismissal now under appeal.

Emphasizing that her work is hardly over, Nessel wrote to the university on Wednesday seeking the release of some 6,000 files to her investigators.

“In this new year, I ask that this Board focus on what is truly important–providing answers to the survivors of Larry Nassar’s terrible crimes and to the people of Michigan who have seen its largest public university mired in scandal,” Nessel wrote to the Board of Trustees’s Chairperson Dianne Byrum. “When this Department set out more than three years ago on this investigation, the Trustees stated, ‘only a review by your office can resolve the questions in a way that the victims, their families, and the public will deem satisfactory and that will help all those affected by Nassar’s horrible crimes to heal.’ Yet, if the Board does not consent, my office will be forced to close its investigation without conclusion, and you will have shut the door on the pursuit of justice. I cannot think of a worse conclusion to the investigation—which this Board asked for—than that.”

MSU’s Board did not immediately respond to an email requesting comment.

Update — Feb. 25, 3:15 p.m. CT: This story has been updated to include reports that Geddert has died by suicide and that the law firm representing him has confirmed he is deceased.

Update — Feb. 25, 3:32 p.m. CT: This story has been updated to include Michigan Attorney General Nessel’s statement confirming that Geddert took his own life.