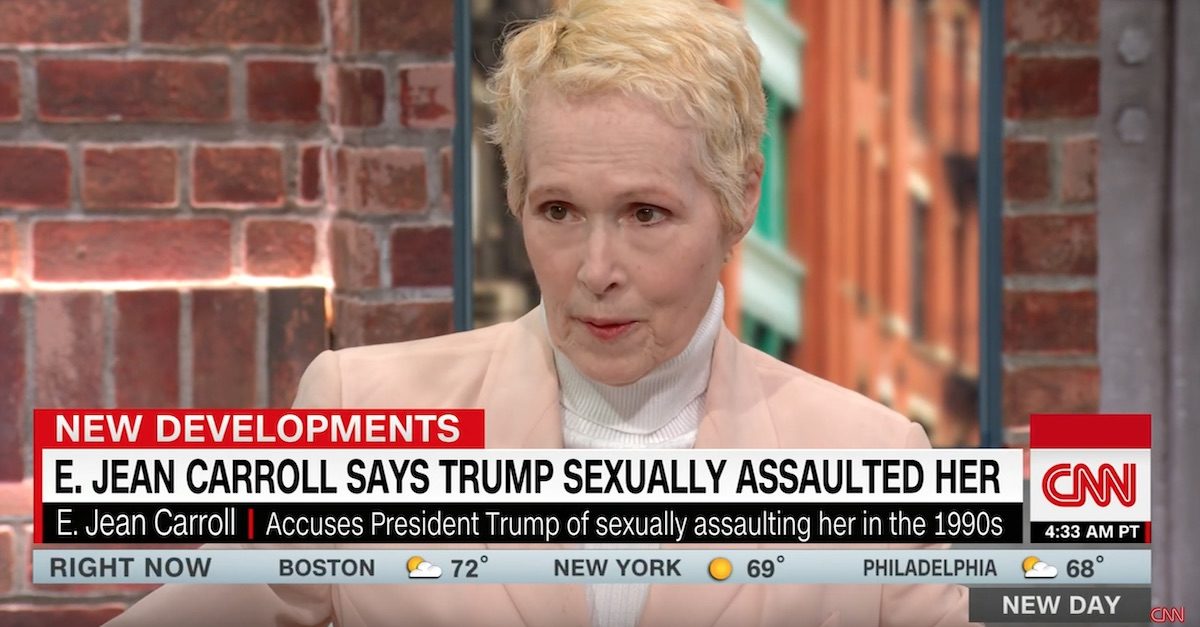 Lame-duck President Donald Trump has used “every stall tactic in the book” in a “desperate” attempt to avoid famed columnist E. Jean Carroll’s lawsuit accusing him of defaming her by denying that he raped her, Carroll’s attorneys told a judge on Friday morning.

The remarks were made at a hearing that Trump lodged an eleventh-hour objection to avoid. At 7:57 p.m. on Thursday night, Trump’s counsel filed a letter to stay all proceedings while they appeal of a ruling preventing the Department of Justice from acting as his private law firm on the taxpayer dime.

“To call that gamesmanship would be an act of charity,” Carroll’s attorney Joshua Matz of the firm Kaplan Hecker & Fink told U.S. District Judge Lewis Kaplan.

Matz added that Trump’s machinations reveal his “desperation” and “fear” of the justice system.

Shortly before the presidential election, Judge Kaplan rejected an attempt to rebrand Carroll v. Trump as Carroll v. United States of America. That attempt to substitute Trump with the nation relied upon the premise that the president acted in a official capacity when he said of Carroll: “She’s not my type.”

The Justice Department argued that Trump made his comment in service of his duties as President of the United States, an argument Carroll’s attorneys characterized as wrong and obscene.

“There is not a single person in the United States — not the president and not anyone else — whose job description includes slandering women they sexually assaulted,” attorney Roberta Kaplan wrote in October. “That should not be a controversial proposition. Remarkably, however, the Justice Department seeks to prove it wrong.”

Agreeing, Judge Kaplan noted in a November ruling: “His comments concerned an alleged sexual assault that took place several decades before he took office, and the allegations have no relationship to the official business of the United States.”

“To conclude otherwise would require the Court to adopt a view that virtually everything the president does is within the public interest by virtue of his office,” the opinion continued. “The government has provided no support for that theory, and the Court rejects it as too expansive.”

Carroll’s attorneys rattled off a series of Trump’s legal maneuvers to delay the lawsuit before he “attempted to abuse the Justice Department.”

When the case was first filed in state court, Trump’s attorneys tried to avoid service, disputed jurisdiction, sought stays and refused to provide documents to Carroll’s counsel. He has tried to fend off production of his DNA to see if it matches the genetic material that Carroll says Trump left on her dress when raping her in the dressing room of a Bergdorf Goodman in the 1990s. The president’s lawyers expressed their intention to fight the case in New York’s court system, before jockeying to have the Justice Department take over and moving the matter to federal court, where it remains today.

Trump’s lawyer Mark Kasowitz, who represented him during the Russia investigation, filed a last-minute letter on Thursday night falling in line with that trend: “I submit this letter motion to respectfully request that this Court immediately stay all proceedings.”

Kasowitz’s co-counsel Paul Burgo claimed precedent is on Trump’s side in pausing proceedings, insisting that an appellate court could find the soon-to-be-former president would be immune from litigation.

“Immunity from liability and immunity from discovery are two different things, aren’t they?” a skeptical Judge Kaplan pressed him.

Carroll’s attorneys will file a motion opposing Trump’s request for a stay on Dec. 17.

Asked about the status of Trump’s appeal, Burgo responded that it would proceed “expeditiously.”

Burgo declined to pin down a date, prompting Kaplan to warn him that doing so would be in his best interest. The judge adjourned without a ruling.

[Image via Screengrab from CNN]