Trump Says Mueller Made ‘Such a Fool’ of Himself in His ‘Testimony.’ Mueller Hasn’t Testified. 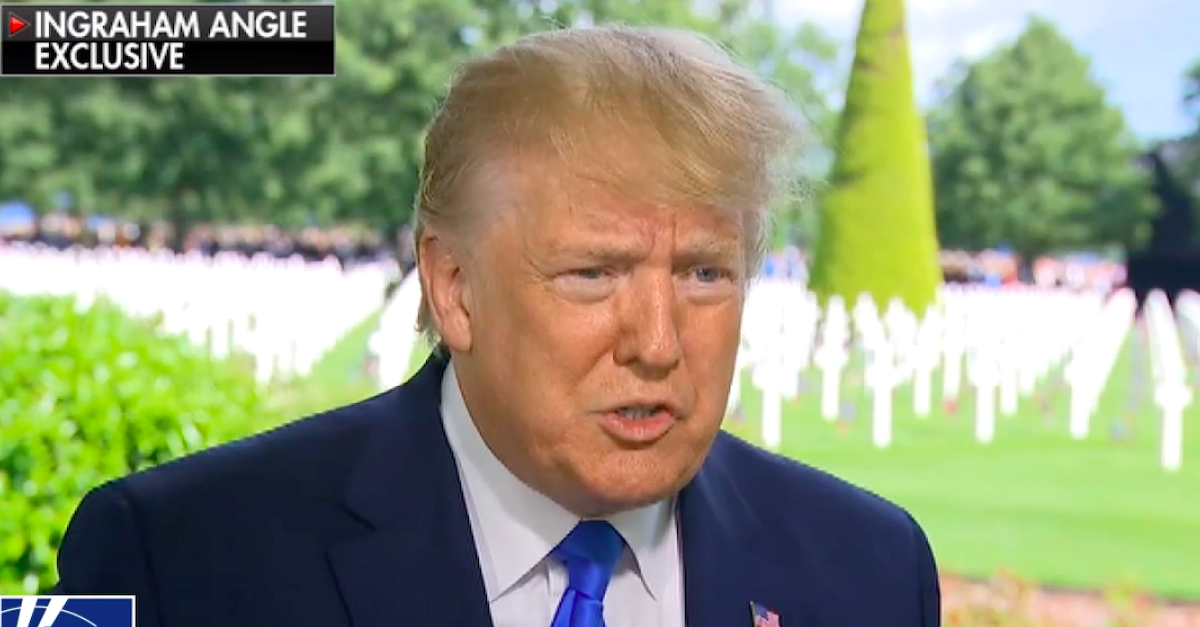 After arriving in Normandy, France to commemorate the 75th anniversary of D-Day, President Donald Trump sat down with Fox News’s Laura Ingraham for a wide-ranging interview on the state of his presidency. Trump did not mince words throughout the course of the interview, saying that Special Counsel Robert Mueller was a “fool,” that tariffs were “beautiful,” and that House Speaker Nancy Pelosi (D-Calif.) was a “disaster.” Trump also said that Mueller had to “straighten out” his “wrong” testimony.

Mueller has not testified and has not corrected anything. In fact, Democrats have been calling for Mueller to testify about the Russia probe; Mueller has resisted those calls. Trump was even asked if he would mind if Mueller testified.

Trump and Ingraham first addressed Mueller, specifically, his May 29 public statement in which he explained his office’s rationale for not pursuing an obstruction of justice indictment against President Trump.

“Charging the president with a crime was not an option we could consider,” Mueller said, citing an Office of Legal Counsel (OLC) opinion stating that a sitting president cannot be indicted. “If we had confidence that the president clearly did not commit a crime, we would have said so.”

“We concluded that we would not reach a determination one way or the other about whether the president committed a crime,” he added.

When asked if he minded whether Mueller testified before Congress, Trump gave a sprawling reply.

“Let me tell you, [Mueller] made such a fool out of himself the last time she … because what people don’t report is the letter he had to do to straighten out his testimony because his testimony was wrong, but Nancy Pelosi, I call her Nervous Nancy, Nancy Pelosi doesn’t talk about it. Nancy Pelosi is a disaster, ok? She’s a disaster. Let her do what she wants, you know what? I think they’re in big trouble.”

It is not clear who Trump is referring to as having given “wrong” testimony, as Mueller has never given sworn testimony relating to his investigation.

The only letter Mueller has written in this case pointed out (correctly) that AG William Barr had distorted the “context, nature and substance” of Mueller’s work and conclusions. https://t.co/FRlOiuugBk