Roy Moore Complained About Not Being Called ‘Chief Justice.’ This Judge Was Not Having It. 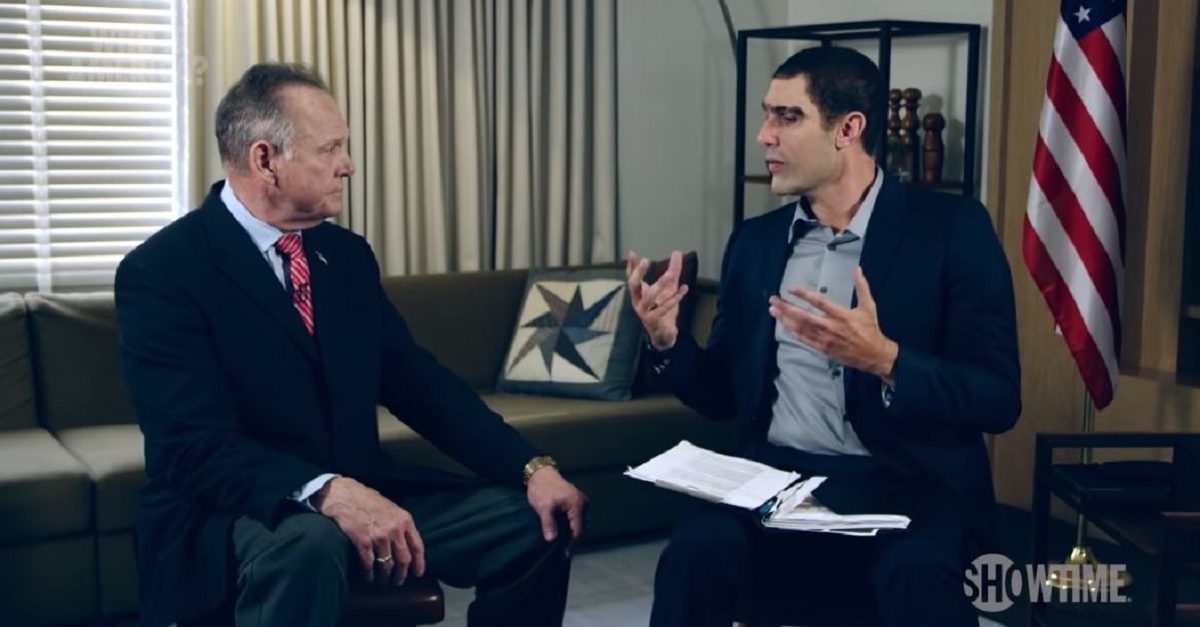 The judge who presided over the defamation lawsuit former Alabama Senate candidate Roy Moore brought against comedian Sacha Baron Cohen and transferred the case elsewhere was not having Moore’s latest complaint.

Moore was evidently not pleased that D.C. Circuit Judge Thomas F. Hogan “appeared” to “disrespect and disparage” him. Moore’s attorney, Larry Klayman, referred to his client as “Chief Justice” and Hogan corrected him.

“Former Chief Judge Moore is no longer Chief Judge . . . [h]e’s now a civilian I take it,” Hogan said. Klayman responded to this perceived slight by asking for Hogan to be removed from the case. Hogan also happened to have granted a motion to transfer the case from D.C. to the Southern District of New York. Klayman and Moore asked the judge to reconsider that decision, recuse himself and randomly reassign the case to another judge in D.C..

Hogan denied that on Wednesday. Along the way, in a footnote, Hogan pointed out that Klayman confirmed that Moore was no longer a chief justice. The judge said this undermined the ensuing “reliance on histrionics”:

The transcript of the hearing speaks for itself on this point and, notably, plaintiffs’ counsel confirmed the factual accuracy of the Court’s comment that Moore was no longer the Chief Justice … by admitting that the comment was factually accurate, the plaintiffs call into question the credibility of their reliance on histrionics to describe the comment as “highly offensive” and reflecting “the need to ‘put [Moore] in his place.'”

Klayman also argued that Hogan “prejudged” his decision by “read[ing] from an obviously pre-prepared and pre-judged ruling.” Hogan responded in his second footnote that Moore cited “no authority for the proposition that, once a court elects to entertain oral arguments, it is precluded from preparing notes in advance in anticipation of issuing a bench ruling at the conclusion of the hearing.”

Hogan did not rule against Moore on the merits of case, but indicated the case would have failed anyway:

Although the Court has serious doubts about the merits of each of the plaintiffs’ arguments, it must forego addressing their shortcomings because it lacks jurisdiction to consider the motion for reconsideration. For that reason, the plaintiffs’ motion will be denied.

The judge further said that Klayman failed to to file his motion in time:

Recall: Moore is suing Cohen over an interview on the satirical show Who is America? Cohen portrayed Erran Morad, a fictitious Israeli counter-terrorism expert, in his interview with Moore. In the interview, Morad takes out a fake Israeli technological innovation that can detect whether a person is a child molester. As Morad waves the device over Moore it beeps. “It must be faulty,” Morad said. “It’s malfunctioning.” Just before Moore walked off the set, Morad exclaims “I am not accusing you at all!”

Moore argued in the complaint that Cohen “falsely painted, portrayed, mocked and with malice defamed Judge Moore as a sex offender, which he is not.”

In 2003, Moore was famously suspended from his position as Chief Justice of the Alabama Supreme Court for refusing to remove a statue of the Ten Commandments from the Alabama Judicial Building–a statue he had personally erected against protests–even after he was ordered to do so by a federal court. Moore responded to his suspension with comments that he would defy court orders in the future, effectively forcing his removal from that office later that year.

Moore then ran for–and won–election as Chief Justice again. He loudly violated the law while in this office again after instructing other judges to continue to enforce the state’s ban on same-sex marriages–even though the Supreme Court had found such bans unconstitutional. He was suspended–but ultimately not removed–from office a second time in 2016. While the case was still pending, Moore simply resigned in order to run for the U.S. Senate seat he eventually lost.

While Moore was running for Senate in 2017, he faced several accusations that he pursued relationships with teenage girls, including an allegation from a woman that Moore sexually assaulted her in 1977 when she was 16 years old and Moore was 31. Moore denied the allegations.