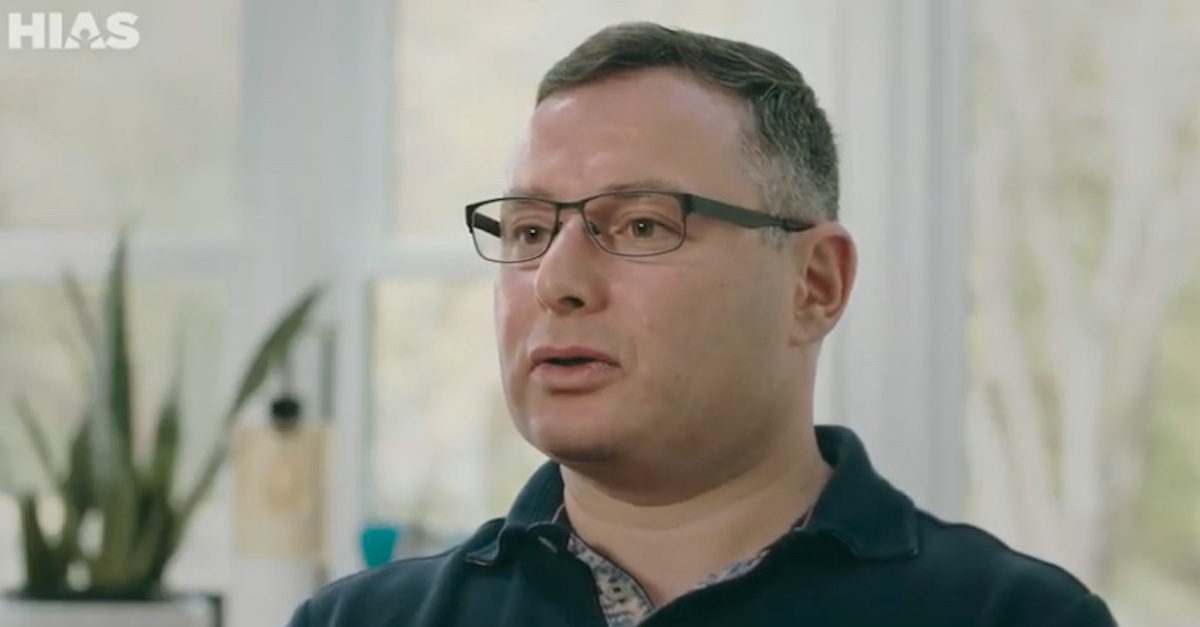 Col. Yevgeny Vindman speaks about his life as a refugee from Ukraine in a video for the refugee resettlement agency HIAS.

A top-ranking Army official who was removed from his position at the National Security Council after raising whistleblower concerns about officials in Donald Trump’s administration—and the former president himself—was the subject of wrongful retaliation, a Defense Department report has concluded.

The Inspector General for the Department of Defense on Wednesday released the results of its investigation into the whistleblower reprisal complaint that Col. Yevgeny Vindman filed almost two years ago.

Vindman, whose identical twin brother is Alexander Vindman, filed his complaint in August of 2020, months after being fired from the NSC.

Vindman has since been promoted to colonel via a March 2021 move by Joe Biden’s administration.

Vindman had raised several red flags to his superiors between July 2019 and January 2020. He first alleged that Trump had violated U.S. laws by asking Ukrainian President Volodymyr Zelensky during a July 2019 phone call to investigate Joe Biden, then a Democratic presidential candidate and Trump’s political rival. Alexander Vindman—as he memorably testified during Trump’s first impeachment trial—had heard the phone call, and the Vindman brothers had told John Eisenberg, then a top Trump adviser, as well as Deputy White House Counsel and NSC Legal Counsel, that they were concerned about the possible illegality of the call.

Michael Ellis, Yevgeny Vindman’s direct supervisor, who was also the Deputy Legal Advisor and Senior Associate White House Counsel, joined that meeting, according to the IG report. Vindman subsequently communicated with Eisenberg two more times about Trump’s call to Zelensky, both in August of 2019.

In January of 2020, Vindman reported that NSC officials “engaged in sexist behavior, misused their positions, and misused NSC staff by asking them to perform personal errands,” the IG’s report said in a summary of Vindman’s complaint. Vindman had also raised concerns about possible ethical violations, mismanagement and waste of funds, and abuse of authority.

All of these complaints, the IG report said, were considered “protected communication” under the relevant statute, 10 U.S.C. § 1034, which prohibits retaliatory action against a member of the Armed Forces who reports what they reasonably believe is a violation of any law or regulation. Whistleblowers are also protection from retaliation for reporting violations that include gross mismanagement, waste of funds, abuse of authority, a danger to public health or safety, and threats by a member of the Armed Forces or U.S. government employee against either military or civilians.

The apparent retaliation against Vindman was swift, according to the report.

Indeed, a comparison of the comments on Vindman’s reviews from 2019 and 2020 reveals a striking reversal and change in tone.

“Yev is an excellent attorney who is trusted to work on complex and sensitive issues,” Ellis wrote in Vindman’s OER covering the time period from May 30, 2018, through May 31, 2019. “Yev stepped into a fast-paced and challenging environment and excelled.”

Eisenberg had similarly enthusiastic praise for Vindman at the time.

“Yev is a top 1% military attorney and officer and the best LTC with whom I have ever worked,” Eisenberg wrote, adding: “Absolutely unlimited potential!”

However, by February 2020, both Ellis’ and Eisenberg’s tones had changed significantly.

“LTC Vindman is a hardworking officer, but he frequently lacks judgment and has difficulty understanding the appropriate role of a lawyer in an organization,” Ellis wrote.

Ellis said that Vindman’s “substandard performance … caused him to lose the trust of NSC senior leadership.”

The IG’s report appears to vindicate Vindman’s claims that his poor performance reviews were just a pretense to justify the Trump’s administration alleged retaliation for his whistleblower communications.

The IG report noted that Vindman’s then-superiors rebuffed investigators’ efforts to get their side of the story.

“We attempted to interview Mr. Ellis and Mr. Eisenberg, but they declined to cooperate with this investigation,” the report says. “Based on the available evidence, we conclude that it is more likely than not that Mr. Ellis knew of two of the Complainant’s protected communications, and Mr. Eisenberg knew of three of the Complainant’s protected communications.”

Notably, while the report addressed Vindman’s claim that he was also the subject of retaliation for his brother’s testimony at Trump’s impeachment, the investigators concluded that the analysis wasn’t necessary.

“[W]e do not need to extend, as a matter of law, the protections of Section 1034 to associational retaliation because the strength of evidence regarding reprisal for direct retaliation is so strong,” the report said.

The IG’s office seemed to acknowledge that it was unable to make any effective recommendations for discipline over Yevgeny’s apparent mistreatment.

Vindman’s attorneys said the IG’s report amounts to total vindication of their client.

“The DoD Inspector General Report of Investigation issued today fully vindicates our client then-Lt. Col. Yevgeny Vindman,” attorney Mark Zaid told Law&Crime over email. “Through his protected lawful whistleblowing activities, Lt. Col. Vindman properly reported misconduct involving officials within the Trump Administration’s White House and National Security Council. Based on this latest report, which followed a review by the U.S. Army, it is now conclusive there was illegal retaliation against Lt. Col. Vindman, who has since been promoted to Colonel.”