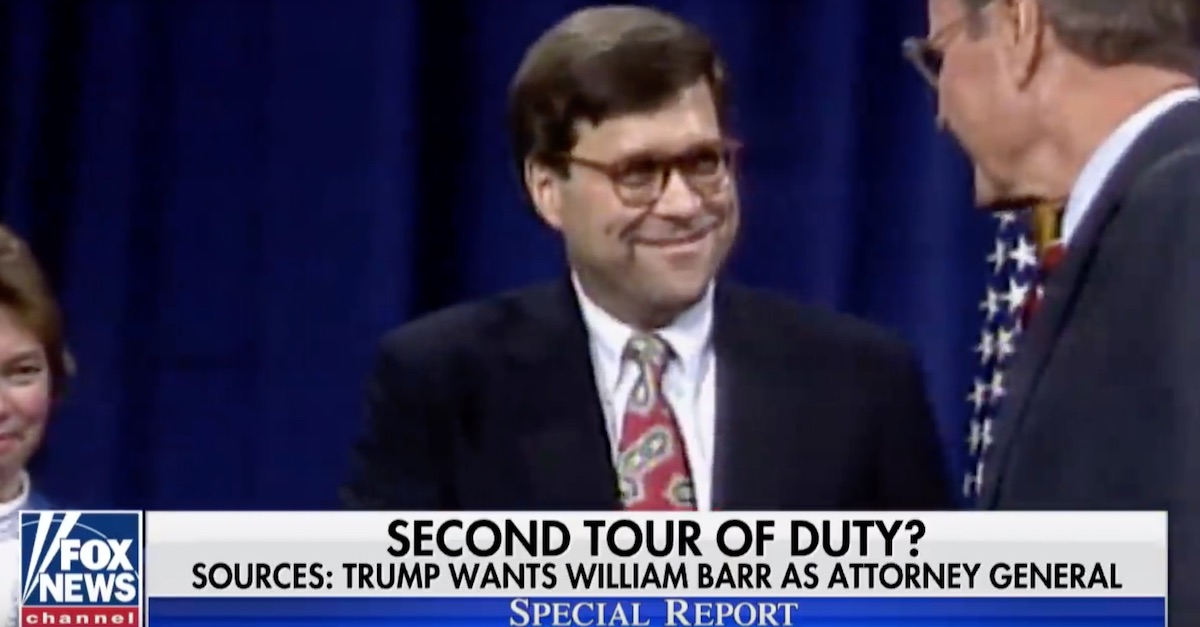 President Donald Trump recently asked Jeff Sessions to resign and propped up Sessions’ former chief of staff Matthew Whitaker as acting Attorney General of the United States. As many got to worrying about Whitaker being a puppet, President Trump was apparently looking for a true replacement for Sessions. That appears to be 68-year-old William Barr, former Attorney General under the late President George H.W. Bush.

As was the case after Whitaker was appointed, Barr’s past comments on the issues are being viewed with heightened suspicion. He has defended Trump’s firing of FBI director James Comey and supported investigating Hillary Clinton, but his experience in the Department of Justice appears to give him a better chance of being confirmed in the Senate than Whitaker ever would, given Whitaker’s controversial comments about Robert Mueller‘s Russia investigation. Maybe that won’t turn out to be the case, but you can bet that one thing that will come up in hearings is Barr’s legal opinion on executive authority and independent counsels.

Let’s preface this by saying that 1989 was a long time ago — almost 30 years ago, actually. Barr, then assistant attorney general in the Office of Legal Counsel, wrote a memo that highlighted his concern about legislative “encroachments” on the executive branch’s power. Barr himself wrote that it was “[o]nly by consistently and forcefully resisting such congression­al incursions can executive branch prerogatives be preserved.”

Barr put together a non-exhaustive list counting the ways the president’s power had been threatened. The third item on the list of 10 jumped off the page because Barr is complaining about “Attempts to Constrain the [President’s] Removal Power.”

Barr made clear that he thinks it is “essential” to the president’s power to be able to fire anyone. He wrote:

“Because the power to remove is the power to control, restrictions on removal power strike at the heart of the President’s power to direct the executive branch and perform his constitutional duties,” he continued. “In particular, the inability to remove officers erodes significantly the President’s responsibility to ‘take Care that the Laws be faithfully executed.'”

Barr went on to mention the outside prosecutors brought in for specific cases, writing, “We recognize that the Court upheld restrictions on the executive branch’s authority to remove an Independent Counsel in Morrison v. Olson.” This was in reference to the old rules for Independent Counsels that have since expired, but Morrison has been discussed in reference to Special Counsels like Mueller as well.

“[T]he power of the executive branch will be best preserved by vigorous opposition to such restrictions,” Barr said.