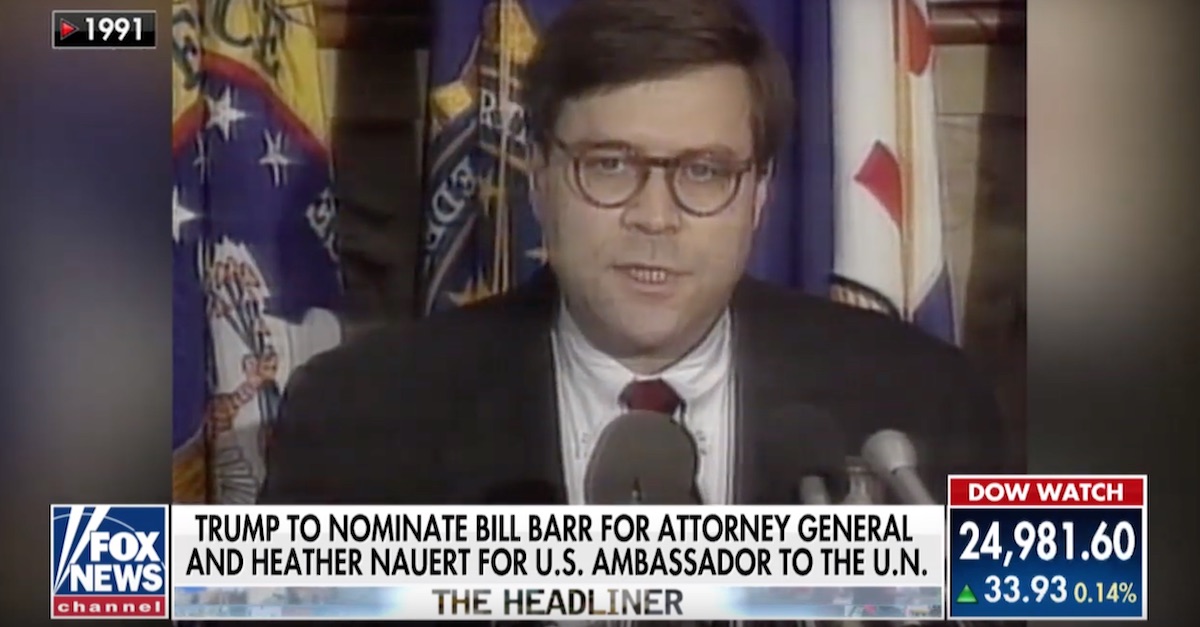 President Donald Trump‘s nominee for United States Attorney General, William Barr, has been around the block before. He served in the same role during the administration of the late George H.W. Bush. Barr’s stint lasted from 1991-1993, during which time Bush granted a series of pardons to officials charged in the Iran-Contra affair.

What’s more, a 2001 interview reveals, Barr matter-of-factly said that he advised Bush to do this.

In 1992, Bush pardoned former Secretary of Defense Caspar Weinberger for the various crimes he was alleged to have committed during the Iran-Contra affair–just before Weinberger was slated to go on trial for perjury and obstruction of justice. This final pardon–the sixth in a series of Iran-Contra related pardons–completed a clean sweep for the Iran-Contra criminals who were, in fact, Bush’s own alleged co-conspirators in the national scandal.

Barr would say in 2001 that he “felt [some] had been unjustly treated and [wondered] whether [others] felt that they would have been treated this way under standard Department guidelines.”

“I don’t remember going through the pardon office, but I did ask some of the seasoned professionals around the Department about this, asked them to look into it,” he said. “Based on those discussions, I went over and told the President I thought he should not only pardon Caspar Weinberger, but while he was at it, he should pardon about five others.”

As Special Counsel Lawrence Walsh noted, Bush himself refused to cooperate with the Iran-Contra investigation (Bush was Ronald Reagan‘s VP from 1981-1989) and may have faced similar charges as the infamous six had he not used his pardon power, as The Intercept’s Mehdi Hassan argues here.

President Bush’s pardon of Caspar Weinberger and other Iran-contra defendants undermines the principle that no man is above the law. It demonstrates that powerful people with powerful allies can commit serious crimes in high office — deliberately abusing the public trust without consequence.

Weinberger, who faced four felony charges, deserved to be tried by a jury of citizens. Although it is the President’s prerogative to grant pardon, it is every American’s right that the criminal justice system be administered fairly, regardless of a person’s rank and connections.

The Iran-contra cover-up, which has continued for more than six years, has now been completed with the pardon of Caspar Weinberger. We will make a full report on our findings to Congress and the public describing the details and extent of this cover-up.

Weinberger’s early and deliberate decision to conceal and withhold extensive contemporaneous notes of the Iran-contra matter radically altered the official investigations and possibly forestalled timely impeachment proceedings against President Reagan and other officials. Weinberger’s notes contain evidence of a conspiracy amongst the highest-ranking Reagan Administration officials to lie to Congress and the American public. Because the notes were withheld from investigators for years, many of the leads were impossible to follow, key witnesses had purportedly forgotten what was said and done, and statutes of limitation had expired.

Weinberger’s concealment of notes is part of a disturbing pattern of deception and obstruction that permeated the highest levels of the Reagan and Bush Administrations. This office was informed only within the past two weeks, on December 11, 1992, that President Bush had failed to produce to investigators his own highly relevant contemporaneous notes, despite repeated requests for such documents. The production of these notes is still ongoing and will lead to appropriate action. In light of President Bush’s own misconduct, we are gravely concerned about his decision to pardon others who lied to Congress and obstructed official investigations.

All of this is drawing renewed attention since President Trump has openly discussed the possibility of pardoning his former campaign chairman Paul Manafort, who allegedly lied repeatedly during the investigation by Special Counsel Robert Mueller. The concerns about that extend to other possible pardons. The issue here is whether Barr would agree with his past self and Trump in 2018 on the question of whether Mueller has treated people like Manafort, Jerome Corsi, and Roger Stone unfairly.

We otherwise know that Barr warmed to the idea of investigating Hillary Clinton and supported Trump’s decision to fire James Comey. Barr’s past complaints about restrictions on the president’s authority have also garnered attention.