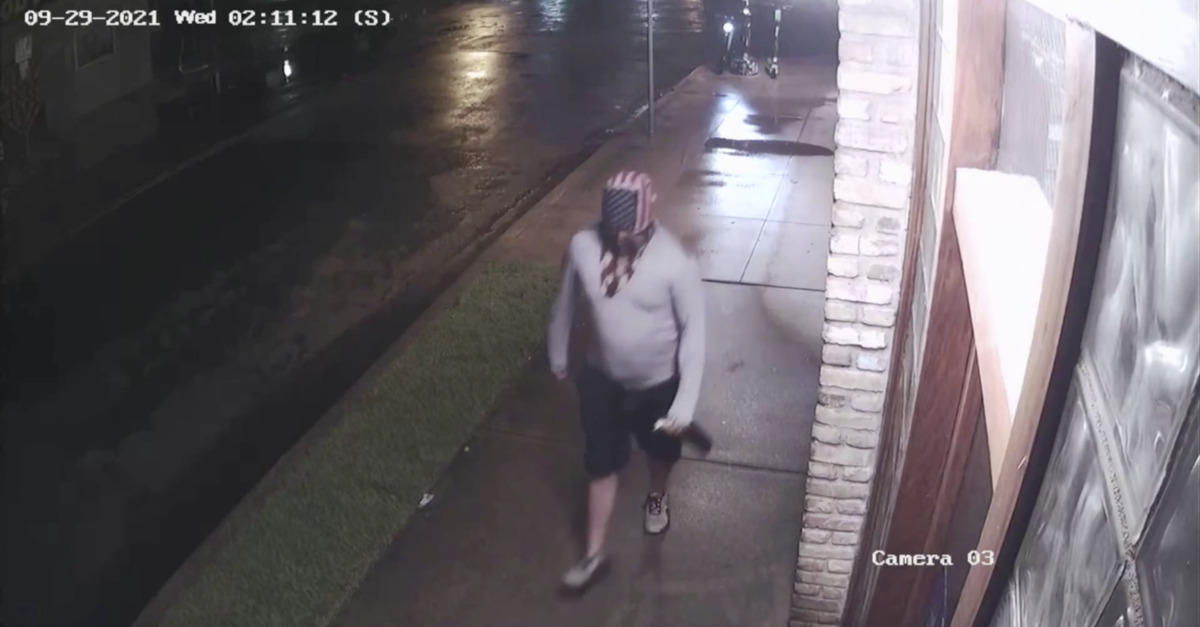 A Texas man has been arrested in connection with the fire-bombing of a country Democratic Party office that was caught on video earlier this week.

Ryan Faircloth, 30, stands accused of arson and possessing a prohibited weapon. He is currently being detained at the Travis County Jail in Austin after being arrested on Friday. He also has a federal charge pending according to the Austin American-Statesman.

In the footage, a man wearing an American flag bandana on his head along with a face mark, black shorts, dark tennis shoes and a gray t-shirt can be seen throwing an object at the front of the building.

Roughly four-and-a-half minutes later, the same man can be seen walking in front of the same building with a dark brown bottle in his left hand. Another seven minutes-plus pass and the same man can be seen running back the way he came. Just before the scurrying culprit makes his way off camera, a small but noticeable flash of light appears in the right-hand corner of the footage. Within seconds, visible licks of flame can be seen in the corner of the windows and spreading.

A separate camera angle from inside the building shows the precise moment the Molotov cocktail was thrown inside the county Democratic Party headquarters. An initial flare-up is followed by a subsequent and much larger explosion that results in a small fire.

The second angle aligns with the timestamp on the prior footage; the projectile explodes in both videos at around the 2:18:38 marks.

“It’s very common to us,” Austin Fire Department Captain Brandon Jennings told the outlet — referring to the incendiary device used in the attack. “It’s known by the public most often as a Molotov cocktail.”

An arrest affidavit obtained by the metropolitan daily news paper says that investigators received a tip that Faircloth was the man in the surveillance video. The tipster allegedly put authorities onto the defendant’s Facebook page where posts appeared to match the style of writing left on a note at the party offices, investigators say.

The unidentified tipster also allegedly provided police with texts from Faircloth, including one in which the defendant allegedly wrote: “6th street location is on watch now.” The Travis County Democratic Party headquarters is located near the eastern edge of Austin’s famous Sixth Street — a lengthy thoroughfare known in the region for its decidedly raucous nightlife rife with ever-present undergraduate excess. It is home to a panoply of bars, pubs, and nightclubs — a social scene buoyed by its proximity to the University of Texas.

Firefighters responded to the office fire just after the blaze took hold after receiving a 911 call. Neighbors put out the fire before authorities arrived and the damage was “minor,” the department said.

Authorities also said they were able to spot Faircloth’s pickup truck on surveillance footage parked near the party offices around the time of the blaze.

“This person was not happy with the current political climate,” Austin Fire Department arson investigator Captain Jeffrey Deane said during a press conference. “He blamed this office and who they represent for a lot of the issues that he saw as problems with the country. He was forthcoming and confessed to that.”

A threatening note, reportedly political in nature, was also left at the scene of the crime, according to Democratic Party officials.

“Our community is freer and safer to participate in elections thanks to Austin Fire Department and FBI investigators and to the engagement of TCDP staff and our neighbors,” Travis County Democratic Party Chair Katie Naranjo said in a statement via Facebook. “Any individual who wraps themselves in the flag and espouses racism, hate, bigotry, and commits violent acts, is a domestic terrorist.”

The defendant is also reportedly a suspect in a separate vandalism that occurred at a building housing Travis County administrative offices on the same night as the fire at the Democratic Party headquarters — again on the strength of surveillance footage.