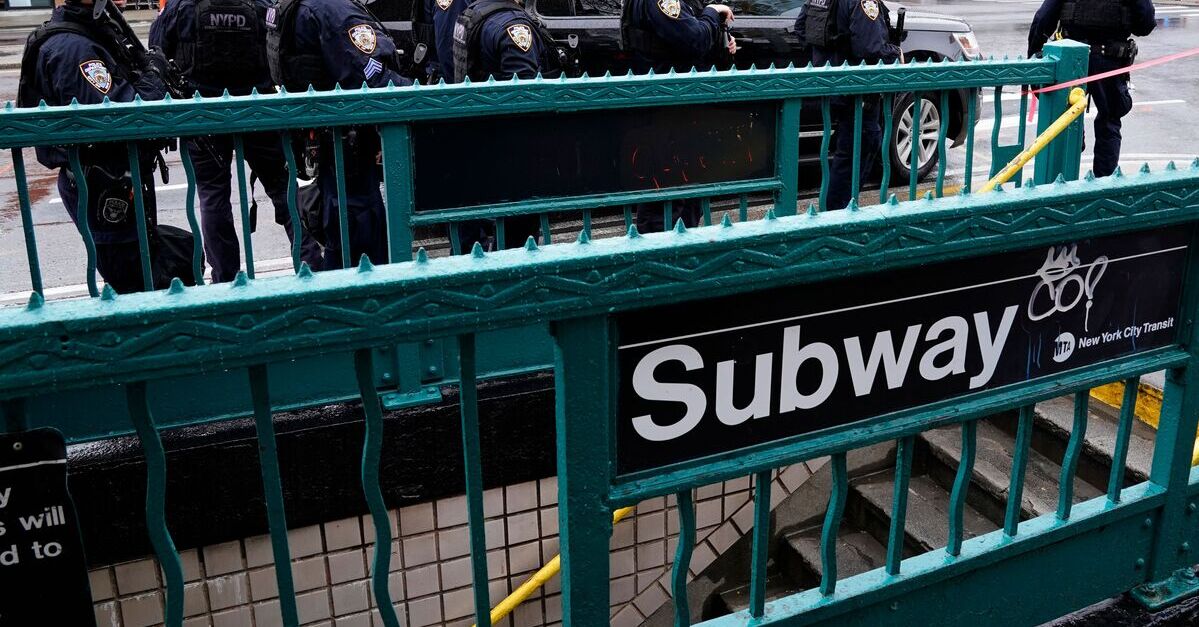 Members of the New York Police Department patrol the streets after at least 13 people were injured during a rush-hour shooting at a subway station in the New York borough of Brooklyn on April 12, 2022, where authorities said “several undetonated devices” were recovered amid chaotic scenes.

At least 16 people were injured in a shooting on the New York City subway system in the Sunset Park neighborhood of Brooklyn on Tuesday morning just as children were heading to school.

Eight of those were victims are confirmed to have been shot, according to the New York City Fire Department, but none of the victims have died or suffered life-threatening injuries. Three hospitals in the immediate area are treating the victims. All schools in the vicinity are currently subject to a shelter-in-place order.

Initial reports echoed the confusion felt by the passengers. One or more smoke canisters are believed have been tossed into a southbound R train on the D/N/R line at the 25th Street station, locking victims inside with no visibility, according to law enforcement sources cited by local ABC station WABC and the New York Daily News. During an early afternoon press conference, however, NYPD Commissioner Keechant Sewell said the incident began on a northbound N train.

The shooting is believed to have started just as the train doors closed. The gunman reportedly continued to fire as people tried to escape from the carnage at the 36th Street station, the next stop on the line. (In Brooklyn, street numbers increase as one travels further south.)

“I was just on the train when a bunch of people got shot,” witness Chad Harley wrote on Twitter late Tuesday morning. “I was on the R train and it happened at 36 st on the N. I got off the train to transfer and the N was there, I saw everyone get off and start heading back to the R. I took out my headphones and heard them saying, ‘if you’re on the platform get on this train now’. I saw some guy limping by, I took note of it, but it could have been anything.”

A harrowing video shows frightened and screaming subway riders pouring out of the train along with the billowing smoke. Near the end of the footage, a limping, bleeding man falls out of the train car and can be seen leaving a trail of blood on the platform.

A disturbing video from the scene of a Brooklyn subway where this shooting incident unfolded, from police sources https://t.co/kuZ61EtdPC pic.twitter.com/BAExwXUwza

Witnesses described the assailant as a Black man, around 5’5″ or 5’7″, 170 pounds, wearing a green reflective vest and a gas mask.

“I thought he was an MTA worker at first because I was like, I didn’t like pay too much attention,” a woman only identified by her first name, Clair, told the New York Post. “You know? You’ve got the orange on.”

Witnesses said multiple shots were fired on the train as it was moving and as the car pulled into the station while people tried to flee.

“He was shooting everybody,” another witness told WABC.

Multiple Twitter users have said that the majority of the victims appear to be Asian or South Asian. Sunset Park and adjacent Bensonhurst are home to two of New York City’s largest Chinatown neighborhoods.

“Random people just got shot,” another man told WABC, saying that many frightened passengers rushed into a nearby bodega during the immediate aftermath of the shooting. “It was terrifying.”

The attack would have started sometime just after 8:20 a.m. during the mid-morning rush. A Twitter update from the Metropolitan Transportation Authority provides what appears to be the first official notice of the incident–in the form of a somewhat typical delay notice.

Northbound D/N trains are delayed while we investigate the source of smoke on a train at 36 St.

The shooter is believed to have successfully fled through the smoke.

“This perpetrator dropped those smoke cans, if that’s what they are, and shot around, and then exited from that point,” retired NYPD Chief of Detectives Robert Boyce told WABC. “He’s not going to stay on there if there’s smoke on there, even if he has the filter mask.”

A manhunt is currently underway.

The NYPD’s Counterterrorism Bureau was investigating the incident along with multiple other law enforcement agencies in New York City. The FBI is also involved in the investigation. During Tuesday’s press conference, the NYPD said the incident was not being investigated as terrorism at the moment.

Officials have not speculated about a possible motive.