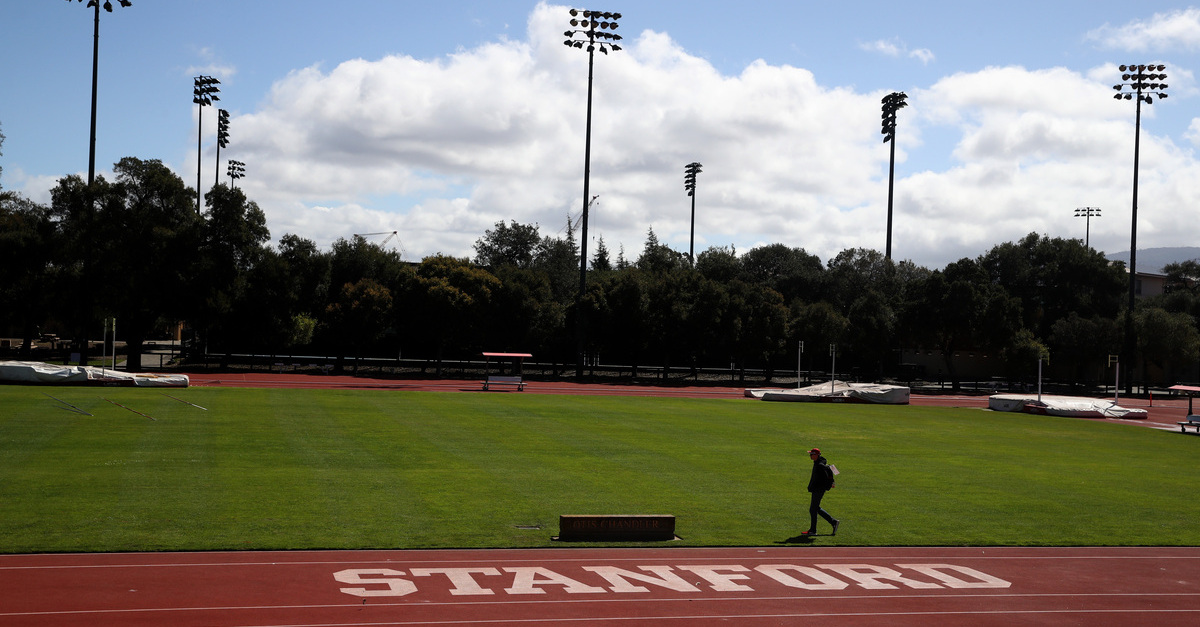 Update: Stanford University has finished its investigation and has released the hold on the degree, according to E.J. Miranda, Stanford’s Senior Director of Media Relations.

A statement provided to Law&Crime notes:

A fundamental standard complaint was filed in the university’s Office of Community Standards against a student in the law school for an email that he had sent out on January 25. We followed our normal procedures and conducted a factual inquiry. Given that this complaint raised issues of protected speech, we also consulted with legal counsel after we obtained the relevant facts. In cases where the complaint is filed in proximity to graduation, our normal procedure includes placing a graduation diploma hold on the respondent.

The complaint was resolved as expeditiously as possible, and the respondent and complainant have been informed that case law supports that the email is protected speech. For that reason, and pursuant to the Leonard Law, the university is not moving forward with the OCS process and the graduation diploma hold has been released.

In recent years, we have seen an increase in the number and complexity of student cases involving free speech, student judicial policies and the California Leonard Law. We will continue to review policies and practices relating to these to ensure ongoing compliance. We are also reviewing procedures for placing holds on student accounts in judicial cases in close proximity to graduation to ensure that holds are limited to cases for which the outcome could be serious enough to affect the timing of degree conferral.

Our original story continues below.

Stanford University is investigating a law student for spoofing the conservative Federalist Society along with Sen. Josh Hawley (R-Mo.) on an email list. Now, a prominent free speech group claims the student’s degree is on the line.

Nicholas Wallace was scheduled to graduate this month but that prospect is now in doubt due to the satirical email sent in January of this year—or rather, because the the law school’s chapter of the Federalist Society complained about being lampooned to administrators at the elite institution.

In the email sent Jan. 25, Wallace attached a mock-up of a flyer for a fake event featuring Hawley and Texas Attorney General Ken Paxton.

The digital flyer contains an extended description of the event:

Please join the Stanford Federalist Society as we welcome Senator Joshua Hawley and Texas Attorney General Ken Paxton to discuss violent insurrection. Violent insurrection, also known as doing a coup, is a classical system of installing a government. Although widely believed to conflict in every way with the rule of law, violent insurrection can be an effective approach to upholding the principle of limited government. Senator Hawley will argue that the ends justify the means. Attorney General Paxton will explain that when the Supreme Court refuses to exercise its Article III authority to overturn the results of a free and fair election, calling on a violent mob to storm the Capitol represents an appropriate alternative remedy.

For most casual observers, the flyer was an obvious send-up of Hawley’s and Paxton’s widely-pilloried efforts to overturn the November 2020 election leading up to the Jan. 6 attack on the U.S. Capitol Complex by supporters of then-president Donald Trump. The Stanford Federalist Society complained that Wallace “attributed false and defamatory beliefs” to Hawley, Paxton and the Stanford branch of the conservative judicial activism group.

The Federalist Society’s Stanford chapter also claimed that some Twitter users and students had been “deceived” into thinking the event was real and that some of those people complained about the group hosting Hawley and Paxton to discuss the fake topic of resisting the U.S. government with force.

Stanford administrators responded with an investigation and paused the release of Wallace’s law degree. If the hold is maintained, then he won’t be able to graduate as scheduled on June 12.

On Tuesday, the Foundation for Individual Rights in Education (FIRE) sent a letter to Stanford calling on the university to “immediately abandon its investigation and commit to procedural reforms to protect the expressive rights Stanford promises to its students.”

The FIRE letter notes that Wallace engaged in speech protected by the First Amendment and the California State Constitution under the guidelines of a law which bars secular private colleges from making or enforcing rules against students that result in discipline for off-campus speech that would otherwise be protected by the nation’s and the Golden State’s founding charters.

“Satire is speech protected under Stanford’s commitment to freedom of expression and Education Code section 94367,” the letter notes. “In initiating an investigation into Wallace—and placing his degree on hold two weeks before his graduation—Stanford has violated its commitment to freedom of expression and California law. FIRE calls on Stanford to immediately abandon its investigation and commit to procedural reforms to protect the expressive rights Stanford promises to its students.”

The controversy ignited a firestorm of criticism–aimed at both Stanford and the unidentified college conservative who went forward with their complaint against Wallace. (The Federalist Society officer’s name has been redacted in all publicly-available documents.)

Yale Law Professor Scott Shapiro took aim at the group via Twitter on Wednesday afternoon, accusing the group of abandoning any commitment to free speech in favor of a new love in so-called “cancel culture,” a constant bogeyman of the political right.

He also continued to mock the group by attributing the fake event to them:

Michigan Law Professor Leah Litman called the situation “appalling” and “sad (for Wallace)” in a thread on Twitter.

“That Stanford would initiate an investigation into a student for sending a satirical email to his peers would be laughable if the stakes weren’t so high for a student on the cusp of graduation,” FIRE attorney Adam Steinbaugh said in a press release. “Stanford’s investigation into satire doesn’t pass the laugh test. Satire is not defamation and no university of any caliber should investigate whether it should be allowed.”

“Stanford is claiming that Wallace’s email was not protected expression under the Leonard Law, but that is simply untrue,” Steinbaugh continued. “We call on Stanford to follow the law and live up to its promises of free expression so that all Stanford students, present and future, can criticize politicians and colleagues alike without fear.”

Wallace said his major concern was that the Federalist Society and Stanford have now created an environment where free speech has been chilled on the most important subjects.

“My concern now is that other students are going to see what’s happening to me and hesitate to voice their opinions on controversial political topics,” he said in a press release. “So I am going to keep fighting this with the hope that Stanford will fix their process so that no student is subjected to this kind of treatment again.”

Stanford did not immediately respond to an email requesting comment.

Editor’s note: this post has been updated to include a response from Stanford University.