No Question Mr. Trump, Senator Marco Rubio is Eligible to be President 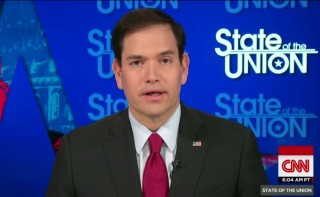 I will try not to make this a long post because frankly there really is not much to debate. Senator Marco Rubio is eligible to be our president. He was born in the United States, and therefore he is a ‘natural born’ citizen by every legal interpretation I’ve come across. Rubio is Trump’s latest target in the ‘birther’ saga that just won’t end. On Saturday, the Republican front runner retweeted a message which said: “Mr. Trump. BOTH Cruz AND Rubio are ineligible to be POTUS! It’s a SLAM DUNK CASE!!”

Um, no, it’s actually not a slam dunk case. In fact, when I reached out to my usual Constitutional legal experts to ask about Rubio — even those that think Cruz’s eligibility is debatable —  most of them were too flabbergasted by the statement’s ridiculousness to give me a serious response.

Rick Hasen, a professor at the University of California- Irvine School of Law, was kind enough to provide a quote.

“The claim is meritless. I’m unaware of any serious scholar or court suggesting that someone born on U.S. soil is not a natural-born citizen if his parents were not citizens at the time,” Hasen told LawNewz.com. Hasen runs the popular electionlawblawg.com.

The Citizenship Clause of the Fourteenth Amendment says: “All persons BORN or naturalized in the United States, and subject to the jurisdiction thereof, are citizens of the United States and of the State wherein they reside.”

Marco Rubio was born in Miami, Florida on May 28, 1971. He was a U.S. citizen from the moment he came out of his mother’s womb. He didn’t have to go through any naturalization process. He is a natural born citizen.  I guess the controversy with Rubio stems from the fact that his parents, who immigrated from Cuba, may not have yet been fully naturalized when he was born. That doesn’t matter.  In fact, the U.S. Supreme Court addressed the issue.

The case is United States v. Wong Kim Ark. It was decided March 28, 1898. Wong Kim Ark was born in San Francisco to Chinese-born parents. After he left the U.S. to visit his parents in China, he was originally denied re-entry into the U.S. based on the claim he was not a U.S. citizen. However, the Supreme Court reversed that decision and said he, in fact, was a U.S. citizen.

The opinion was based upon the British common law definition of natural born citizenship which the Court stated  meant “every child born in England of alien parents was a natural-born subject unless the child of an ambassador or other diplomatic agent of a foreign State.” So the exception is for children of diplomats or ambassadors. Rubio doesn’t fall into that category.

The right of citizenship never descends in the legal sense, either by the common law or under the common naturalization acts. It is incident to birth in the country, or it is given personally by statute. The child of an alien, if born in the country, is as much a citizen as the natural born child of a citizen, and by operation of the same principle…

at the time of the adoption of the Constitution of the United States in 1789, and long before, it would seem to have been the rule in Europe generally, as it certainly was in France, that, as said by Pothier, “citizens, true and native-born citizens, are those who are born within the extent of the dominion of France,” and mere birth within the realm gives the rights of a native-born citizen, independently of the origin of the father or mother, and of their domicil;

If you turn to 18th-century jurist William Blackstone, who many believe is the preeminent authority on this issue,  he declared natural born subjects are “such as are born within the dominions of the crown of England.”

Widener University’s Delaware Law School Professor Mary Brigid McManamon wrote an editorial in The Washington Post on why Ted Cruz, who was born in Canada, is ineligible to run for presidency.   She concluded it this way: “The framers of the Constitution required the president of the United States to be born in the United States.”

“The framers only required birth in the US. The child’s parents could come from anywhere. Those who question Rubio’s eligibility rely on a European treatise, not the  English common law. I have found no evidence that the framers relied on anything but the common law for the idea  of ‘natural born citizen,'” McManamon told LawNewz.com.

In fact, like Rubio, both of President Andrew Jackson’s parents were born outside of the United States. They emigrated from Ireland just two years before Jackson was born in 1767. No one has ever questioned Jackson’s eligibility for the White House that I’m aware of.

On ABC’s “This Week” when Trump was asked about his retweet regarding Rubio’s eligibility.  Trump responded: “I don’t know. I’ve never looked at it. Somebody said he’s not, and I retweeted it.”

Unfortunately, Mr. Trump, not everything said on Twitter is true and this is one of those times.