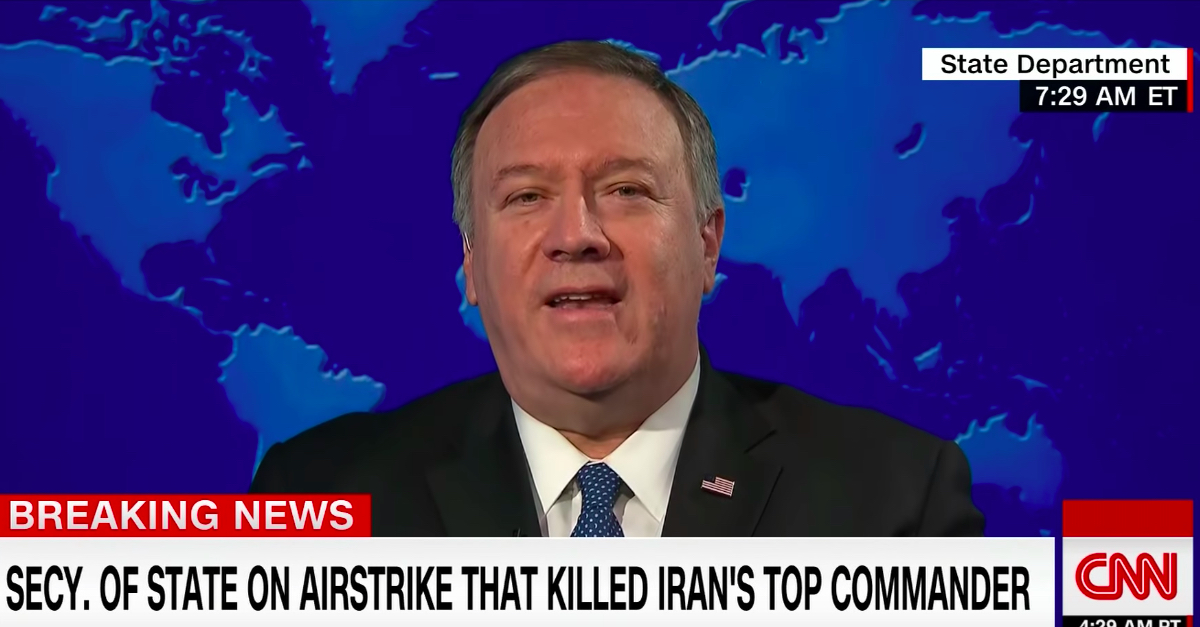 Secretary of State Mike Pompeo on Tuesday again failed to provide any evidence to support the Trump administration position that the killing of Maj. Gen. Qassem Soleimani on Thursday was necessary and justifiable by the “imminent threat” Soleimani posed to U.S. national security.

As questions continue to mount regarding what some sources referred to as “razor-thin” intelligence used to conclude that Soleimani was preparing an impending attack against U.S. diplomats and service members, the nation’s top diplomat continued equivocate, only referencing Soleimani’s past history of horrendous attacks as justification for ordering the strike that took his life.

“There’s been much made about this question of intelligence and imminence,” Pompeo said. “We know what happened at the end of December last year ultimately leading to the death of an American. So, if you’re looking for imminence you need to look no further than the days that led up to the strike that was taken against us,” he said, referring to Soleimani’s alleged role in the death of an American contractor in Kirkuk.

REPORTER: Can you be specific about the imminent threat that Soleimani posed?

POMPEO: "We know what happened at the end of last year & ultimately led to the death of an American. If you are looking for immanence, look no further than the days that led up to the strike." pic.twitter.com/yhqyNToZxd

But this explanation flies in the face of the administration’s previously stated justification for Soleimani’s death being preventative.

In the immediate aftermath of Soleimani’s death, the State Department issued a statement that the killing was a “defensive action to protect U.S. personnel abroad” because Soleimani was “actively developing plans to attack American diplomats and service members.”

Pompeo reiterated the “imminent threat” justifications during a Friday appearance on CNN.

“[Soleimani] was actively plotting in the region to take ‘big action,’ as he described it, that would have put dozens if not hundreds of American lives at risk. We know it was imminent. This was an intelligence-based assessment that drove our decision making process.”

The Pentagon says Soleimani, the commander of  the Islamic Revolutionary Guard Corps-Quds Force, a designated foreign terrorist organization, was “responsible for the deaths of hundreds of American and coalition service members and the wounding of thousands more.”

“He had orchestrated attacks on coalition bases in Iraq over the last several months — including the attack on December 27th — culminating in the death and wounding of additional American and Iraqi personnel. General Soleimani also approved the attacks on the U.S. Embassy in Baghdad that took place this week,” the Pentagon continued.

While no one is arguing that Soleimani wasn’t responsible for atrocities against U.S. service members, the U.S. government’s legal justification for ordering the death of Iran’s top general is a matter of significant import on the geopolitical stage.

“The Administration appears to be completely abandoning their previous claim that the killing was ordered to prevent specific attacks about which they had intelligence,” Rep. Don Beyer (D-Va.) wrote following Pompeo’s press conference.

The Administration appears to be completely abandoning their previous claim that the killing was ordered to prevent specific attacks about which they had intelligence. https://t.co/cMBfhxy86y

“The shifting stories are breathtaking,” Hathaway wrote. “Now the Administration is apparently giving up on the claim that there was an imminent attack necessitating a strike without even informing Congress–probably because it couldn’t produce a shred of evidence. That makes the strike illegal.”

The shifting stories are breathtaking. Now the Administration is apparently giving up on the claim that there was an imminent attack necessitating a strike without even informing Congress–probably because it couldn't produce a shred of evidence. That makes the strike illegal. https://t.co/urCiOOwf1e

The depiction of this operation as retaliation rather than the confrontation of an imminent threat undermines the legality of the strike and calls into question the justification we've heard from senior officials.

Iranian leaders have already called the killing an act of “international terrorism” and vowed to take revenge.

President Donald Trump said Tuesday afternoon that more would be shared tomorrow about what Soleimani was planning.

Trump says tomorrow they’ll discuss what #Soleimani was plotting, when he approved the air strike. “He was a monster” and “he’s no longer a monster. We killed him.” #SoleimaniKilling pic.twitter.com/aMdz6KcvEc

Trump’s national security adviser Robert O’Brien has also said there was “strong evidence and strong intelligence, and unfortunately we’re not going to be able to get into sources and methods at this time, but I can tell you it … was very strong.”