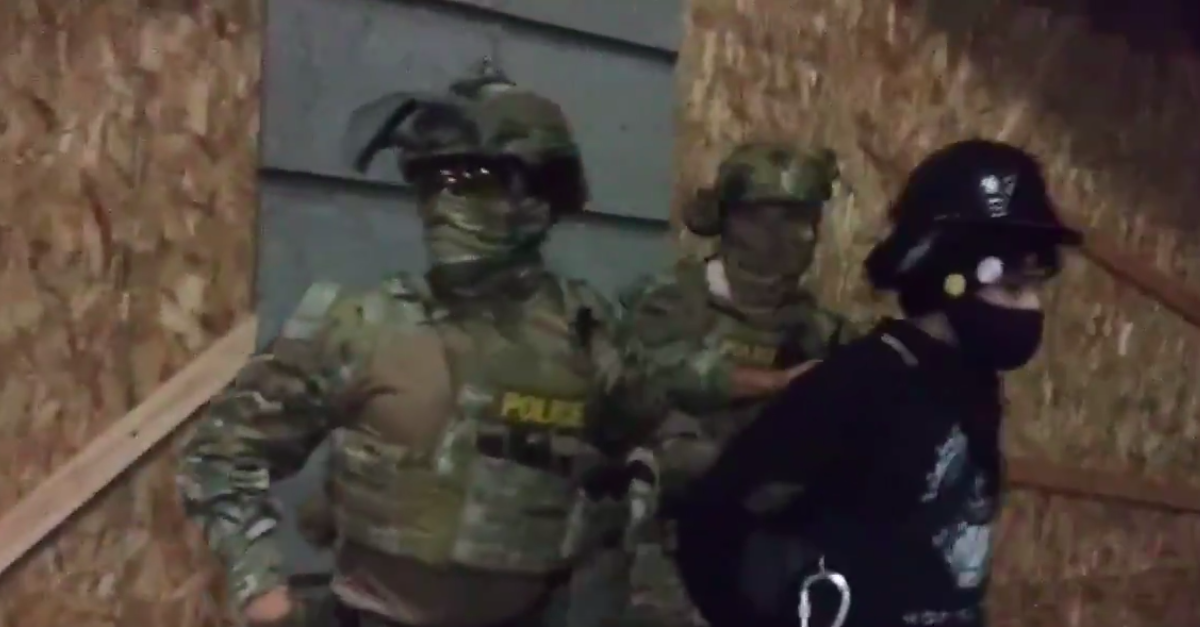 Federal law enforcement officers clad in camouflage uniforms and body armor — without any visible identification — have been using unmarked vans to grab and detain protesters in Portland. That’s according to reporting by Oregon Public Broadcasting (OPB) on Thursday evening.

According to the report, the officers were predominantly sourced from the U.S. Marshals Special Operations Group and Customs and Border Patrol’s Tactical Unit (BORTAC). They were sent to the area with orders to protect federal property amid ongoing protests against police brutality. However, videos and witness accounts provided to OPB and several other news outlets show the officers detaining people who are not near any federal property and putting them in unmarked rental minivans.

These federal officers (?) just rushed up and arrested someone for no reason pic.twitter.com/xcFVuoMZmN

Protester Mark Pettibone told OPB he was walking home from the demonstration when “four or five” camouflaged men jumped out of a black minivan and grabbed him, threw him in the vehicle, and pulled his beanie over his head so he couldn’t see where he was being taken.

“Blinded by his hat, in an unmarked minivan full of armed people dressed in camouflage and body armor who hadn’t identified themselves, Pettibone said he was driven around downtown before being unloaded inside a building. He wouldn’t learn until after his release that he had been inside the federal courthouse,” the report stated.

“Pettibone said he was put into a cell. Soon after, two officers came in to read him his Miranda rights. They didn’t tell him why he was being arrested. He said they asked him if he wanted to waive his rights and answer some questions, but Pettibone declined and said he wanted a lawyer. The interview was terminated, and about 90 minutes later he was released. He said he did not receive any paperwork, citation or record of his arrest.”

In a statement to OPB, the U.S. Marshals Service refused to comment on their use of unmarked vehicles and denied that Pettibone had been arrested by the agency.

“All United States Marshals Service arrestees have public records of arrest documenting their charges. Our agency did not arrest or detain Mark James Pettibone,” read the statement.

Juan Chavez, director of the civil rights project at the Oregon Justice Resource Center, described the tactics to OPB as “stop and frisk meets Guantanamo Bay.”

“This is not good at all. Secret police on our streets,” wrote Western New England School of Law professor Jennifer Taub.

This is seems to be lawless, armed, senseless action by Trump and DOJ and unknown Federal law enforcement agents. These are state and municipal law enforcement responsibilities. WHERE IS THE GOVERNOR? Where is the Oregon Congressional Delegation? https://t.co/4r1UUDXAgf

“We need clarity about what’s going on in Portland. Unlike DC, the fed’l government doesn’t run law enforcement in the state & for its cities,” wrote Vance. “Americans, even ones who violate the law, can’t be disappeared. We’re entitled to answers about what’s happening in Portland & why.”

We need clarity about what’s going on in Portland. Unlike DC, the fed’l government doesn’t run law enforcement in the state & for its cities. Americans, even ones who violate the law, can’t be disappeared. We’re entitled to answers about what’s happening in Portland & why. https://t.co/KoP13cjzxS

Hours after Acting Secretary of the Department of Homeland Security Chad Wolf arrived in Portland on Thursday, federal officers used tear gas and less-lethal munitions to clear protesters away from two federal buildings.

Wolf on Friday praised the officers as “patriots” and as “valiant men and women” who “have defended our institutions of justice against violent anarchists for 48 straight days.”

Our men and women in uniform are patriots. We will never surrender to violent extremists on my watch. pic.twitter.com/kG8w8kyw9E

These valiant men and women have defended our institutions of justice against violent anarchists for 48 straight days. We will prevail. pic.twitter.com/Qo9XoCyH2N