Secret Jeffrey Epstein Documents Have Been Released by Court Order. Read Them All Here.

A hard-fought court battle by alleged groomer and enabler Ghislaine Maxwell has failed, and a cache of forty-seven previously secret court records pertaining to Maxwell’s involvement with Jeffrey Epstein and his alleged victims has been released.  The combined documents contain 638 pages in total by our count.  Law&Crime downloaded all of the documents from PACER, the electronic repository of federal court records, when they were released Thursday night.

Some of the pages contain lists of possible witnesses.  Some have been blacked out entirely.  Some contain short alleged descriptions of Ghislaine Maxwell naked.

Law&Crime is in the process of reviewing the documents.  You can read them yourself in the viewer below.

Electronic searches of the documents came up blank for the words “Trump” and “Clinton.”  However, the names of both presidents do appear in the documents; the names are simply not easy to find.  The Mar-A-Lago club is mentioned dozens of times, as are Great Britain’s Prince Andrew and former Harvard Law School professor Alan Dershowitz.  In one deposition, Epstein accuser Virginia Roberts Giuffre said Epstein himself is the one who took the widely publicized photo of herself with Prince Andrew.  Epstein used Giuffre’s own Kodak camera, she said.

RELATED:  Alan Dershowitz:  Virginia Roberts Giuffre ‘Does Not Understand the Difference Between Truth and Lies’ (WATCH)

Here, Giuffre mentions Clinton and other famous people on Epstein’s plane.  The snippet attached here is from page 145 of the combined document below:

The immediate follow-up made it clear that sexual improprieties were not being alleged; the questioner was merely after the names of people who were on Epstein’s plane. 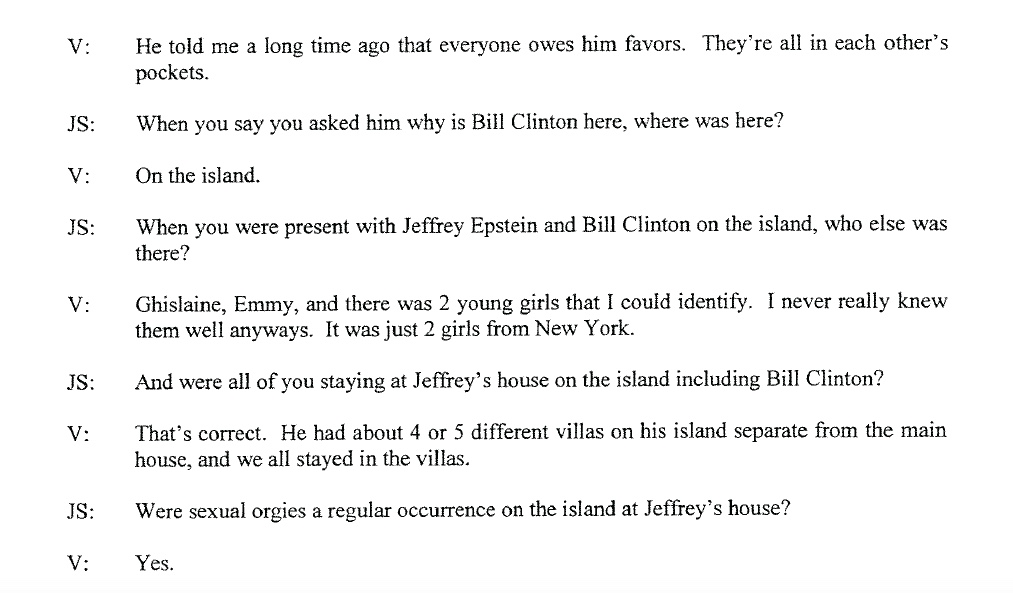 In other documents, Giuffre described the inside of Epstein’s bedroom on his private island; the answer and the following questions surrounded Maxwell’s alleged sex acts there:

A  Okay. Large, stony. He had a king size bed with posts on it. There was a large door, I think it’s called a door, where you put your clothes. There was an adjacent bathroom with a more stony look, giant tub.

Q  What color was the paint on the wall?

Q  What color was the bedspread?

Q What color were the sheets?

Q  And you saw Ghislaine Maxwell have sexual contact with an unknown, unnamed female in that room, correct?

Q  All right. When were you there that you saw this happen?

A  Well, there was quite a few girls and it was — excuse me, if I’m saying this in an inexplicit way, but I don’t know how else to say it. So if you don’t understand, please let me know — girl-on-girl action. So there was a lot of — what’s the word for it? Licking, licking vaginas, breasts.

Maxwell pressed the courts keep the records hidden from the public, but Loretta A. Preska, a federal judge sitting in the Southern District of New York, ultimately ordered that redacted versions of the documents be made public.  Maxwell’s efforts to stall the release of the documents included a blizzard of court papers on Wed., July 29, and continuing into Thurs., July 30.  The requests culminated at the trial court level with a request for a last-ditch-effort telephone conference with Preska.  Hundreds of pages were simultaneously filed with the Second Circuit Court of Appeals.  It was all in vain.

Maxwell’s attorneys attempted to argue that redactions to the documents by attorneys for Giuffre were not properly made.  They also attempted to proffer their own set of redacted documents to cure the alleged problems.

“Prior to receiving Ms. Maxwell’s latest last-minute request, the Court conducted an in camera review of Plaintiff Virginia Giuffre’s proposed redactions to the materials,” Preska wrote.  “Having heard nothing from Ms. Maxwell late this morning, the Court . . . found Ms. Giuffre’s proposed redactions–which include minimal redactions of personally identifiable information, the names of nonparties, and descriptions of nonparty conduct that would allow readers to discern the identity of a given nonparty– to be appropriate.”

In other words, Giuffre’s redactions were sufficient, Preska determined.

It appears from the court dockets that Maxwell’s attorneys were busy filing appellate court documents when Preska was hearing “nothing” from them at the district court level.

The judge suggested Maxwell’s attention should have been focused on the redactions, not the appeal:

With one additional slam in a footnote, the documents were unsealed a few hours later, at about 10 p.m. Eastern time on Thursday:

Just yesterday, the Court admonished Ms. Maxwell for filing an “eleventh-hour request for reconsideration” on grounds that could have been raised well before the Court ordered the relevant documents unsealed. The Court is troubled–but not surprised–that Ms. Maxwell has yet again sought to muddy the waters as the clock ticks closer to midnight.

The appeals court did not rule on Maxwell’s request for intervention in the matter, the court’s docket indicates.

Here is what was released Thursday night.  More documents are slated to be released as late as Monday.

Editor’s note:  This piece began as a breaking news report; it has been updated as Law&Crime has had time to read through the documents.