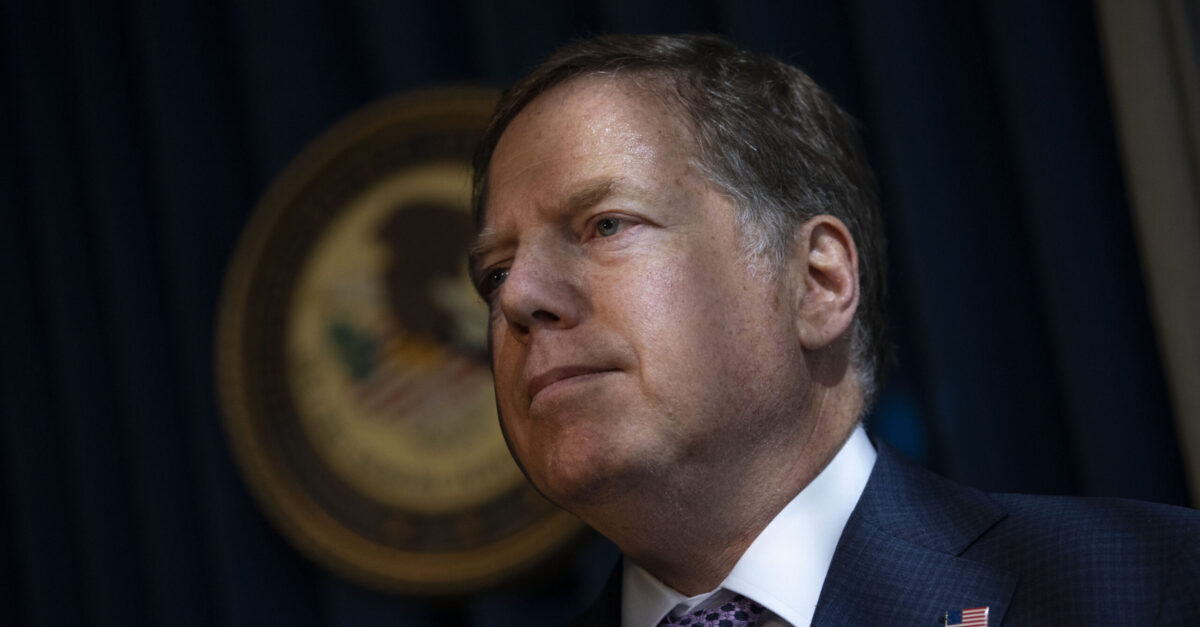 Former U.S. Attorney for the Southern District of New York Geoffrey Berman lost his job over the weekend after he refused to side with a Justice Department move late last week to criticize New York Mayor Bill de Blasio, the Wall Street Journal reported exclusively just after noon Monday.  Yet the actual significance of the temporally-suggestible, potential-smoking-gun incident was unclear, the report says.

Here’s how it reportedly went down. The DOJ asked Berman to “sign a letter criticizing” de Blasio for enforcing social distancing rules during “religious gatherings” but not during “street protests” that arose after the Minneapolis police killing of George Floyd, the Journal reported, citing anonymous “people familiar with the matter.”  Berman “voiced strong objections to the letter, particularly its assertions that Mr. de Blasio imposed a double standard, and described the letter as a political stunt that would strain relations between his office and the city, two of the people said.”

The letter was reportedly never sent. It was “meant to be signed” by Berman and by Eric Dreiband, who heads the DOJ’s civil rights division.

A scientific debate rages over whether outdoor protests may result in an additional spread of the novel coronavirus. The virus appears to spread indoors more than it does outdoors, and coronavirus infections have trended downward in Chicago, despite protests there. At the same time, nearly half of all states in America are reporting an uptick in COVID-19 cases.

The letter’s reported content and intent are logically in line with multiple Barr threats and several actual injections by the DOJ into litigation commenced by religious entities which are in turn unhappy about coronavirus-related restrictions on worship.

DOJ has “repeatedly said that no single incident prompted Mr. Berman’s removal,” the Journal reported. It also noted that Barr and Berman did not directly communicate about the letter.

The Journal went on to pen this beauty about the frayed Barr-Berman relationship:

[T]wo people familiar with the matter said Mr. Berman’s refusal [to sign the letter] aggravated Mr. Barr, who already viewed Mr. Berman as obstinate and difficult to work with. He had been seeking a replacement for Mr. Berman, and when he learned in recent weeks that Securities and Exchange Commission Chairman Jay Clayton was interested in the top prosecutor’s job he agreed that putting him in that role was a good idea, people familiar with that decision said.

Berman’s ultimate ejection from what is widely held as the most critical federal prosecutor’s office in the country came about after a Friday Barr-Berman meeting, a telephone call from Barr to Berman late Friday night, a Friday night comment from Barr that Berman had stepped down, a subsequent statement from Berman that he had not stepped down, a letter from Barr stating President Donald Trump had fired Berman. Ultimately, this ended with Berman stepping down. Berman’s top deputy within SDNY, Audrey Strauss, is taking over.