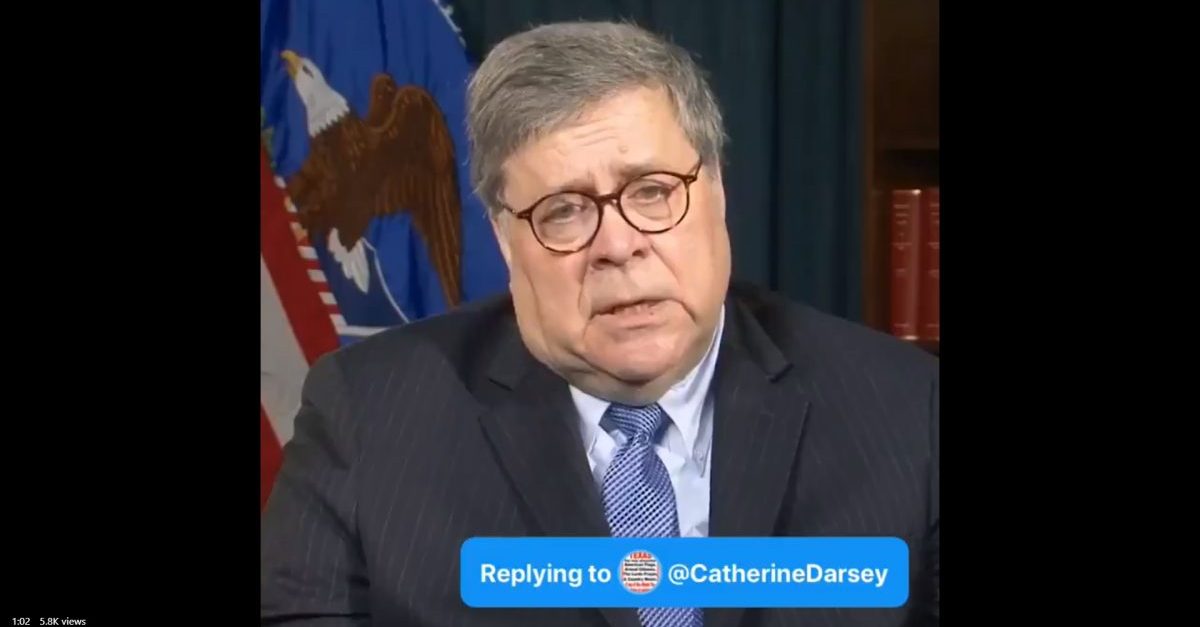 In a Friday question and answer session on Twitter, Attorney General William Barr said the Department of Justice was speaking with state and local governments on ways to curtail coronavirus-related restrictions. The DOJ was poised to act if the states did not cooperate, he suggested.

Q: #AskAGBarr How do you plan to ensure that the Constitutional Rights of Citizens that are currently being impeded by state and city elected officials in regards to personal liberty, religion, and speech during the lockdown orders of the COVID-19 Pandem…
– @CatherineDarsey

“Thank you for your question about protecting the Bill of Rights during the pandemic,” Barr started off his response to a Twitter user identified as Catherine Darsey, who described herself as “a Christian and a Constitutional Conservative.” Her original question, posted Wednesday, was this: “How do you plan to ensure that the Constitutional Rights of Citizens that are currently being impeded by state and city elected officials in regards to personal liberty, religion, and speech during the lockdown orders of the COVID-19 Pandemic is stopped?”

#AskAGBarr How do you plan to ensure that the Constitutional Rights of Citizens that are currently being impeded by state and city elected officials in regards to personal liberty, religion, and speech during the lockdown orders of the COVID-19 Pandemic is stopped?

Barr responded by paraphrasing, but not directly quoting, the Constitutional standard of “strict scrutiny” which is used by courts to examine alleged infringements of fundamental rights. A series of law school professors more thoroughly and accurately described the legal framework in a recent letter to Gov. Gavin Newsom (D-Calif.) which argued that some restrictions in his state went too far.

“The government unquestionably has the right when it’s facing an immediate, catastrophic danger to public safety to impose reasonable and temporary restrictions,” Barr said. The government has to “justify any restrictions as truly necessary” and find “other ways” to address “the government’s interests” toward stopping a pandemic, Barr said, which “are less burdensome” to constitutional rights. That’s a paraphrased way of saying government actions which infringe upon rights must be “narrowly tailored” — that’s the operative legal language.

Barr said, in his view, the original coronavirus restrictions were “appropriate” because of fears that the highly contagious virus would “overwhelm our health care system.”

However, he now sees the virus as being in retreat — a topic of remaining open debate, apparently, among doctors and many others.

“Now that the curve has been flattened — the rate of spread has been slowed — our system has not been overwhelmed. And it’s time to adjust to the situation; it’s time to start rolling back some of these restrictions in an orderly and sensible way,” Barr said with reference to President Donald Trump‘s plan to reopen the country.

He then reiterated how the DOJ would take action.

“We are on the lookout for restrictions that are too widespread, too generalized, and are unduly discriminatory toward liberty such as religious liberty or speech, and we try to work with state and local governments to address these concerns. And, in the appropriate case, we would consider taking action,” Barr said.

The Friday video comments on Twitter mirrored earlier warnings by Barr that he would take action in such cases. He recently appointed two people to oversee such efforts.

A series of responses to Barr’s comments were largely in favor of DOJ efforts to meddle with state shutdown orders, which a few perceived as anything but temporary. Several were hinged to spurious assumptions of law; however, they do speak to the frustration felt by many Americans who wish the country could reopen economically:

Where does it say “gov has the right to suspend liberties “ during a catastrophe?

What is the immediate catastrophic danger to public safety NOW. Temporary IS NOT what is happening. Regulating biz and masks based on this? NOW?

At least one person thought Barr was being too slow to act:

Well he sure doesn’t sound like he is doing anything to prosecute the Governor’s who are violating the rights of the people!! @POTUS @TheJusticeDept @X22Report @John_F_Kennnedy @realDonaldTrump

Some immediately called out the states for punishments not even contemplated by law:

Then you better get involved in CA, IL, OH, AZ, NJ, MI, ME because those governors have gone full authoritarian

@GovMikeDeWine has not shown justification for extending lockdown to May 30 “as truly necessary.” Ohio has met requirements for Phase 1! #OpenOhioNow

I think you need to move on Ca. Gov Newsom right now

We need your help in Maine! Please!

Among the more legally probing questions was this one:

“The government unquestionably has the right …”

I don’t want to be pedantic, but the government has no rights. They have powers. And those powers must be explicitly granted.

So, specifically, where is the constitutional authority for this supposed power?

Perhaps the Supreme Court of Pennsylvania’s recent decision to dismiss a lawsuit can serve as a starting point for that discussion.

[Image via the U.S. Department of Justice/Twitter]