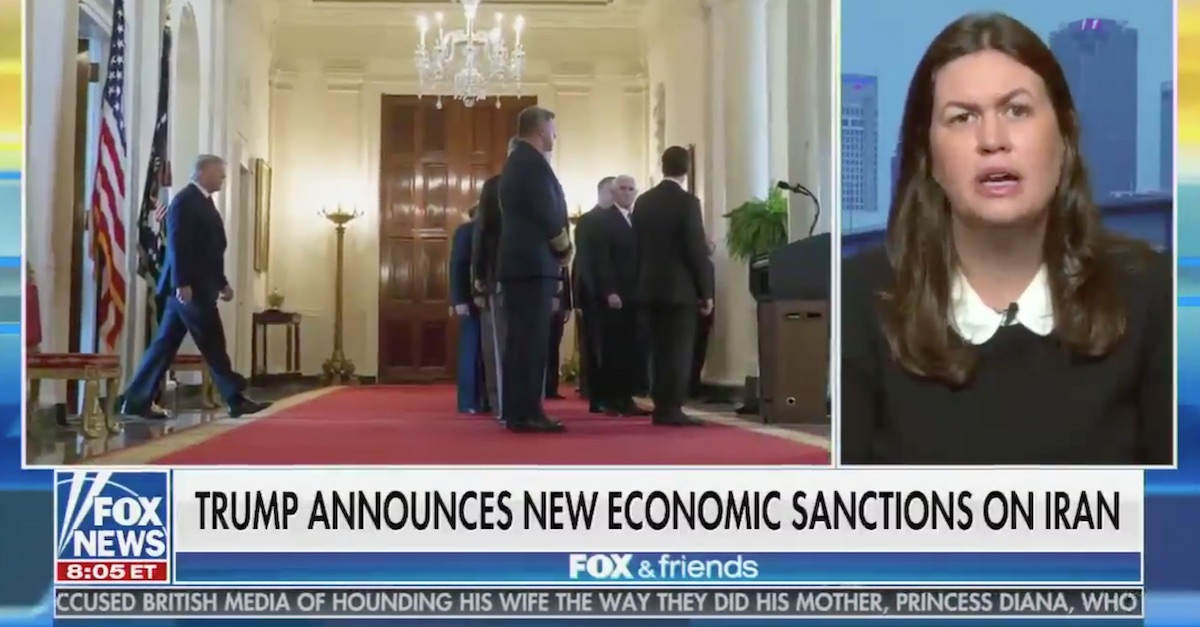 Former White House press secretary Sarah Sanders, in her own words on Thursday, “can’t think of anything dumber” than “allowing” Congress to try and limit the president’s ability to act unilaterally against Iran heading forward.

President Donald Trump ordered an airstrike on Qassem Soleimani, the commander of a designated terrorist organization with the blood of hundreds of Americans on his hands — but also the top military leader of a sovereign nation. It was not the same situation as, say, the Abu Bakr al-Baghdadi raid that ended with the ISIS terrorist leader’s death by suicide.

Some are concerned by reports that Mar-a-Lago members had more of a heads-up about the Soleimani strike than members of Congress. Others, Republican Senators included, are concerned about the Trump administration’s briefing on the strike. Still others are concerned that this escalation, whether intended or not, will lead to another endless war in the Middle East that Congress didn’t sign off on.

While on Fox & Friends, Sanders was asked for her thoughts on an upcoming vote by the House on a War Powers Resolution. Sanders said she couldn’t think of anything dumber than Congress asserting its constitutional powers.

The argument went like this: America is safer now, Soleimani is “rotting in hell,” and that’s all you need to know. Per Sanders:

I can’t think of anything dumber than allowing Congress to take over our foreign policy. They can’t seem to manage to get much of anything done. I think the last thing we want to do is push powers into Congress’ hands and take them away from the president. Any Democrat that doesn’t understand that America is safer now that one of the most dangerous terrorists in the world is rotting in hell is completely naive and completely misses what we need to have in a foreign policy. And the last thing I want to do is see them take power away from President Trump and put it into their own hands. I don’t think anything can be worse for America than that.

“I find it insulting and I find it demeaning to the Constitution of the United States to which we’ve all sworn an oath. It is after all the prerogative of the legislative branch to declare war. Article I, Section 8 makes that very clear,” Lee said.

The administration cited the 2002 Authorization for Use of Military Force against Iraq and Article II of the Constitution as legal authorities to act unilaterally. Meanwhile, the Constitution grants Congress the power to declare war.

On Thursday, President Trump called a War Powers Resolution vote a “fraud” and just another instance of “Presidential Harassment.”

Hope that all House Republicans will vote against Crazy Nancy Pelosi’s War Powers Resolution. Also, remember her “speed & rush” in getting the Impeachment Hoax voted on & done. Well, she never sent the Articles to the Senate. Just another Democrat fraud. Presidential Harassment!

Congress last formally declared war in World War II, but since that time there have been congressional authorizations for use of military force.