GOP Senator Goes Off: Trump Admin Briefing on Iran Was ‘Insulting’ and ‘Demeaning’ to the Constitution 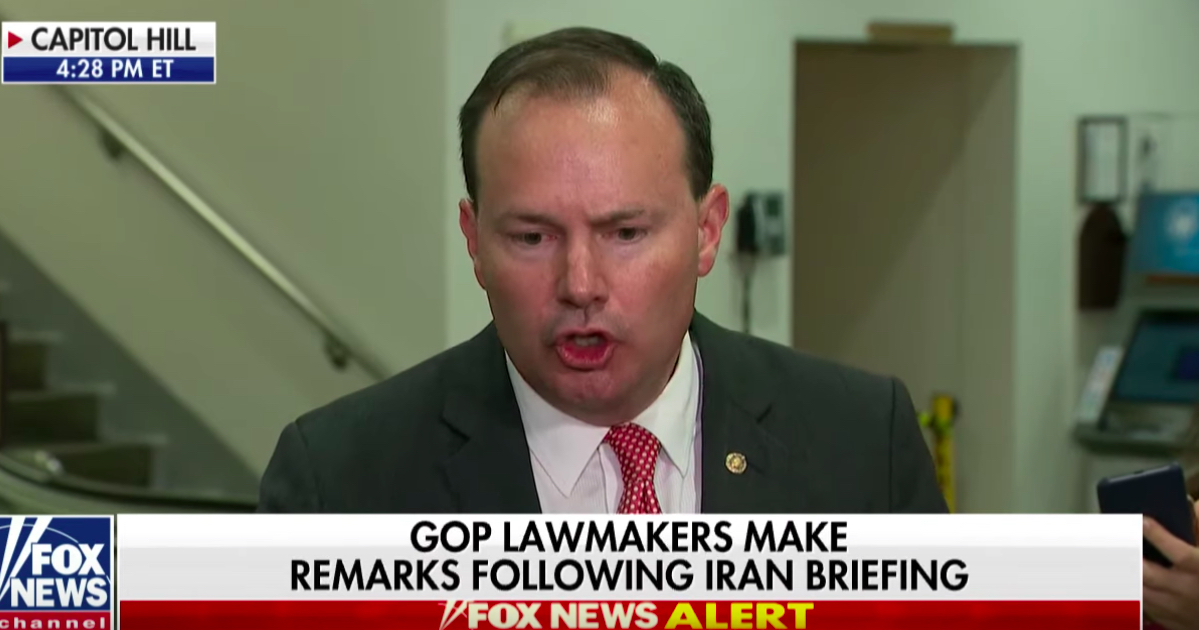 Criticism of the administration’s position that Soleimani posed an “imminent threat” has mounted in recent days, as officials have failed to provide evidence to support that.

In a press conference following the briefing, an incensed Sen. Mike Lee (R-Utah) called the briefing “demeaning” and “insulting.”

“Now, I find this insulting and demeaning – not personally, but to the office – that each of the 100 Senators in this building happens to hold,” he said, seemingly trying to control his anger. “I find it insulting and I find it demeaning to the Constitution of the United States to which we’ve all sworn an oath. It is after all the prerogative of the legislative branch to declare war. Article I, Section 8 makes that very clear.”

The Utah Senator then provided historical context for his anger, explaining how Alexander Hamilton made clear in The Federalist papers that the legislature’s role in declaring war was a “sharp contrast” from the previous form of government which allowed the king alone to bring the nation to war.

Fox News cut away from Republican Sen. Mike Lee as he excoriated the Trump admin’s Soleimani briefing as “probably the worst briefing at least on a military issue I’ve seen.” pic.twitter.com/736Qtd6bWZ

“This, Hamilton explained, was exactly the reason why this power was put in Article I, Section 8. In the branch of government most accountable to the people at the most regular intervals,” Lee said.

Lee also said the briefing was inexplicably void of details regarding the administration’s reasoning.

“I don’t know what they had in mind. I went in there hoping to get more specifics as far as the factual, legal, moral, justification for what they did. I’m still undecided on that issue in part because we never got to the details. Every time we got close they’d say ‘well we can’t discuss that here because it’s really sensitive. ‘We’re in a SCIF!,” Lee exclaimed. “We’re in a secure underground bunker where all electronic devices have to be checked at the door, and they still refused to tell us. I find that really upsetting.”

….fox decided to cut away from the press conference pic.twitter.com/etOlcFJ3iP

Democrats were equally unimpressed with the administration’s explanation.

“There was no raw evidence presented that this was an imminent threat,” Rep. Pramila Jayapal (D-WA) said following the briefing.

Rep. Gerry Connolly (D-Va.) said he was “utterly unpersuaded” by the briefing, which he called “sophomoric and utterly unconvincing.”

Democratic Rep. Gerry Connolly, who just emerged from a briefing on Iran from top Trump administrations officials, called it “sophomoric and utterly unconvincing” adding that he remained “utterly unpersuaded” that the strike on Qasem Soleimani was justified. pic.twitter.com/qToEZjAS39

Rep. Justin Amash (I-Mich.), a former member of the GOP, echoed Lee and Democrats in saying the administration provided no evidence that Soleimani posed an imminent threat. He also decried the administration’s reliance on the 2002 Authorization for Use of Military Force (AUMF) as a legal authority.

The administration has provided no evidence to qualify its recent military action as a necessary defensive response to an imminent attack. Moreover, it absurdly relies on the 2002 Authorization for Use of Military Force and Article II of the Constitution as legal justifications.

Article II is not an independent grant of authority for nondefensive military action. The president’s role as commander in chief no more allows him to enter offensively into conflicts than his role as executive allows him to make laws.

Lee clearly didn’t speak for all Republicans, as Rep. Liz Cheney (R-Wyoming), former Vice President Dick Cheney’s daughter, told reporters the GOP was “absolutely unified as a conference, unified behind the President, unified with respect to the importance, the significance and the righteousness of the action the President took to eliminate Qassem Soleimani from the battlefield.” Cheney notably did not address whether the strike was legally justified.

Rep. Liz Cheney: "We are absolutely unified as a conference, unified behind the President, unified with respect to the importance, the significance and the righteousness of the action the President took to eliminate Qasem Soleimani from the battlefield." pic.twitter.com/Ge1es0NrNS