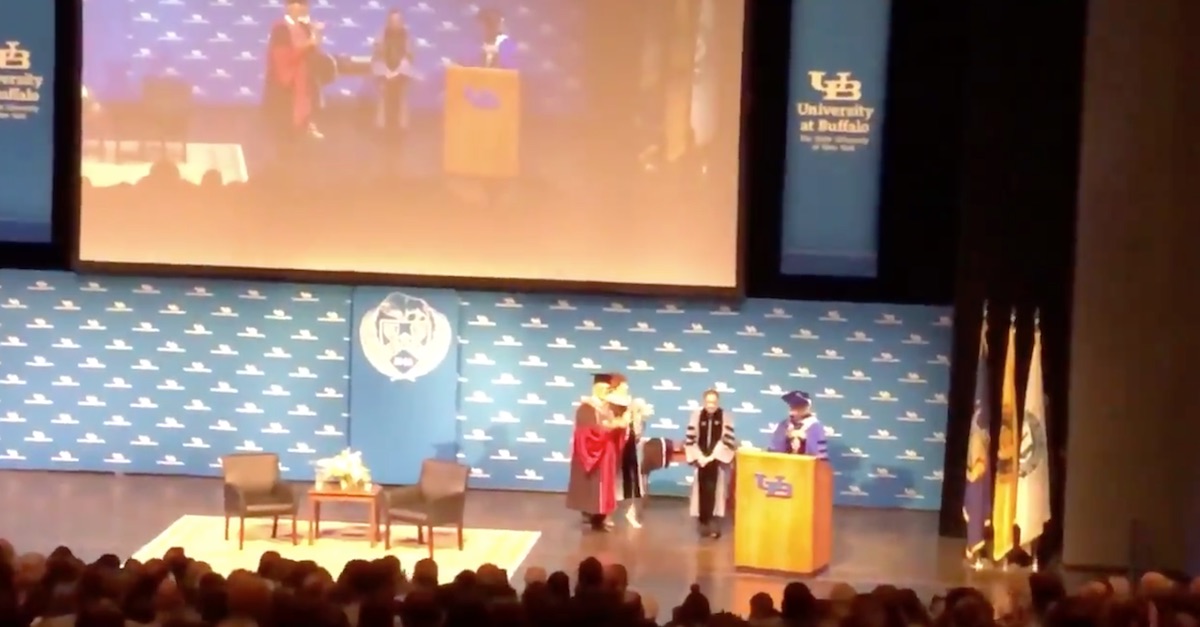 Supreme Court justice Ruth Bader Ginsburg, 86, just three days after it was reported that she had completed radiation therapy for a malignant tumor on her pancreas, made a public appearance at the University of Buffalo, where she received both a standing ovation and an honorary law degree.

Ginsburg, Monday reports said, was scheduled to make remarks and do a Q&A session at the event.

Ruth Bader Ginsburg appears at the University of Buffalo three days after #SCOTUS announced she had successfully been treated for a malignant but localized tumor on her pancreas. https://t.co/lcNrN3q4mH

“It was beyond my wildest imagination that I would one day become the notorious RBG. I am now 86 years old, yet people of all ages want to take their picture with me. Amazing,” Ginsburg said.

In case you missed it, the Supreme Court confirmed in a press release last Friday that Ginsburg had “completed a three-week course of stereotactic ablative radiation therapy at Memorial Sloan Kettering Cancer Center in New York City.” According to SCOTUS, the “focused radiation treatment began on August 5 and was administered on an outpatient basis to treat a tumor on her pancreas.” Alarm bells sounded in early July when a routine blood test indicated that there was an “abnormality.” A biopsy that was performed on July 31 confirmed that Ginsburg had a “localized malignant tumor.”

“The tumor was treated definitively and there is no evidence of disease elsewhere in the body. Justice Ginsburg will continue to have periodic blood tests and scans. No further treatment is needed at this time,” the press release concluded.

Back in Nov. 2018, Ginsburg suffered a fall at court that resulted in three rib fractures and the justice’s hospitalization. While Ginsburg was under observation, doctors found that she had cancerous nodules on her left lung.

The Supreme Court’s Public Information Office announced in December that Ginsburg “underwent a pulmonary lobectomy.” Doctors said at the time that there was “no evidence” of disease after the surgery.