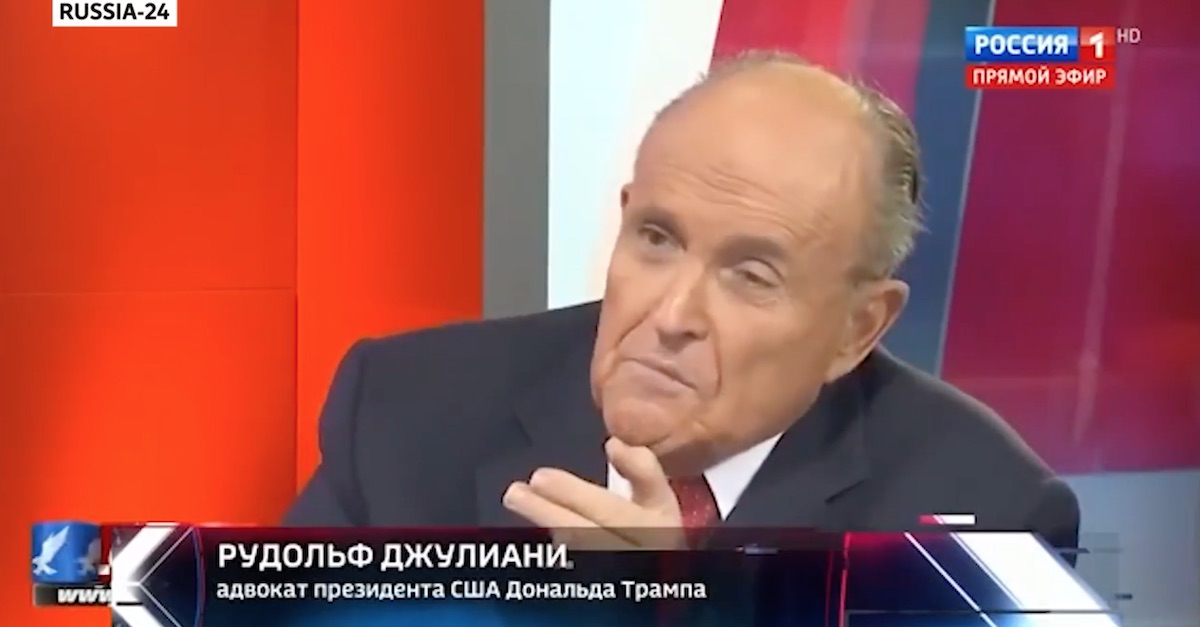 It’s no secret that former New York City mayor Rudy Giuliani relishes the national spotlight, but his recent globe-trotting efforts to produce an “investigative special” promising to “destroy” Democrats’ case for impeaching President Donald Trump appears to be garnering the attention of the wrong country.

Giuliani’s project “Ukrainian Witnesses Destroy Schiff’s Case With Rudy Giuliani,” which was produced by conservative media outlet One America News and hosted by the network’s conspiracy theory purveyor Chanel Rion, was prominently featured on the Russian state-owned news channels Russia-1 and Russia-24 over the weekend.

The segment featured a series of clips from Rion and Giuliani’s discussions during which the president’s personal attorney claims to have uncovered incontrovertible evidence that Joe Biden – not Donald Trump – was guilty of bribing Ukrainian officials during his time in office.

“There is [sic] phone calls from the Vice President to [then-Ukrainian president Petro] Poroshenko – Poroshenko showing up in [former prosecutor general Victor] Shokin’s office and saying ‘Biden’s putting pressure on me. You can’t go forward with Burisma. Can you slow it down.’ And all of a sudden Shokin gets this communique from Latvia that shows a $16 million laundering transaction,” Giuliani says in the clip. Giuliani then claims that the laundered money was used to pay the board of Ukrainian energy company Burisma, of which Hunter Biden was a member.

Fired due to VP Biden’s threat not to release $1B in vital US aid.

Shokin’s med records show he was poisoned, died twice, and was revived.

Lots of heads will roll in Ukraine if this opens up. pic.twitter.com/1W1OgkumXA

“These are the elements of the crime of bribery. I don’t think I’ve ever seen as concise and as tight and as clear a confession. But worse than that, I saw a confession with proof of guilty knowledge by leaving his son out,” Giuliani said.

Despite GOP contentions that Biden pushed for Shokin’s ouster to benefit his son, the former prosecutor general was actually removed in 2016 due to intense pressure not only from the United States, but from many Western nations and the I.M.F., amid criticism that he turned a blind eye to corruption in Ukraine.

The U.S. policy for Shokin’s ouster was a bipartisan effort, as illustrated by a February 2016 letter penned by Republican Sens. Rob Portman, Ron Johnson, and Mark Kirk to President Poroshenko urging him to “press ahead with urgent reforms to the Prosecutor General’s office and judiciary.”

Witnesses in the impeachment inquiry noted that the GOP’s embrace of the CrowdStrike conspiracy theory — that it was Ukraine, not Russia, who interfered in the 2016 election– is favored and promoted by the Kremlin.