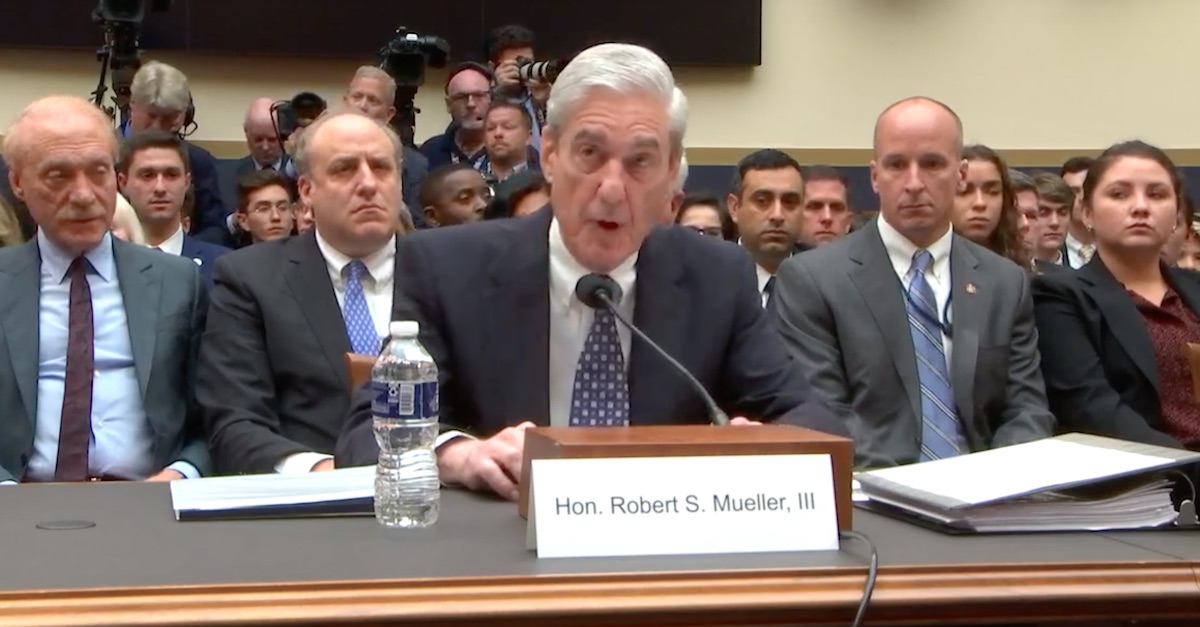 Former Special Counsel Robert Mueller appeared on Capitol Hill bright and early on Wednesday for has long-awaited testimony about his Russia Report.

After making his opening statement, Mueller was asked by House Judiciary Chairman Rep. Jerrold Nadler (D-N.Y.) whether his report “totally exonerated” President Donald Trump, as Trump has often tweeted and claimed about the report. Mueller said “no.”

"Did your report totally exonerate the president?"
"No."

The president tweeted “NO COLLUSION, NO OBSTRUCTION” ahead of the hearing.

NO COLLUSION, NO OBSTRUCTION!

Nadler recalled Mueller’s words–“If we had confidence that the president did not commit a crime, we would have said so. Charging the President with a crime, therefore, was not an option we could consider”–and asked Mueller to put this in a different way for the American people.

Mueller responds: “the president was not exculpated”

“The president was not exculpated for the acts that he allegedly committed,” Mueller said.

What “exculpated” or “exculpatory” means:

Exculpatory describes evidence which tends to justify or exonerate an accused person’s actions and tends to show that they had a lack of criminal intent. It is the opposite of inculpatory evidence, which tends to incriminate or prove guilt.

Interestingly, Mueller acknowledged that a president can be prosecuted after leaving office.

Mueller says true that a president can be prosecuted after leaving office #MuellerHearing https://t.co/gQVUsae4Sg

He also said it was “true” that Trump refused to sit for an interview with his] team.

During Mueller’s opening statement, he stressed that Mueller Report “contains our findings and our analysis and our reasons for the decisions we made.”

“The report is my testimony and I will stay within that text,” he added.

Not to be forgotten in all of this was the very end of Mueller’s opening statement, which said that the Russian effort to interfere with the 2016 election was “among the most serious” challenges to democracy he has seen.

“And let me say one more thing. Over the course of my career, I’ve seen a number of challenges to our democracy,” he said. “The Russian government’s effort to interfere in our election is among the most serious. As I said on May 29, this deserves the attention of every American.”