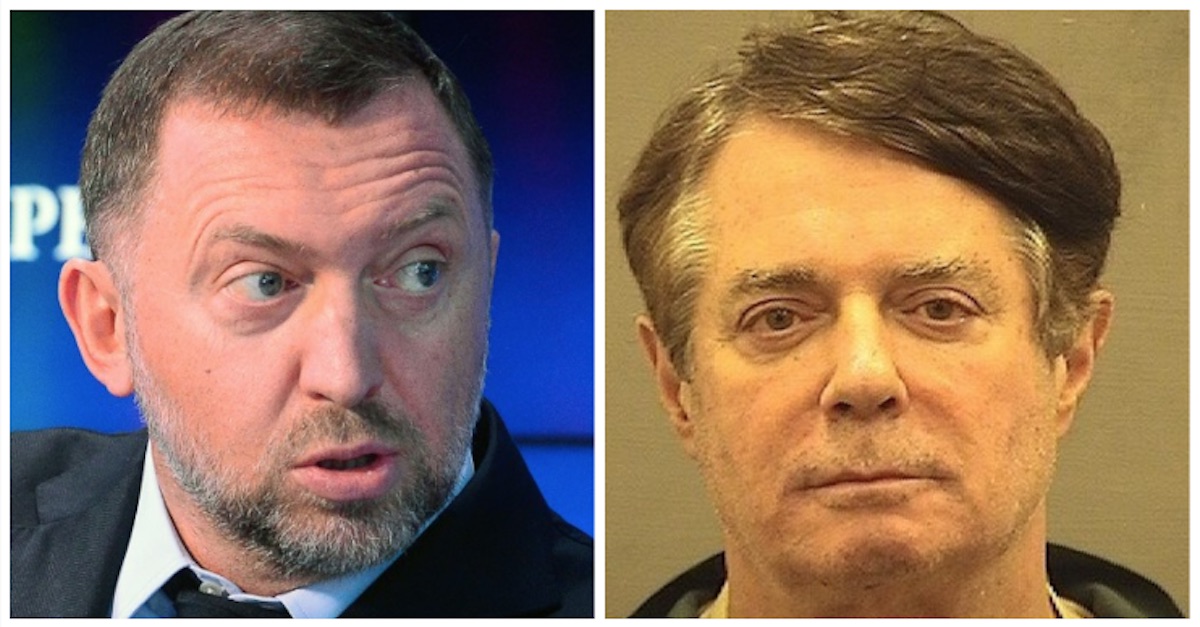 Billionaire Russian oligarch Oleg Deripaska keeps seeing his name pop up in news stories. Earlier Tuesday, a Belarusian “sex coach” went on CNN to claim “Russian agents” tried to keep her quiet about Deripaska. The interview came on the heels of news that the U.S. Treasury was lifting sanctions on Deripaska’s companies.

Now, retired CIA chief of Russia operations Steven Hall is telling the Guardian that Deripaska could be seen as the “missing link” of special counsel Robert Mueller‘s investigation of Russian interference in the 2016 election and links between the Trump campaign.

As Law&Crime has noted on a few occasions, Deripaska has clear ties to former Trump campaign chairman Paul Manafort. Deripaska reportedly paid Manafort to help Vladimir Putin by lobbying for “Putin-friendly oligarchs in Ukraine, and for pro-Russian governments in Georgia, Tajikistan, and Uzbekistan, from 2006 through at least 2009.” Manafort denied that his work for Deripaska was “pro-Russian,” while Deripaska said Manafort was paid for helping with his “business interests.” Manafort was allegedly paid $10 million per year from 2006-2009.

This is the same oligarch whom Manafort allegedly offered “private briefings” on the 2016 Trump campaign. Steven Hall suggested that Konstantin Kilimnik, the Russian national charged for witness tampering who Robert Mueller has accused Manafort of lying about, could have gotten his “marching orders” from Deripaska — who in turn, could have gotten his to-do list from Putin himself.

In Hall’s estimation, it seems “likely the chain of communication would have been Putin to Deripaska to Kilimnik to Manafort.”

“Deripaska would get his marching orders from the Kremlin about what Russia wanted, including lifting of sanctions and a resolution of the situation in Ukraine that favored Russia,” he said, adding that the “Manafort connection to Deripaska is essential.”

Two former prosecutors, one from the Watergate era, quoted in the story made similar comments. Former federal prosecutor Michael Zelden surmised that Mueller’s recent court filings on Manafort “raises the question as to whether Mueller has an ongoing interest in Deripaska in his investigation.” Former assistant Watergate prosecutor Nick Akerman agreed that “It seems quite likely that Mueller would be focused on Deripaska too as he examines Manafort and Kilimnik.”

As Law&Crime noted before, Bloomberg opinion editor Tim O’Brien, for one, also put forth the alternate theory that Manafort lied to Mueller because he was afraid of the “mobbed up” aluminum industry Deripaska is deeply involved in. “I think Manafort is protecting other interests. He has his eyes on other things than the President […] you should look at his client list,” he told MSNBC’s Nicole Wallace.

He said one of Manafort’s most “lucrative” clients was Deripaska, and wondered if Manafort had been silenced. “Manafort stiffed him,” O’Brien said. “I think Manafort may have worries about his family’s well-being because of the people he’s done business with.”

The U.S. Treasury announced in December its intention to lift sanctions that had been placed Deripaska’s company United Co. Rusal, the second-largest aluminum company in the world. It happened after Derpiska “reached an agreement to significantly reduce his ownership stake.” While financial restrictions would be removed, Deripaska lost “significant” control of Rusal, En+ Group Plc, and JSC EuroSibEnergo.

“These companies have committed to significantly diminish Deripaska’s ownership and sever his control,” Treasury Secretary Steven Mnuchin said. “The companies will be subject to ongoing compliance and will face severe consequences if they fail to comply.”

Mnuchin said that the sanctions that were slapped on Deripaska’s companies were intended to hurt him. Now that the damage has been done — Bloomberg reportedthe “value of the aluminum producer has declined by more than half from $9.2 billion more than seven months ago” — Deripaska agreed to cut his ownership share in each company below 50 percent.