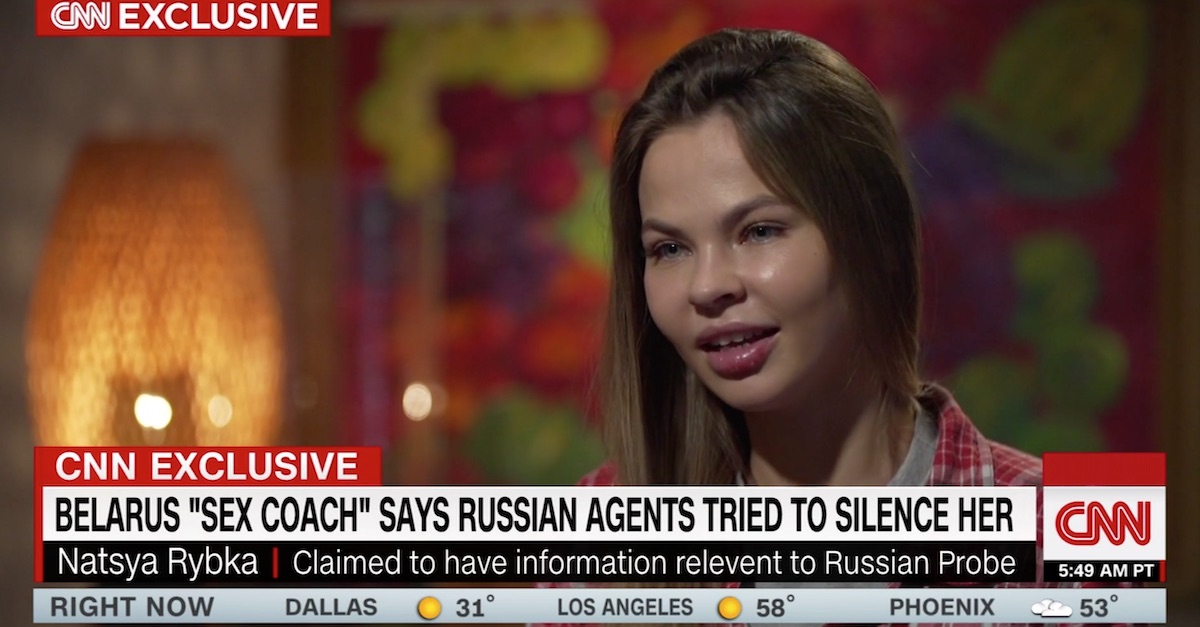 The self-styled “sex coach,” author, and model known as Nastya Rybka (Anastasia Vashukevich) went on CNN Tuesday to say that “Russian agents” told her what and what not to say when it comes to Russian billionaire Oleg Deripaska.

After the Belarusian was arrested in Thailand and jailed, Rybka claimed to have “insider knowledge” and said she worked a stint as Deripaska’s mistress. She said she obtained recordings of the billionaire bragging about his role in the 2016 U.S. presidential election. A video from the model’s Instagram account which appeared to show her on a yacht with Deripaska–who infamously once loaned Paul Manafort some $10 million–added to the intrigue. Deripaska and his allies denounced Rykba as a serial fabricator and said she was never his mistress. Rykba previously signaled that she was unlikely to release those alleged recordings.

Rybka was deported to Moscow and once she arrived there, she claimed, she was instructed by “Russian agents” not to “touch Oleg Deripaska anymore.”

“I had some talk when I was in Russian jail,” she said. “And they explained to me very clear(ly) what should I do, what should I say and what I shouldn’t say.”

Rybka told CNN when she was in the Thai jail that she saw Deripaska meet with three Americans, but is now saying she’s saying she did that to survive.

“I think it saved my life, how can I regret it? If journalists had not come at that time and that story had not come to the newspapers, maybe I would die [be dead by] now,” she said.

Much has been made recently of the U.S. Treasury decision to lift sanctions on companies owned by Deripaska. Recent history shows why that is the case. Deripaska reportedly paid former Trump campaign chairman and convicted felon Paul Manafort to help Vladimir Putin by lobbying for “Putin-friendly oligarchs in Ukraine, and for pro-Russian governments in Georgia, Tajikistan, and Uzbekistan, from 2006 through at least 2009.” Manafort denied that his work for Deripaska was “pro-Russian,” while Deripaska said Manafort was paid for helping with his “business interests.” Manafort was allegedly paid $10 million per year from 2006-2009.

This is the same oligarch whom Manafort allegedly offered “private briefings” on the 2016 Trump campaign. Deripaska’s name recently came up again in the context of Manafort’s cooperation agreement with Special Counsel Robert Mueller.

After that all fell apart, Bloomberg opinion editor Tim O’Brien put forth the alternate theory that Manafort lied to Mueller because he was afraid of the “mobbed up” aluminum industry. “I think Manafort is protecting other interests. He has his eyes on other things than the President […] you should look at his client list,” he told MSNBC’s Nicole Wallace.

He said one of Manafort’s most “lucrative” clients was Deripaska, and wondered if Manafort had been silenced. “Manafort stiffed him,” O’Brien said. “I think Manafort may have worries about his family’s well-being because of the people he’s done business with.”