Prosecutors in Glynn County, Georgia filed a notice last week that they intend to use racist social media posts and texts as evidence against Gregory McMichael and Travis McMichael—the father and son who shot and killed 25-year-old Ahmaud Arbery in the street back in February. They also have evidence of “racial messages” that were extracted from the cell phone of William “Roddie” Bryan, the man who followed Arbery and recorded the shooting.

Prosecutors say that the messages in question amount to “intrinsic evidence” that is admissible under Rule 404 (b). Intrinsic evidence is defined as “[i]nternal evidence or proof of something; especially (Law) evidence relating to a matter which is included or contained in a record, document, statement, etc.; opposed to extrinsic evidence.”

Rule 404 (b) in the Federal Rules of Evidence pertains to “Crimes, Wrongs, or Other Acts.” The rules outline 1) how prosecutors may and may not use this evidence and 2) when they must provide notice if they do intend to use this evidence [emphasis ours]:

(1) Prohibited Uses. Evidence of a crime, wrong, or other act is not admissible to prove a person’s character in order to show that on a particular occasion the person acted in accordance with the character.

(2) Permitted Uses; Notice in a Criminal Case. This evidence may be admissible for another purpose, such as proving motive, opportunity, intent, preparation, plan, knowledge, identity, absence of mistake, or lack of accident. On request by a defendant in a criminal case, the prosecutor must:

(A) provide reasonable notice of the general nature of any such evidence that the prosecutor intends to offer at trial; and

(B) do so before trial — or during trial if the court, for good cause, excuses lack of pretrial notice.

In the notice of intent, prosecutors said that they served the notice to the defendants’ attorney 10 days before trial and that they intend to use the evidences to show “proof of motive and/or lack of motive, intent, to explain conduct, and/or absence of mistake, accident, justification, good character or racial goodwill.”

Prosecutors further said that the state “expects to supplement this notice as more evidence of other intrinsic evidence, bad acts, and racial animus becomes evident.”

So far, the state has identified evidence of “racial messages” in the case of each defendant. The defendants are white and Arbery was Black.

The state detailed the general nature of the posts as follows.

Travis McMichael: “Racial highway video Facebook post” from Aug. 2019; a “racial Johnny Rebel Facebook Post from June 2019; a racial text message from March 2019. An investigator for the Georgia Bureau of Investigation previously alleged that McMichael, 34, called Arbery a “fucking n*****” after the shooting and before the police arrived. The investigator said McMichael had also used the n-word multiple times on social media and phone conversations. 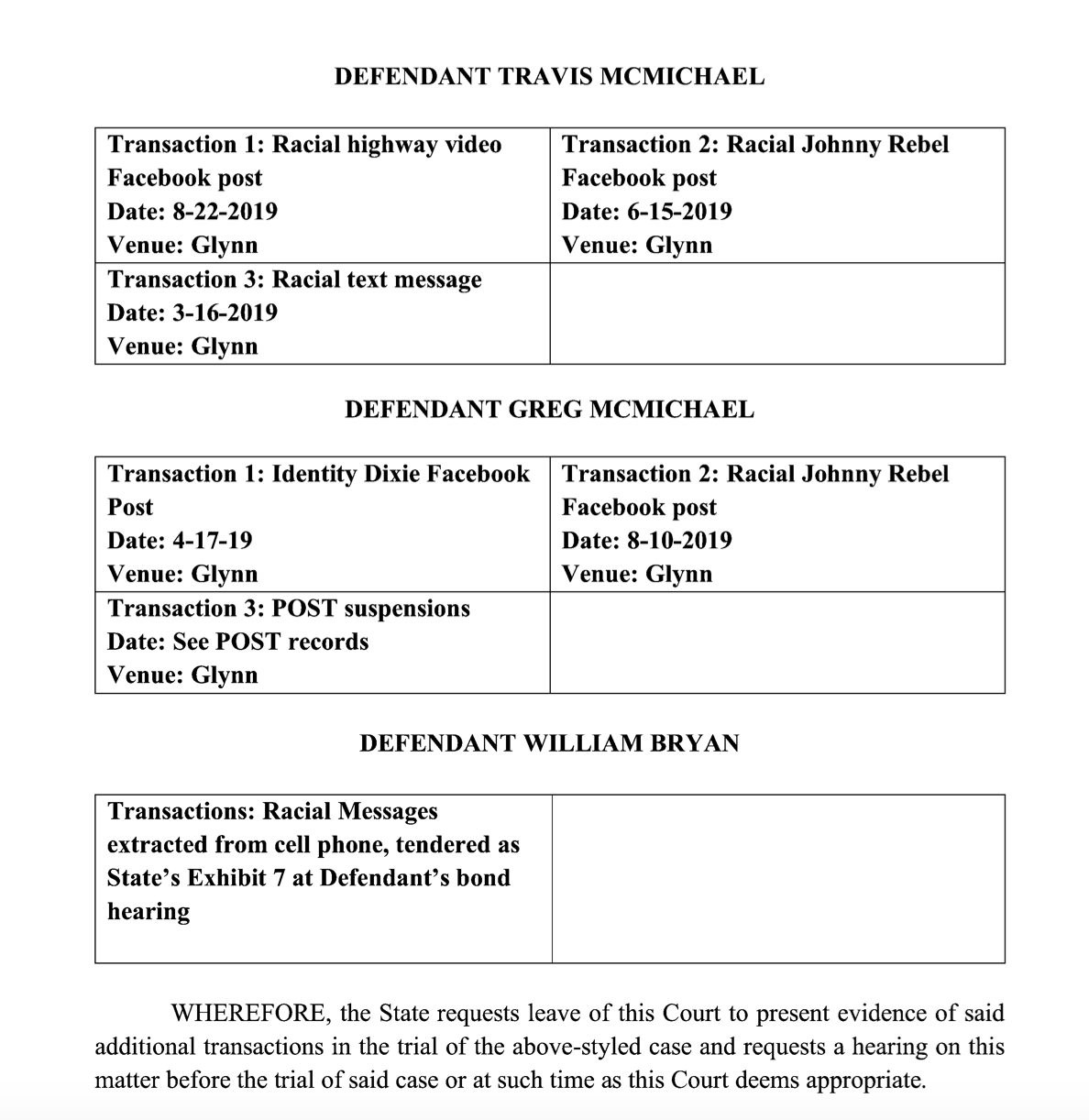