Tim Morrison, a now-former top Russia adviser to the president on the National Security Council (NSC), is expected to testify on Thursday that top U.S. diplomat to Ukraine Bill Taylor’s testimony was accurate. What’s more, Morrison is also expected to speak about a conversation he had with President Donald Trump and U.S. Ambassador to the EU Gordon Sondland — a conversation that left him with a “sinking feeling.”

Per the Washington Post, Morrison will say that he talked to Taylor on Sept. 7 to say he had a “sinking feeling” about a conversation with Trump and Sondland, in which the president denied pursuing a “quid pro quo” as he demanded Ukraine conduct investigations into the Bidens and what happened in 2016:

Morrison also is expected to tell lawmakers that he spoke with Taylor again on Sept. 7 to share a “sinking feeling” about a worrisome conversation between Trump and Sondland, said the person. Morrison will say that, during that conversation, Trump said he wasn’t seeking a “quid pro quo” but went on to insist that Ukrainian President Volodymr Zelensky had to publicly announce he was opening investigations of Biden and 2016 election interference.

Taylor’s open statement elicited gasps and sighs behind closed doors, as he told lawmakers that President Trump conditioned the release of congressionally-appropriated military aid to Ukraine on the country publicly launching an investigation into the Biden family and the hacked DNC server. In the 15-page written opening statement Taylor contradicted the White House’s often repeated “no quid pro quo” defense, stating that Trump’s release of the military aid was contingent on Ukrainian President Volodymyr Zelensky personally saying that he was launching the investigation.

Here was what Taylor said about his conversation with Morrison: 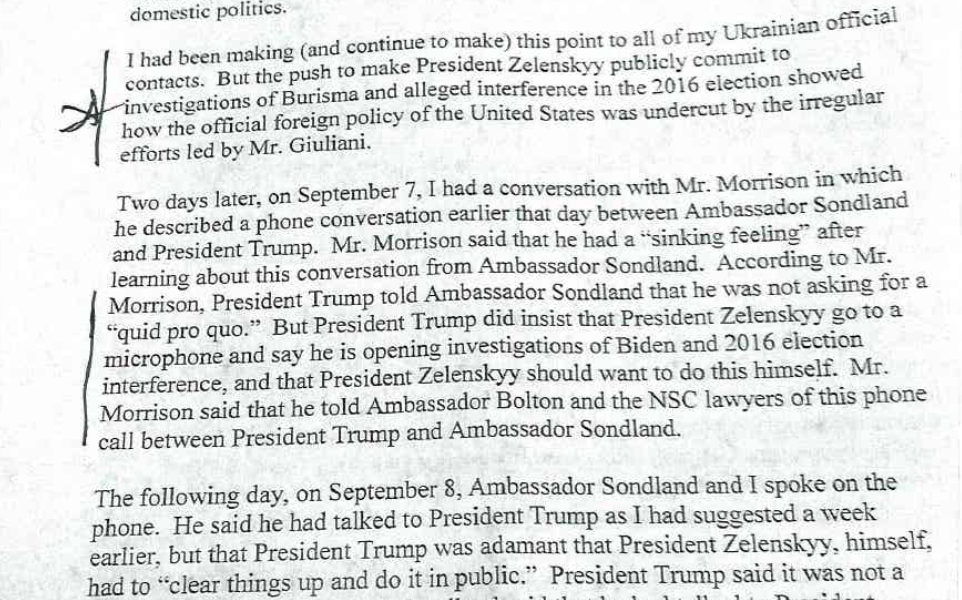 Morrison is expected to back that, but there is a key caveat, per WaPo:

Morrison will also say that he did not necessarily view the president’s demands as improper or illegal, but rather problematic for U.S. policy in supporting an ally in the region, the person said.