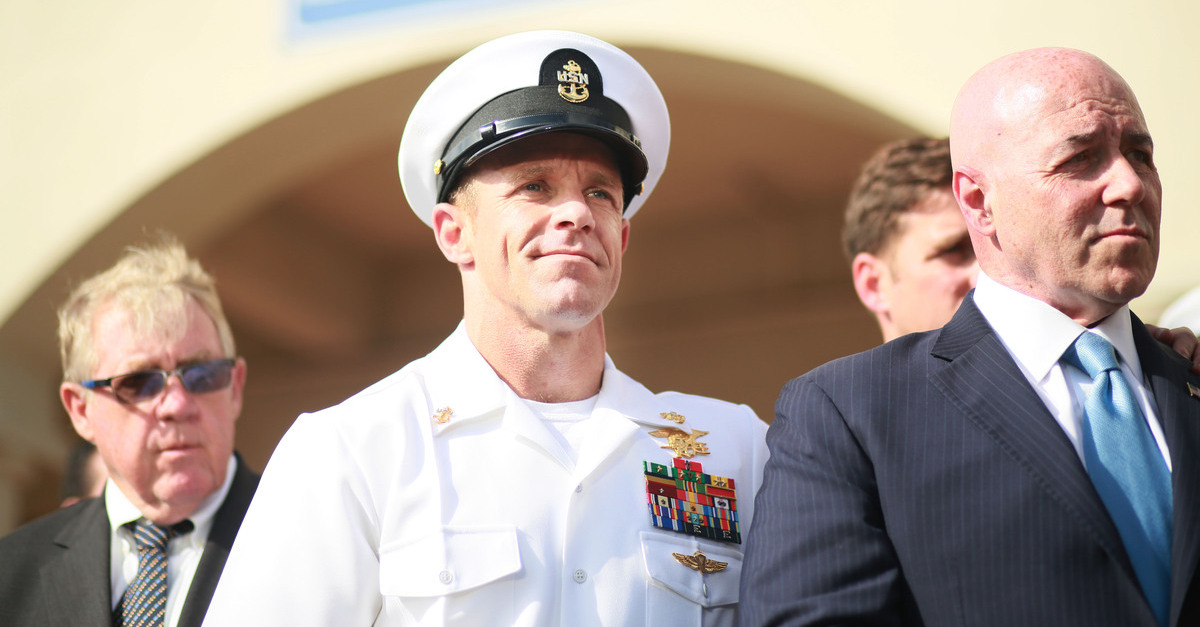 Navy SEAL Eddie Gallagher was accused of war crimes as serious as premeditated murder and attempted murder, but only ended up being convicted in July 2019 of posing for a picture with the corpse of a dead ISIS prisoner. Gallagher, despite a high-profile presidential intervention on his behalf, still faces possible expulsion from the Navy’s elite special operations force.

“The Navy will NOT be taking away Warfighter and Navy Seal Eddie Gallagher’s Trident Pin,” President Donald Trump tweeted Thursday morning. “This case was handled very badly from the beginning. Get back to business!”

The Navy will NOT be taking away Warfighter and Navy Seal Eddie Gallagher’s Trident Pin. This case was handled very badly from the beginning. Get back to business!

Despite that protestation, however, the Navy’s proceedings against Gallagher are still scheduled to continue, according to Reuters, citing Gallagher’s attorney.

In 2018, Gallagher was arrested and charged with various war crimes–including the premeditated murder of a prisoner and attempted murder of civilians in Iraq–but he was ultimately acquitted of six out the of seven charges formally filed against him. Gallagher was convicted by a military tribunal of wrongfully posing for an unofficial picture with a human casualty–a form of desecration–in July of this year.

The highly-decorated officer was demoted and handed a sentence of time-served because the maximum punishment for his conviction–four months confinement–was eclipsed by the time he’d already been detained while awaiting and during his trial.

President Trump granted a Gallagher a restoration of his rank last week. Trump’s involvement in the Gallagher case has been more than a little bit controversial, as have pardons of other U.S. service members who were accused of war crimes.

“What I’m hearing is that the rear admiral said very disparaging comments about the president and stated his disagreement with the president’s actions and said therefore I want to move forward in removing his Trident,” Parlatore told the conservative-leaning Washington Examiner on Wednesday.

Parlatore retaliated and said that he filed an inspector general complaint against Green for moving forward with the proceedings against Gallagher.

The Trident Review Board hearing will determine whether or not Gallagher is still fit to serve in the Navy’s elite fighting corps. A hearing is scheduled for December 2. Green’s decision is likely to set up a formal clash between the Navy’s high command and the 45th president.

Parlatore fumed in an interview with Reuters, telling the outlet that Trump’s decision was “unequivocal,” and describing his client’s restored rank and SEAL status as a “direct and lawful order from the commander-in-chief.”