Update: November 22, 4:12 p.m.: There was a ruling Friday in the case of Washington Post reporter Jason Rezaian. A U.S. Judge ordered Iran to pay $180 million dollars to Rezaian and his family.

The family of former FBI agent Robert (Bob) Levinson, who went missing in Iran 12 years ago, will be in a U.S. courtroom the week after Thanksgiving, demanding that the Iranian government pay $1.5 billion in compensation for their loss.

“My children and I have had to live for twelve years with the knowledge that their father was being held by a hostile regime who routinely tortures its prisoners,” Levinson’s wife Christine Levinson said in court papers filed against the Islamic Republic of Iran.

The family will make its case before federal judge Timothy J. Kelly in Washington, D.C., during a trial scheduled to begin Dec. 4. The Iranian government has not responded to the lawsuit and none of its representatives are expected to be present in court.

“What we want to do is get a default judgement, and then we would try to attach Iranian assets anywhere we could find them around the world,” said David McGee, a lawyer with the Beggs & Lane law firm. McGee is representing the Levinson family.

The family says it also hopes the lawsuit will continue to focus attention on Levinson’s plight, who was last seen in the custody of two Iranian security officers at a hotel on Kish Island, off the coast of Iran in March 2007.

According to an affidavit filed in the case by former NBC News producer Ira Silverman, Levinson had gone to the island to meet with someone who might have helped him with his investigation “of money stolen from Iranian oil sales and laundered in western countries.” Levinson, who retired from the FBI in 1998, was on an unauthorized assignment for the CIA, at the time.

The family continues to hold out hope that Levinson is still alive, although it has not received any new video or photo evidence since a series of disturbing images it received in 2011, which showed Levinson pleading for the U.S. government to deal with his captors. Dressed in an orange jumpsuit and chains, Levinson is seen holding a written message that says, “This is the result of 30 years serving for USA.”

“It was extraordinarily painful for me and my children to see my husband, their father, begging for help and be unable to do anything,” Christine Levinson said in her court affidavit. 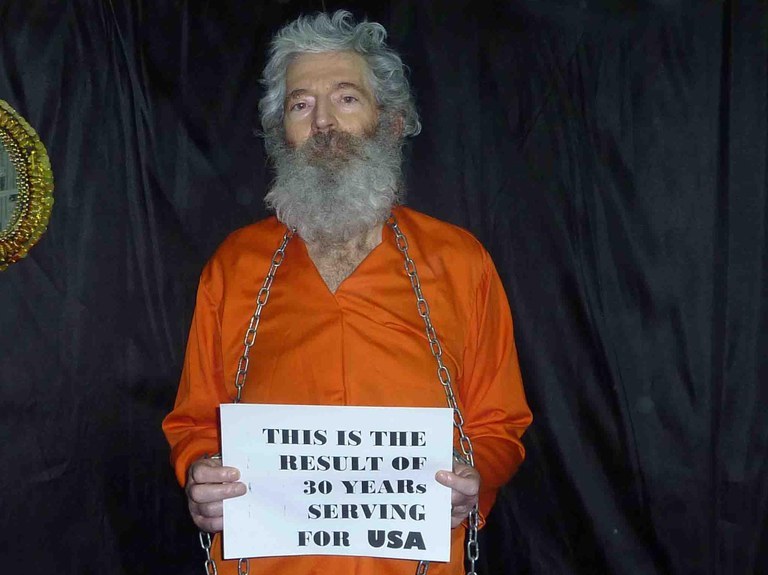 The Iranian government recently acknowledged, in a statement to the United Nations, that there was an “ongoing case in the Public Prosecution and Revolutionary Court of Tehran” involving Levinson.

Appearing on the Brian Ross Investigates program, Levinson’s son said, “For us, this is a significant development as Iran now acknowledges that he’s been over there and that he’s been kidnapped.”

Iranian officials later said the reference was to a “missing person’s case,” but Levinson’s son said that makes no sense.

Iran has also been sued by other American citizens under a “terror exception” to the law which bars lawsuits in U.S. courts against foreign governments. Washington Post reporter Jason Rezaian filed a similar suit against Iran, claiming that he was taken hostage and psychologically tortured for 18 months while on assignment there.

The Iranian permanent mission to the United Nations did not respond to a request for comment on the Levinson case.