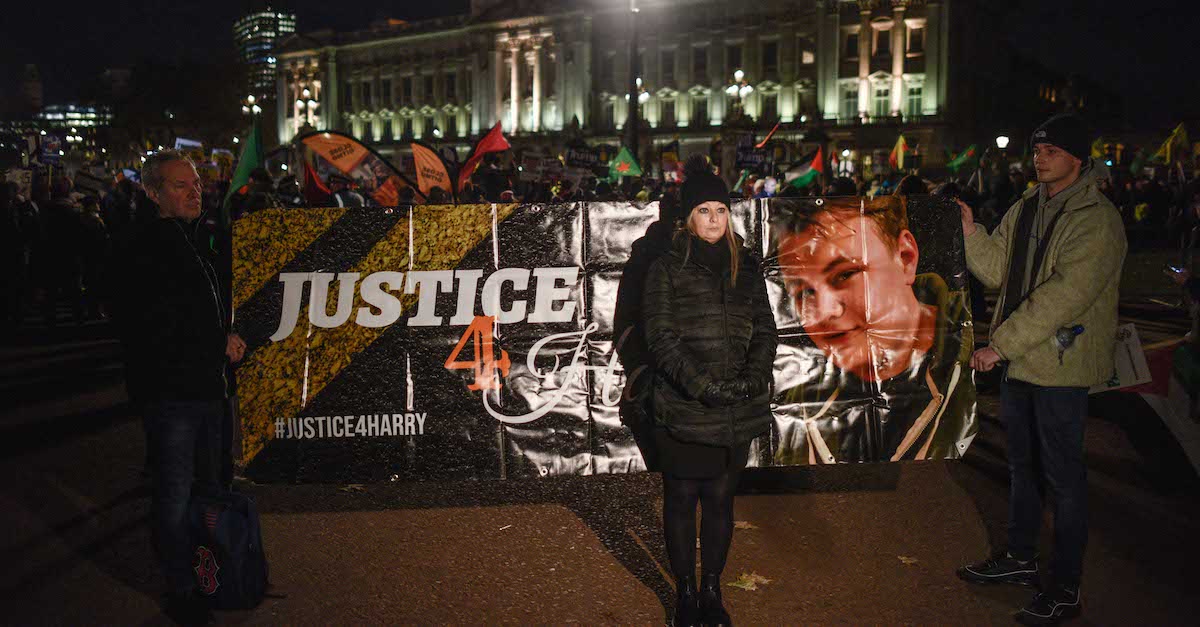 Charlotte Charles, Mother of Harry Dunn joins an anti-Donald Trump protest as NATO Leaders attend a reception at Buckingham Palace on December 3, 2019 in London, England. Harry Dunn died after being hit by a car reportedly driven by Anne Sacoolas, the wife of a US Diplomat, who then fled back to the United States of America sparking tensions.

A U.S. diplomat’s wife who, while driving on the wrong side of the road on Aug. 27, hit into and killed 19-year-old Harry Dunn in Northamptonshire has been charged in the UK for causing death by dangerous driving.

Anne Sacoolas, 42, controversially claimed diplomatic immunity after the crash near the RAF Croughton air force base, and left the UK for the United States. Now, more than 100 days later, she has been charged. Sacoolas has been urged to do the right thing: return to the UK and cooperate.

Dunn was riding a motorcycle and Sacoolas was driving an SUV on the wrong side of the road at the time of the collision.

“The Director of Public Prosecutions has met with Harry Dunn’s family to explain the basis of the decision we have made following a thorough review of the evidence available,” Smith added, cautioning against “reporting, commentary or sharing of information online which could in any way prejudice these proceedings” against Sacoolas.

The horrible circumstances sparked international controversy in October, when the victim’s parents said they were greeted with a “surprise” and a “circus” at the White House.

President Donald Trump welcomed Charlotte Charles and Tim Dunn at the White House and said “he was sorry about Harry.” That obviously wasn’t the controversial part. Unbeknownst to Charles and Dunn, Sacoolas was in another room. White House officials hoped they would agree to meet Sacoolas for the first time on U.S. soil.

Charles and Dunn had said that they would meet Sacoolas if she promised to return to the UK. They also said that was “non-negotiable.”

What ended up happening instead, their lawyer Mark Stephens said, is that Trump national security adviser Robert O’Brien arranged for a rushed and surprise meeting — in which Charles, Dunn, and Sacoolas would meet for the first time ahead of a staged hug in front the media, and the world.

Charles and Dunn only learned that Sacoolas was in another room in the White House when President Trump said so. Stephens blamed O’Brien for this, Reuters reported.

“[O’Brien has] heaped grief and pain on the family by making them go through this but not allowing them to get the closure they need by talking to Mrs. Sacoolas before they can go onto the grieving stage,” Stephens said.

Stephens called the handling of the situation a “gargantuan miscalculation” and “so wrong.” The family felt a “bit rushed.” Dunn did credit Trump for being “very gracious and respectful” during the meeting, saying he came away believing that the president would “genuinely […] look to try and resolve this.”

But Dunn also said that they rejected the idea of meeting Sacoolas after Trump mentioned the immediate possibility. He explained why.

“We said no because as we’ve been saying from the start we want to meet Mrs. Sacoolas but we want to do it in the UK so the police can interview her. We didn’t want to be sort of railroaded, not into a circus as such, but a meeting we weren’t prepared for,” he said.

“The bombshell was dropped not soon after we walked in the room: Anne Sacoolas was in the building and was willing to meet with us,” she said. “We made it very clear that as we’ve said all along … we would still love to meet with her but it has to be on our terms and on UK soil.”