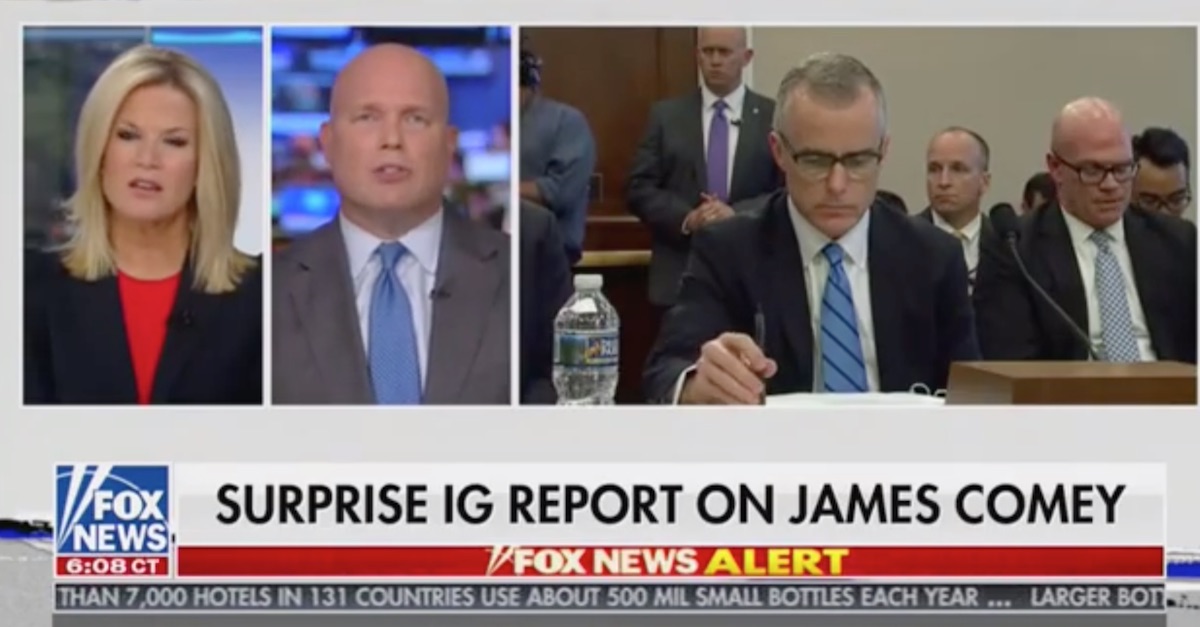 Earlier this week, it was reported that the Department of Justice was nearing a decision on whether or not to charge fired FBI Deputy Director Andrew McCabe for allegedly lying to federal agents about his role in leaks to the media regarding the FBI’s investigation into the Clinton Foundation. Former Acting Attorney General of the United States Matthew Whitaker made a Wednesday appearance on Fox News, during which he said he believed there are indications that McCabe is “imminently going to be charged.”

As the New York Times reported on Monday, the decision about McCabe is in the “final stages” and is expected to involve U.S. Attorney General William Barr’s Deputy Attorney General (DAG) Jeffrey Rosen. The Times, in particular, mentioned that “[i]n two meetings last week” McCabe’s lawyers met Rosen and “for more than an hour with the United States attorney for the District of Columbia, Jessie K. Liu.” It wasn’t said what was discussed, but it was said that McCabe’s lawyers might have been trying to “persuade them not to indict their client.”

Whitaker said that this looks like what is known as a “DAG appeal,” wherein McCabe’s lawyers may have been attempting to make a last-ditch case to the Deputy Attorney General on their client’s behalf. Whitaker, citing his experience as a U.S. Attorney, former chief of staff to Jeff Sessions and former Acting Attorney General, said that he “ha[s] not seen a DAG appeal be successful,” and argued that the meetings with DAG Rosen suggest McCabe is ” imminently going to be charged.”

“I have seen them many times, again, with sophisticated defense lawyers, but this is usually when somebody is imminently going to be charged, they try to get to the deputy attorney general and plead their case,” he said.

As Law&Crime noted before, the testimony of former FBI lawyer Lisa Page might end up coming into play in this case. Page was been identified as a key witness in a grand jury investigation of the McCabe disclosure to the media and his subsequent statements about it.

Speaking of Comey and McCabe, the OIG’s Comey Memo probe came to a close on Thursday. OIG said Comey violated his FBI employment agreement, and Department of Justice and FBI policy through the “retention, handling, and dissemination of certain Memos” documenting his meetings with President Donald Trump two years ago.

McCabe, then Acting FBI Director, was the one who referred the matter to OIG in July 2017.

McCabe was recently hired by CNN as a contributor.